It was around 1:30 a.m. on Saturday that I was driving back to Mumbai through the unlit and trucker-choked roads of the Mumbai-Pune expressway. As the odometer reading went up, I found myself counting down the few hours of sleep I’d get, lamenting the fact that I would love nothing more than to knock-out and snore away to glory like a polar bear in hibernation.

However, this was one of the few occasions when I was okay with sacrificing my sleep, since the reward was no-holds-barred fun with some Jeeps. Fast-forward to the next morning and I found myself in the middle of film city, wondering where on earth the off-road course could’ve been set up. The meeting point was an elegant setup, complete with Pink Floyd playing in the backdrop while bow-tied waiters served up glass after glass of watermelon juice and iced tea. 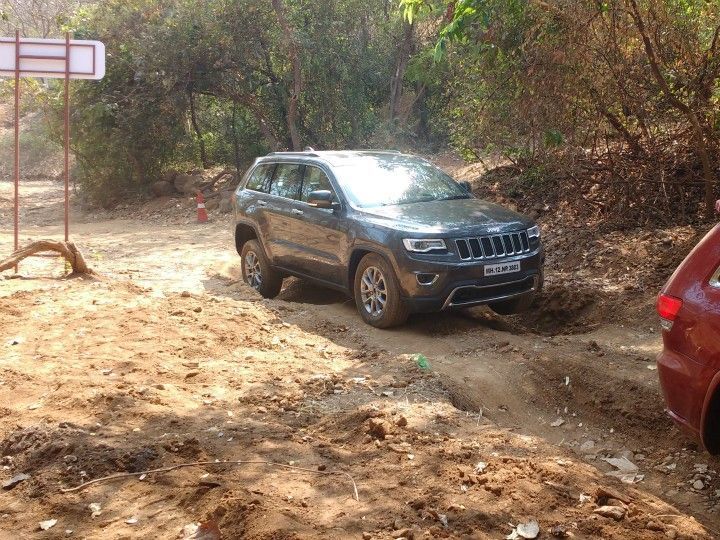 Given the fact that Jeep’s prospective customers are, well, individuals of a high net worth, the classy setup had me assume that this would be nothing more than a mild bit of rough-roading before the sales execs came snooping around for the customers’ investment information. Oh how wrong I was.

Both, the Grand Cherokee diesel and Wrangler Unlimited were available for the drive and we got behind the wheel of the latter. Our instructor drove us down the road we came up to the venue from, stopped midway, and asked the first driver to take over. Instruction number one got us all asking the same question – “What?”

You see, the driver was expected to turn right and drive into a patch of trees which cascaded down a sharp slope – the kind that you could probably rappel down. And then came another brow-raiser from our guide – “Don’t touch the brakes”. Down the stony incline we go as the Wrangler Unlimited’s hill-descent control makes the SUV work its way down in an unnervingly calm fashion. Effectively, this set the precedent for everything that followed. Viewed from the outside, every challenge seemed daunting, but the Wrangler and Grand Cherokee sailed past everything with ease, making it annoyingly difficult to get images that could capture the excitement inside the cabin.

The same trend continued through the axle twisters, up the hill-hold test, while the manoeuvrability challenge saw this near two-metre–wide behemoth swipe through the dense tree cover like a hatchback. There was quite a lot of tossing about in the cabin, but any onlooker would be misled to think this course was easy.

The Rock River proved to be one of the tricky bits. With 4-low engaged on the transfer case, the Wrangler has enough torque at idle to roll past boulders as tall as your shins, but if you do need any throttle, the slightest pedal input is enough to lick the 460Nm of torque the diesel engine offers. The result? Drivers unwittingly launching the SUV ahead and getting dangerously close to mowing down the trees ahead. No untoward incidents, fortunately; but enough to have the instructors scream, “Easy, easy, easy!”

This need for throttle modulation was seen at a 50-degree incline that demands uniform throttle inputs all the way up. Easier said than done, of course, and a few drivers needed repeated attempts, but the sense of achievement at the end was priceless.

While I made my way through this course in the Wrangler Unlimited, the more luxurious Grand Cherokee took on the same challenges with equal ease, which is what surprised me even more. The off-roading DNA isn’t something for billboards and brochures, but something that’s to be experienced.

This was, of course, the aim of the entire exercise – to give Jeep’s prospective customers a chance to test these machines in their natural habitat. Would Camp Jeep convince someone to buy one? Maybe. Would it make you want one? The answer is an unequivocal yes!