Are the updates on the Tucson enough against the competition? Here’s all of them compared on paper 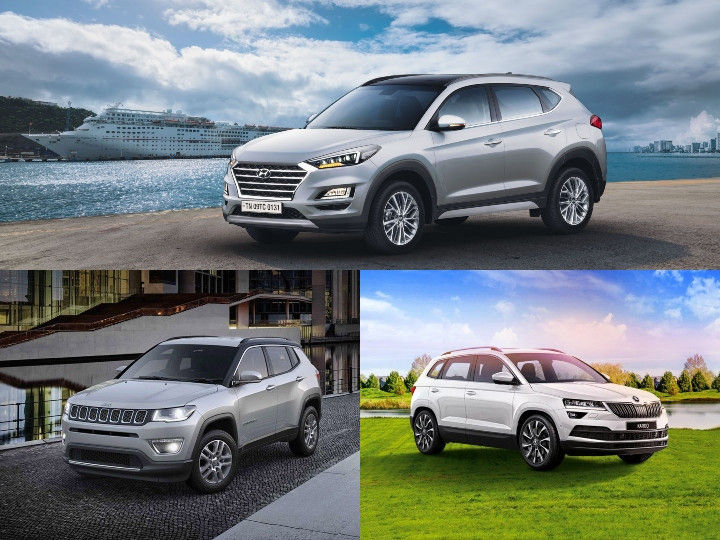 Hyundai launched the facelifted Tucson in India at a price range of Rs 22.30 lakh to Rs 27.03 lakh (ex-showroom). Not only does the Tucson get cosmetic updates, but also receives additional equipment. It locks horns with the Skoda Karoq and Jeep Compass in the Indian market. But how does the updated Tucson against the competition? Let's find out

The Hyundai Tucson dominates the competition in being the largest in all aspects. Overall, the Karoq winds up being the smallest of the bunch while the Jeep Compass has the smallest boot in this test. .

All three SUVs are loaded with a variety of creature comforts such as a touchscreen infotainment system, Android Auto and Apple CarPlay, dual-zone climate control, cruise control, a panoramic sunroof, keyless entry with push-button start, auto headlamps and wipers, and an auto-dimming interior rear view mirror.

But the Skoda Karoq edges ahead with niceties digital instrument cluster and ambient lighting while the Tucson is the only model here to feature connected car tech, ventilated front seats and a wireless phone charger. While the Compass, has the necessities covered it misses out on some of these nifty features.

Under the hood, the petrol powered Tucson boasts the biggest capacity engine off the lot and is the only non turbo engine here. The Tucson has the second highest power output at 152PS, but is the least torquey of the lot at 192Nm. While the Jeep Compass and Skoda Karoq are similar in torque figures, the former remains the most powerful of the lot at 163PS. The Tucson is the only model amongst the lineup that is paired to a 6-speed automatic transmission with the other two SUVs being paired with a sophisticated 7-speed dual clutch automatic.

Unlike the Skoda Karoq, the Hyundai Tucson and Jeep Compass get diesel engines to play with. The Tucson is the most powerful and the torquiest of the lot and is 12PS and 50Nm more powerful than the Compass. Both diesel options can also be opted with all-wheel drivetrains. However, if you hit the trails often, you might want to consider the off-road centric Compass Trailhawk. While the 8-speed automatic transmission is available on all Tucson variants, the 9-speed automatic transmission is exclusive to only 4x4 variants of the Jeep Compass. The Compass Diesel is also your only choice if you want a diesel manual SUV.

The facelifted Hyundai Tucson might be the pricier SUV here. But it justifies its premium price tag with a host of feel good features, large size and powerful diesel and petrol engines. Sure the lack of a manual gearbox might put some buyers away, but as an overall package, the Tucson facelift makes a strong case for itself than ever.