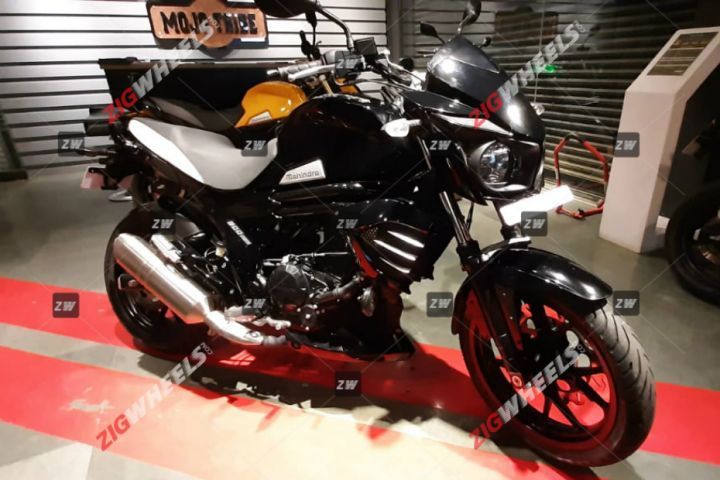 The 2019 Mahindra Mojo 300 ABS has reached dealerships and as per our sources, it will be launched in the first week of next month. This motorcycle will replace the Mojo XT 300 and UT 300 which were discontinued due to the lack of ABS. As per our sources, the motorcycle could be priced at Rs 1.8 lakh (ex-showroom). We’ve got some detailed shots of the upcoming bike which should give you a fair idea about it:

The overall design language of the Mahindra Mojo 300 ABS remains the same as its predecessor. It will feature a bulbous headlight cowl and a muscular fuel tank flanked by tank extensions which double up as radiator guards. The wide handlebars coupled with the single-piece seat should offer comfortable ergonomics as the previous-generation model. Powering the motorcycle will be a 300cc liquid-cooled single-cylinder engine which produces 27.1PS of power and 30Nm of torque. It will come with fuel injection too, so it’s pretty much a given that the engine will be BS6-ready. The engine works in conjunction with a 6-speed transmission.

In order to keep the costs competitive, Mahindra has opted for a single exhaust setup as opposed to the dual units in the Mojo XT 300. It also gets a traditional telescopic fork up front instead of the inverted unit on the Mojo XT 300.

The bike will sport the same twin halogen headlamp setup as the earlier models. We’d have liked if Mahindra had replaced them with LED units. We hope Mahindra has improved the intensity and throw of the new headlamp unit, as the older one was pretty mediocre when it came to illumination.

The semi-digital instrument cluster will remain unchanged, apart from the inclusion of the ABS light. The console houses an analogue tachometer, and a digital inset which features odometer, dual tripmeters, fuel gauge, speedometer and clock. There’s a shift light for an added dose of sportiness too.

The 2019 Mojo 300 will come with petal discs up front, reined by ByBre radial caliper. Earlier, the motorcycle used to get calipers from J.Juan and we hope the new caliper offer much superior braking prowess than the earlier setup. To comply with the new safety norms, Mahindra will offer dual-channel ABS as standard.

The rear portion of the bike looks identical to the earlier model. The tail light will be an LED unit while the indicators will be of bulb type.