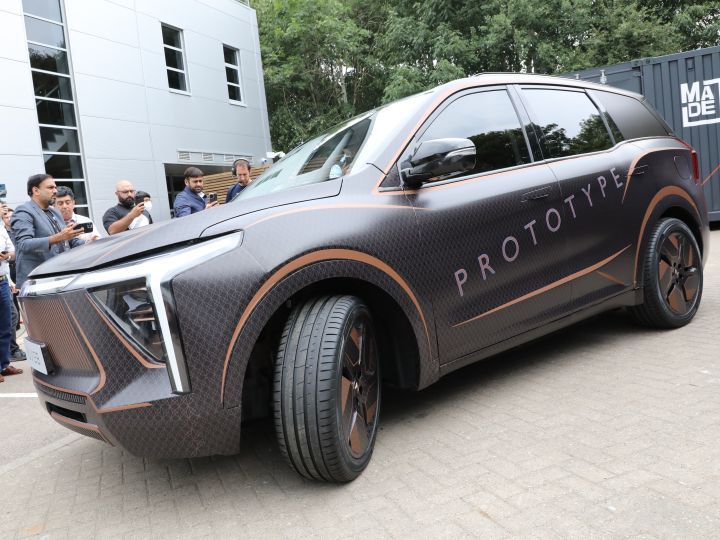 The Mahindra XUV.e8 will be the first electric SUV to be launched out of the five EVs unveiled by the carmaker on Independence day. It’ll be sold under the new XUV electric sub-brand upon its debut slated for December 2024.

For now, we’ve got a good look at the XUV.e8’s prototype version. Here’s a full look at the upcoming XUV700-based EV:

Familiar proportions on the outside

At the front, the XUV.e8 has a completely reworked front fascia with massive LED headlights and full-width-running DRLs. Below the covered-up grille, functional cooling vents sit at the bottom of the front bumper.

The XUV.e8 is underpinned by Mahindra’s new INGLO modular ground-up electric platform. Apart from its fully redesigned front fascia, the electric SUV sports similar proportions as the ICE XUV700, with an instantly recognisable side profile and rear fascia.

In addition, the XUV.e8 gets a redesigned rear bumper and aerodynamic wheels. Other than these differences, the prototype SUV looks identical to the XUV700.

The biggest thing to catch your eye inside the XUV.e8 is its massive display panel, made up of three 12.3-inch screens, that spans almost the entire width of the dashboard. In comparison, the XUV700 has a relatively smaller superscreen with dual 10.25-inch displays.

Other than that, the XUV.e8’s steering wheel, drive mode selector dial and other switchgear are largely identical to its ICE sibling. The XUV-branded electric SUVs will feature the Mahindra twin peaks logo in copper, with the silver logo reserved for the ICE range. The copper steering wheel badge and a new gear shifter are the only other changes.

Given that this is a prototype SUV, it lacks the soft-touch surfaces and plush upholstery of the XUV700 as we know it.

We aren’t sure of the e8’s specs yet, but the INGLO platform can accommodate battery sizes of 60 and 80kWh in capacity. With a peak charging rate of 175kW, the battery will be able to juice up to 80 percent within 30 minutes.

Mahindra has disclosed that the e8 will get an all-wheel drive powertrain,  indicating a dual-motor AWD setup with 340-395PS output. The powertrain components will be supplied by Volkswagen.

The XUV.e8 will get Level 2-ready driver assistance tech that’ll be even more advanced than the ADAS features offered on the existing ICE XUV700. The electric SUV will be launched in December 2024.