As promised, Volkswagen has launched the diesel engine Ameo in time for the festive season. How good is it? 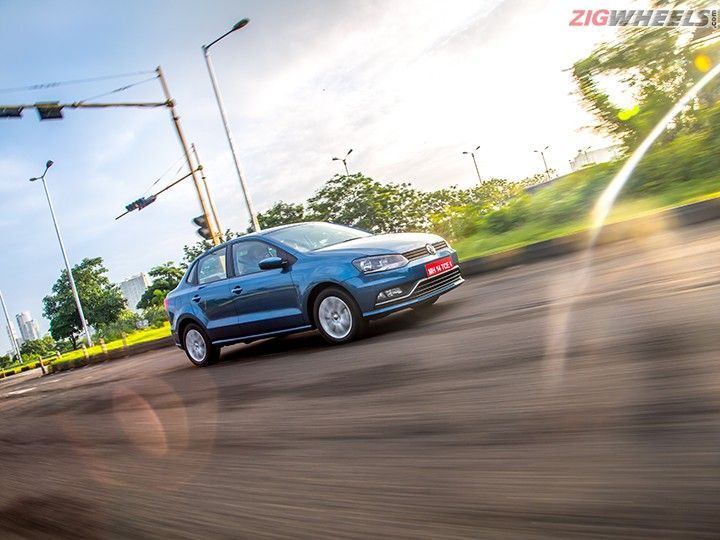 Four months after we first drove the Ameo, we are back behind its wheel, except this time it greeted us with an oil burner under its hood. While the petrol Ameo launched earlier this year had a lot going for it, performance from the 1.2-litre motor was underwhelming to say the least. We knew a rescue mission was on its way this festive season in the form of the Ameo diesel and so, we waited in anticipation. But now that it is indeed here, has the wait been worth it? We spent a day driving the car to find out.

To start with, this is the same Ameo that you have seen before (in pictures, if not in the flesh), and there’s nothing different about the diesel version except for the TDI badging at the rear. You can head straight to our Ameo petrol review if you wish to read more about the design and interiors.

The diesel mill in focus is the familiar 1.5-litre, 4-cylinder TDI unit that we’ve seen in the Polo and Vento. However in the Ameo, it puts out 110PS of power and 250Nm of torque – that’s 20PS more than the Polo and 5PS over the GT TDi! What’s more, the Ameo diesel is actually cheaper than the other two making it an even more delectable proposition. By the way, there’s one more thing Ameo owners can scream out loud from over their rooftops: it is now also the most powerful compact sedan in India topping the Ford Figo Aspire’s figures by a rather healthy 10PS!

Two transmission options are on offer: a 5-speed manual and 7-speed dual-clutch automatic gearbox. Luckily, I managed to grab the keys to the DSG first without any fistfight with the other scribes who seemed to be eyeing the car as well.

So while I got inside the car and cranked up the engine, our lensman Eshan went about stashing his camera equipment in the boot, which at 330 litres isn’t the largest in the segment but adequate enough to swallow the camera bag, tripod, two laptop bags, a generously sized snack basket from VW for us to munch on during the journey, a couple of paper bags and then some. In between, I barked out some instructions to Eshan but his confused expressions told me I was barely audible with the diesel engine clattering rather loudly. Fortunately, the noise could only be heard by those outside. Inside, VW has insulated the cabin fairly well for you to keep calm and drive on. On the move, however, there’s still a whole lot of road noise creeping but it isn’t overtly bothersome and you learn to get used to it.

Slot the lever into D and the Ameo lunges ahead with eagerness.  The gearshifts are so quick and imperceptible, the cogs shift to 7th in no time and at speeds as low as 75kmph. Pull the lever down to Sport mode and the Ameo sheds its coy façade to expose a more aggressive side. The engine note turns raspier and even the ever so slight lag that you may experience under 1,800rpm in the regular Drive mode disappears.

Shifts in the manual too are slick, the gear throws are short and you kick in to overdrive rather quickly. Just as on the DSG, turbo lag is barely discernible and past 1500rpm, the car pulls away quickly. However, with the clutch set on the heavier side you will never be guilty of skipping leg days at the gym and at least your left leg will be ensured of ample work out. Overall, I found both gearboxes equally delightful to use and it manages to alleviate whatever gripes we’ve had with the model’s petrol avatar. But it’s the DSG that gets my thumbs up despite it being pricier purely for the convenience it offers in stop and go traffic. The fuss-free operation also makes it feel leagues ahead of the AMT boxes in the Swift DZire and Tata Zest.

We didn’t quite go to the moon and back but it definitely felt so driving on Mumbai roads and thanks to the Ameo’s suspension being set up on the stiffer side. The result was immediately noticeable with the Ameo making constant crashing and thudding sounds every time it hit a pothole. Over smooth surfaces, though, the Ameo diesel stays composed and the light but accurate steering allows you to zig-zag your way through traffic confidently. But I can’t say the same about its cornering abilities especially if you are going in too hot. The Apollo Alnac tyres are likely to bear some of the responsibility on that account. Of course, in the DSG variant you also get ESP (electronic stability program) which helps to keep things in control and avoid any unnecessary drama.

Everything said and done, I feel it’s the diesel Ameo that VW should have rolled out first (instead of the petrol) purely because of the overall positive impression it has managed to leave on us. With prices ranging between Rs 6.34 lakh and Rs 9.32 lakh, the Ameo diesel is priced competitively against the DZire (Rs 6.16 lakh-Rs 8.57 lakh) and Zest (Rs 6.16 lakh-Rs 8.58 lakh) across variants barring the DSG, which is priced higher but is well worth the money! Fuel efficiency is claimed at an ARAI rated 21.66kmpl for the TDI manual while the DSG’s stands marginally higher at 21.73kmpl. It’s not the highest in the segment and is in fact much lower than some of its rivals like the Maruti Swift DZire (26.59kmpl), Ford Figo Aspire (25.83kmpl), Hyundai Xcent (24.4kmpl). But then where the Ameo truly kicks butt is with its equipment list, with several of them first in the segment! These include cruise control, rain-sensing wipers, anti-pinch power windows and static cornering lights. You also get a touchscreen infotainment system with MirrorLink, rearview camera with parking sensors, cooled glovebox, rear AC vents, steering-mounted audio and Bluetooth controls, all four power windows – the list is long and we’d advise you spend some quiet time in the library to read through the brochure and absorb details fully.

Is the Ameo diesel then the perfect compact sedan in the market now? A massive comparison is in the offing for a decision to be made on that but I don’t see why it can’t be one. It’s built well, packs an awesome amount of features, drives like a dream and is high on safety too with ABS and dual airbags standard across variants!  Sure, it still falls short in some departments such as rear-seat space, the boot and perhaps even mileage but the trade-offs are too few when you look at the overall value the Ameo diesel brings.