The second generation CLS is elegance personified rather than being the pimped up E-Class sedan that the first generation was perceived to be. Abhishek Nigam revels in the power and the luxury of a very fine and focused sedan sporting the three-pointed star 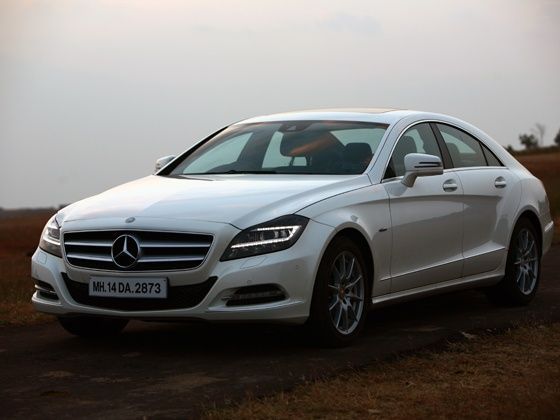 The battle between the head and the heart, the analytical and romantic sides of our nature, is an eternal one. But in the car business, emotions sell cars to enthusiasts as effectively as numbers do to fleet operators.

The 4-door Coupe is born

In the late ‘90s, the designers at Mercedes looked at the four-door car and asked themselves what it might do in the 21st century. The answer resulted in a rewrite of the book that said this type of car had to be upright and staid. Taking the underpinnings of the then new W211 E-Class and putting them through a Clark Kent-to-Superman act, what emerged from the design studio was the sleek Vision CLS concept car that stole the show at Frankfurt in 2003. Since then the world of the four-door has continued to change, and it seems the CLS was a catalyst of that change. If imitation is the sincerest form of flattery, then VW’s Passat CC is an unabashed CLS clone, albeit downmarket. And how did the Mercedes designers react to the fact that the CLS is now being challenged in the style stakes by new blood like the A7 Sportback and the forthcoming BMW four-door coupe? What would the second generation CLS have to do to make an equally good living in the second decade of the 21st century? So does the new 2012 car redeem itself, considering all the new competition it’s facing? Let’s find out.

For starters, it retains its unmistakable flair with the long bonnet, short rear boot lid, frameless side windows and roofline which gradually drop towards the end of the car. The proportions of the design have stayed unchanged. Yet the second generation CLS has a completely new and welcome well-toned look about it. The front of the car has clearly borrowed some bits from the new SLS AMG. It now looks much more aggressive and the large star in the radiator grille won’t go un-noticed. Distinguishing and also technically interesting are the headlamps, where all of the regular dynamic light functions use LED technology. A total of 71 LEDs are in three arrow-shaped layers.

The upper layer contains the LED indicator, the second layer is the LED side light offering LED low beam functions and the lowest level of the headlamp houses the main beam and night view functions. The rear lights have a familiar triangular shape, but are much more rounded than before. The new CLS surely looks good, but it also looks much more mature now. But for me, the first gen CLS or the W219 is still the pick of the lot. The new car’s more muscular stance is strengthened by the wide track employed, which push the wheels close to the edge of the arches. Despite the more fussy body detailing, the aerodynamicists have done a good job in airflow management and the Cd of 0.26 is brilliant for a car of its size and heft.

The new interior reflects the evolutionary thought process applied within the cabin as well. As with the exterior, the cabin architecture is smart casual to the E-Class’ formal and more upright stature. Both in form and material look and feel, the CLS interior is more special, less obviously mass produced. Of course as with all Mercedes models, there are different levels of trim that can be specified.

Up front, drivers are faced with the same flowing lines and curbed surfaces as the car’s exterior. Coupled with the electric memory seats, the car’s interior sports a mixture of leather inserts, silver metallic and chrome, evoking plenty of ‘oohs’ and ‘aahs’ harmoniously from its occupants. Despite its sloping roofline, the CLS doesn’t compromise its roominess even for tall passengers in the rear bench. Measuring 4940mm (L) x 1881mm (W) x 1416mm (H), the cabin allows ample head and leg room for occupants all-round while allowing them to seek comfort in the luxurious leather-swathed seats. Speaking about numbers, the new car is now 20mm wider in front and 30mm wider in the rear with a slightly taller roofline as well. The extra room is more than welcome and at the same time the reshaped doors also make ingress and egress a much easier process.

While the 350 badge is retained, the 3.5-litre V6 gets a host of changes. In fact on paper, the specification of the new generation M276 3.5-litre V6 quad-cam motor could be mistaken for the Sport version of the outgoing M272 used in the SLK350 and also in the SL350 from 2008 on. The new direct-injection motor in the CLS350 BlueEfficiency now makes 306PS @ 6500rpm and a creamy 307Nm of torque between 3500rpm and 5250rpm. Mercedes also claims 20 per cent lower fuel consumption than the predecessor model and correspondingly lower CO2 emissions as well.

Handling transmission duties is an all new 7-speed automatic gearbox, badged the 7G-Tronic. In fact all CLS variants use the same gearbox. However they are optimised in line with the model in which it is installed. This new transmission has been significantly improved in terms of economy, driving dynamics and ride comfort. With its short shift times and almost imperceptible gear changes, the system ensures the engine is always operating at the optimum speed to minimise fuel consumption. NVH is at an absolute minimum to enhance the driving pleasure further. Thanks to all that techno input there is none of that lag which is normally associated with slush boxes and the CLS responds even more directly to the accelerator pedal.

Twist the key and the V6 engine rumbles to life. At idle, the big sleek Merc is eerily quite and one literally has to rev the engine to find out it’s on. In normal driving, the new V6 is smooth and quiet and wafts about with the poise of a typical Merc. But to change its character, just switch to the paddles, drop a gear, get the rev needle in the meaty zone and floor it. The silent hum is immediately transformed into an angry roar and the 1.7-tonne car propels itself forward with a vigour that will pin the passengers to their seat backs.

Given the displacement at its command and the sheer bit of dazzling engine tech, the CLS is joy personified in the aural department as it strokes its way from rest to 100km/h in 6.5 seconds. Keeping the throttle buried saw the speedo needle swoop past 245km/h before we ran out of road. In-gear acceleration is just as impressive and the CLS just keeps riding that wave of never ending torque. Thanks to its well matched gear ratios the CLS 350 returned more than decent fuel efficiency as well, churning out 10kmpl around town and 12.5kmpl on the highway.

Keeping the car firmly planted at those silly speeds is the brilliant AIRMATIC suspension that allows the driver to adapt the car’s handling precisely in line with his needs. The suspension with adaptive vibration dampers aligns itself in line with the current road and driving conditions, thus reducing road roar and tyre vibration levels.

At higher speeds, the car is lowered automatically in order to improve driving stability, aerodynamics and fuel consumption. The electromechanical assisted steering though a little on the lighter side is fairly direct making it more fun than the E-Class on which the CLS is based. Then there is the Direct-Steer system which reduces the steering effort required by making the steering ratio increasingly more direct when negotiating tight bends or parking. At high speeds, on the other hand, the emphasis is on straight line stability, leading to improved vehicle agility and steering comfort.

The first CLS was something new and completely different than anything else available at the time. It offered the grace and sleek lines of a coupe while at the same time being as practical as your everyday sedan. This second generation offering with a sticker price of Rs 67.67 lakh (ex-showroom Mumbai) continues with the same concept offering an even better package thanks to increased power, driving pleasure and equipment and also of course an even better looking package for the stylistas among the high heeled set. With its larger, more airy cabin making it even more practical, the more purposeful looking new CLS may well even win over the small group who hesitated buying the original car and we predict that it will be an even bigger success than its predecessor.