The Hero Duet is Hero MotoCorp’s new unisex scooter, positioned as a family scooter. And it’s built on a brand new scooter platform developed by Hero R&D. We take the Duet for a quick spin… 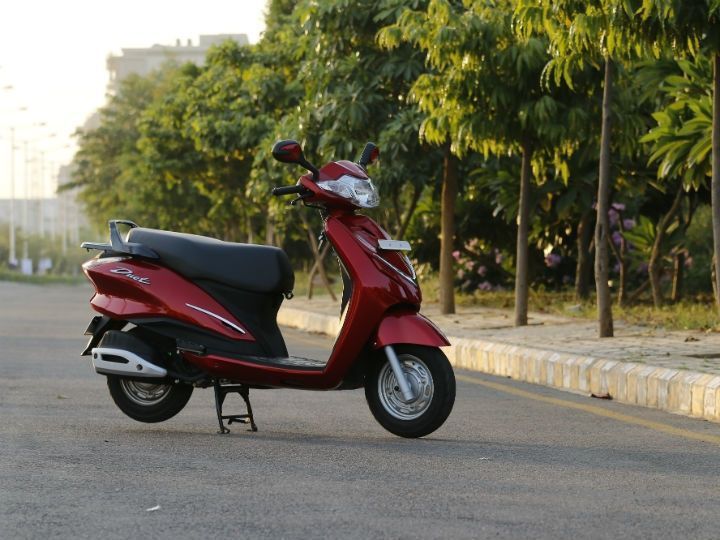 The Duet is one of Hero’s two brand new scooters – developed in-house and built on a completely new platform. Unlike its sibling, the brawny and masculine Maestro Edge, the Duet has been positioned for the mass market, and for both men and women. And it's going to be the entry level scooter for the masses from Hero.

Up until now, Hero MotoCorp has had two scooter models in its product portfolio – the Hero Maestro and the Hero Pleasure. The Maestro is positioned as a male scooter while the Pleasure is marketed as a scooter for ladies. Hero however, is marketing the Duet as a unisex scooter, so it will be positioned right between the flagship Maestro Edge, Maestro and the Pleasure.

The Duet is expected to be ridden by the whole family, and going by the positioning, the company expects it to be the torchbearer for scooter sales. We spend some time with the Duet to know more about this new Hero.

One look and you know, there’s a quiet confidence about the Duet’s looks which will certainly find appreciation in the Indian scooter market. The body is all-metal, so it gives a sense of durability and better build quality.

Overall, the shape and design is comparable to the best selling scooters in the market right now, like the Honda Activa, but the Duet gets some unique touches, both in design and features.

The Duet gets a friendly face and a chrome strip across the front apron adds a dash of style to an otherwise simple design. The headlight with integrated indicators is not pathbreaking, but the body coloured rear view mirrors again add a bit of ‘premium-ness’ to the scooter.

The side panels also get a chrome strip pointing towards the ‘Duet’ badge and towards the rear, the taillight gets a bit of curvy treatment; you may like it, you may not, but it’s not an eyesore.

The instrument panel is part-digital, part-analog; with features like service due indicator and side stand indicator. The switchgear is of good quality and like the Maestro Edge, the Duet also gets a ‘pass’ switch. The multi-function ignition key works as steering lock, remote seat opening as well as remote fuel lid opening, which, again is placed externally for more convenience.

There’s ample underseat storage and it also gets a boot light and USB 3.0 charging socket. At the rear, there’s a handy black grab rail, which also has load carrying capacity of up to 10kg and gets hooks for tying down your shopping or luggage with bungee cords and the like.

Power and torque figures are comparable to the competition, like the Honda Activa and the TVS Jupiter, but on the Duet, the engine makes maximum power and peak torque at higher rpms.

What this means is, you need to open the Duet’s throttle more to get full power from the engine. Now, this may not mean much for the average scooter rider, but if you want a scooter which is quick on its wheels, the Duet may not excite you.

The engine however, is a refined unit, and full points to Hero R&D on that. The refinement is present whether you are at 40kmph or have the throttle wide open at 80kmph. To get to 80kmph however, takes time and more throttle input. So, the Duet may not be great at overtaking in case you intend to get it to do highway duty every once in a while.

Ride quality of the Duet is pretty good. In fact, it’s right up there with the best of scooters in this segment. The telescopic front suspension does its job well, so whether you are negotiating speed breakers or going over broken tarmac and small potholes, the Duet is stable, composed and confident.

Then there’s the new chassis – handling is pretty good too, and the Duet took to corners without any protest or giving any sense of getting unsettled. Although not meant to take high speed corners, the Duet, if required, will confidently take on turns at speed, without the rider losing confidence on the stability and handling of the scooter.

The Duet gets drum brakes at both ends, but also gets the Integrated Braking system, which essentially activates brakes on both wheels from a single lever. And braking is pretty good. On our brief test ride, the brakes performed to satisfaction and the Duet shaved off speed under hard braking without the scooter getting unsettled or giving the rider any cause for panic.

The Duet has a lot of things going for it. It’s got an understated design; not too loud, yet elegant in its own way. An all-metal body gives it a sense of durability and the refined engine, though not made for exciting performance, has been tuned for good fuel economy. (Hero claims 63.8kmpl). Then there are great features which the quintessential scooter buyer will certainly welcome.

Now, as we mentioned earlier, Hero is expecting the Duet to lead its scooter sales, positioning it as a family scooter. So, the parent can ride it to work, the brother or sister can ride it to college or classes, and it can also make the trip to the neighbourhood market for the weekly shopping.

What remains is the price, and Hero is expected to announce that later this month. The Duet certainly is expected to be priced lower than the Maestro Edge, which retails at Rs 49,500 for the LX version. So, great product and the right pricing, and you can expect to see a lot of Duets on the streets.