An MTB that’s just as easy to ride in the trails as in the city? 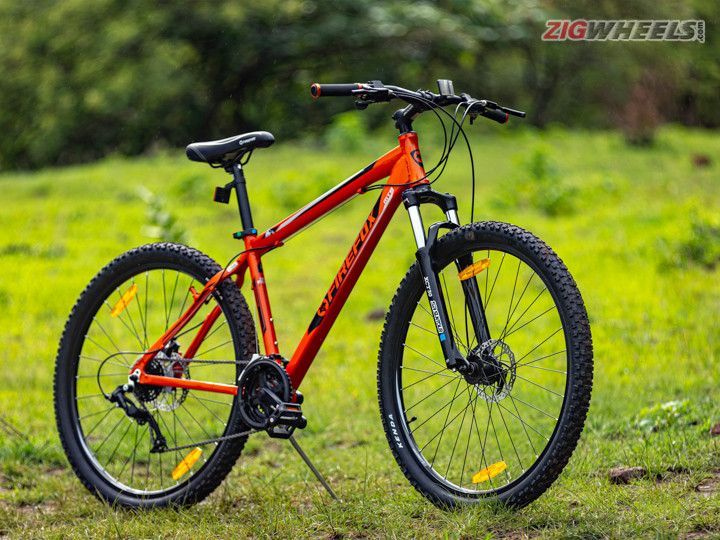 Ok let’s admit it, we at ZigWheels aren’t professional cyclists, far from it in fact. But we have tested a few cycles in the past like the Trek Marlin 7, Marlin 4 and the Hero EZephyr, so we weren’t going to pass on the opportunity when Firefox approached us with their mountain bike, the Maximus 29 D.

The mid-tier bike is pegged as an MTB that offers the functionality of casual city cycling. And that’s exactly what we are here to answer.

The whole cycle was shipped to us in a box. All it took was an Allen key and a spanner to put everything together in a matter of minutes. This included the wheels, pedals and straightening the handlebar and reflectors. The wheels which come with torque levers plonk on in a matter of seconds.  Even a kid could pull off putting together the entire setup.

And if you were to take the cycle in your car, it’s just as easy to disassemble. The only slightly tricky part is the rear wheel assembly which houses the crankset. But it’s not that hard to figure out once you get the hang of it.

Put everything together and the first thing you’d notice is how light the cycle feels. It weighs in at 15.5kg, but the weight is well distributed, so you don’t really feel it when you pick it up or when you’re riding it. I, for example, had to climb four flights of stairs to store the bike in my house when I wasn’t using it. Not once did I gasp for breath or run out of energy at the end of it.

I’ve had some experience with MTBs in the past but none of them felt as easy to ride as the Maximus. Sure, it’s not as sophisticated as the others, but the Maximus truly feels at home, be it in the city or light trails. And that’s partly because it’s not a hardcore MTB. The sticker on the frame clearly suggests so.

The bike does have a preload-adjustable front shock that absorbers bumps and potholes well. You could even lock the setup while on the road which prevents it from compressing, thereby leading to less fatigue.

The wide handlebar offers enough leverage to steer the bike and make quick directional changes which is especially useful on trails. What’s also worth mentioning is the ergonomics. You sit in a slightly leaned forward position, but it doesn’t really feel tiring at any point. I rode the bike for over 70km (separate rides of course) for the duration I had it, and I absolutely loved every bit.

You don’t need to be a professional cyclist to really appreciate the bike. Anyone, from a college-going student to a middle-aged man can hop on and feel at home. What we would recommend getting is a gel seat cover for the saddle. Why? Well, we’ll get to that in a bit.

The Maximus features a 24-speed drivetrain from Microshift (a triple chainring setup with an 8-speed rear cassette), which I believe is more than enough for the average user. The shifts are clean and precise. But what may bother you a bit are the micro shifters. The entire setup is really compact, which is nice, but the thumb shifter used for upshifts is a little too small in our opinion. There were times when I had to look down at the shifter before moving up a gear. But I guess it’s just a matter of getting used to it.

Having 24 gears to choose from gives you a broader range, or choice, of gears for a given situation, ranging from hill climbs, down slopes or arrow-straight roads. You just need to understand which gears need to be used in a particular situation. Higher gears, for example, help you achieve high speeds. Lower gears, on the other hand, are better suited to accelerate from a standstill or to climb a steep hill.

You would expect Firefox to cut a few corners in a bid to price the Maximus competitively. But that’s not the case. The overall build quality is fantastic for this price range. The welds are neat and clean and the paint - exquisite! The quality  of the plastic, too, is pretty good. Everything feels sturdy and built to last.

This isn’t a deal-breaker, but it’s worth mentioning. The seat on the Maximus is way too narrow to accommodate even an average-sized posterior. It also lacks cushioning so you end up feeling most bumps or potholes. But there’s obviously a quick and easy fix. Just throw in a gel seat and you should be good to go. The only problem then is the width of the seat.

The bike comes with disc brakes at both ends which offer good feel and progression. We only wished it had a better bite.

This was a bit annoying. You see the side stand is mounted right behind the pedals. So when it’s parked and you need to move it around it tends to interfere with the pedals by locking out the rotation. This could also be a problem if you’re trying to lubricate the chain and need to rotate the rear wheel. That simply won’t be possible.

I spent my fair share of saddle time on the Maximus during the second lockdown, riding it around in my society, running errands or simply hitting light trails on the weekend. And I loved every moment I spent on the bike. It’s simple and really easy to get used to. Not to mention, it’s a lot more practical than the bikes I’ve ridden before, because it’s not a full-fledged MTB.

Sure it’s not perfect, but I haven’t come across any cycle that is. And at a price of Rs 34,600, it’s really hard to argue with. However, if you’re looking for a slightly more serious MTB, you could check out the new Trek Marlin 4 at Rs 37,699.