The Honda Amaze could be the company’s stepping stone back to greatness. Check out all the important photos of the car below 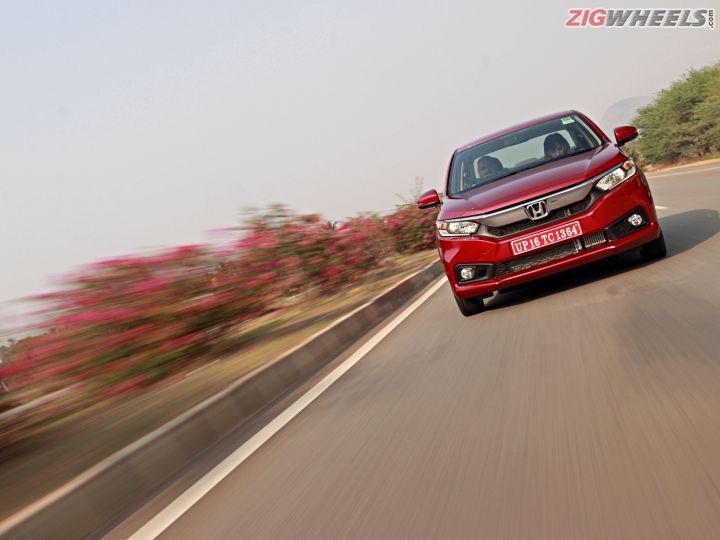 “... there’s no doubt about it: Honda has taken the right steps to be respected and revered once more.” - Read more of our first impressions of the 2018 Honda Amaze here. Ton-load of photos below -

“Let’s make the Amaze look like one as much as possible,” seemed to be the brief given to Honda’s designers.

The front end is dominated by Honda’s signature ‘Solid Wing Face’ grille ornament which extends to the headlamps. The bumper is boldly sculpted and uses a lot of black elements to give it a sporty look.

Unlike the competition, the Amaze misses out on LED DRLs (what you see are LED guide lights; they need to be switched on manually) and projector headlamps.

No smooth edges anywhere, part of the reason why the new Amaze looks muscular. If it looks bigger than before, that is because it is. The new Amaze has a 65mm longer wheelbase than before.

The hood extends as much as the bumper! This had to be done to accommodate the engine and its components, which have been pushed forward to free up space in the cabin. Also note the new 15-inch alloy wheels which do a better job blending in with the design than the 14-inch units on the previous car.

Here you can see how much forward the radiator and the engine have been pushed.

The LED indicators on the ORVMs are now slimmer. Honda says this adds a bit of premiumness to the new Amaze.

We know that at least the top two variants, V and VX, will be offered with keyless-entry-and-go. Keep the key in your pocket, grab the driver side door handle and the car unlocks. Press the sensor on the handle to unlock.

The boxy design continues to the rear. The large taillamps now have a split element which extends onto the boot, though the bit on the boot is just a reflector.

Depending on who you ask, Honda could have made the Amaze’s rear look better by offering a chrome garnish on the boot. The rear looks a bit heavy on the Amaze, especially in this signature red paint option. Maybe Honda will offer one as a dealer option? Rear parking sensors are also offered on the penultimate V variant.

The doors open wide to aid easy ingress and egress. Soft fabric is placed beside the armrests on the doors for comfort.

Backlit switches on the door pad are easy to use at night. All the power window switches should have been backlit though. Auto-up/down for the driver power window only.

Both the front and rear door pockets can hold 1-litre water bottles with ease, along with some other knick-knacks.

The sense of space on the inside is enhanced by the use of beige almost everywhere, including the fabric seat covers. Matte black, piano black and grey trim have been used to break up the sea of beige in the cabin.

The rear bench is wide, though seating three will not be very comfortable. There is no headrest for the centre passenger, the armrest juts out a bit and he/she will have to do with a lap belt rather than the safer three-point seatbelt.

Apart from the manual transmission.

The Amaze VX variant is the only one to get Honda’s new ‘DigiPad 2.0’ touchscreen infotainment system.

The Digipad 2.0 is impressive; Honda has taken user feedback seriously. The screen is more responsive, more customisable and has better connectivity options than before.

Apple CarPlay and Android Auto are now on offer.

And so is an updated, detailed inbuilt satellite navigation system powered by MapMyIndia.

The automatic variants also miss out on cruise control, which is exclusive to the manual transmission-equipped top-of-the-line VX variant.

The watch-face like dials on the instrument cluster and the large, informative MID feel premium and are easy to read at a glance.

The start-stop button pulsates white when you get in and press the clutch/brake (depending on the transmission), and turns red when you switch the car on.

The multimedia/telephony and cruise control buttons have a solid feel, though the clear plastics on the test cars had already begun to fade.

Rear passengers will also benefit from an extra bottle holder and a dedicated 12V power outlet. No A/C vents at the rear.

Honda has added a bigger compressor to the Amaze, which did well to cool down the cabin in a surprisingly hot Bangalore even without the rear A/C vents. Also note that the recirculate function is no longer controlled by a lever; the new A/C console gets the button to do it instead.

The 420-litre boot is the largest in the segment. Space is usable, though the loading lip is a bit high.

Yes, that is a CVT transmission stick…

…. paired to a diesel engine! The first of its kind in its segment, and in India. While it uses the same 1.5-litre, 4-cylinder turbocharged diesel engine, Honda has to downtune the engine to 80PS(-20PS) and 160Nm(-40Nm) in the interest of driveability and efficiency.

The power and torque deficiency, coupled to the smooth power delivery thanks to the CVT, makes the Amaze Diesel CVT best suited to be used in the city. It does make a great case for itself in the city, even more so than the manual-transmission variants. Now only if Honda offered the CVT with the VX trim.

The CVT is also available with the petrol engine, but this is at best - meh.

In fact, the petrol-powered Amaze makes sense only for those who do not like the diesel engine’s clatter and will not be driving their cars a lot. The diesel is quieter on the new Amaze, but it cannot hold a candle to the super quiet petrol. In terms of driveability, mileage, performance and long-term returns the diesel engine-powered variants still make sense.

The new Honda Amaze certainly has what it takes to give the competition a serious headache, especially in its diesel variants. But Honda needs to offer the CVT with all the features, as customers are not adverse to paying for good features.

Honda also has some after-sales tricks up its sleeves. It claims lower regular maintenance costs thanks to longer durations between part changes. The Amaze will also be offered with longer warranty and attractive roadside assistance and yearly maintenance packages when launched.