The RC twins get a mid-life update, and pretty much to our delight, the 390 gets some mechanical ones too 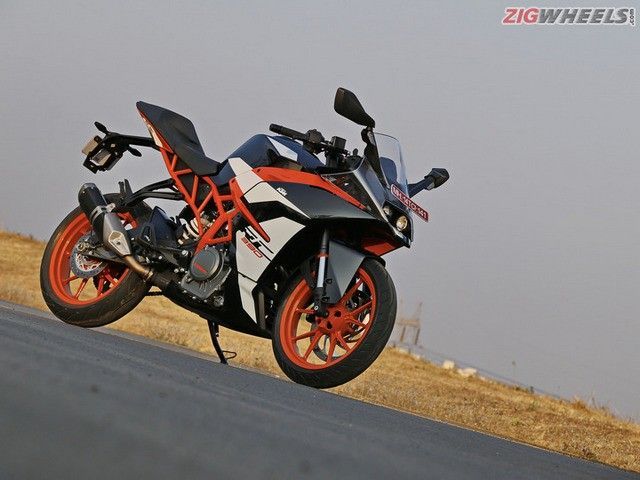 Bajaj Auto has probably never believed in the adage “If it ain’t broke, don’t fix it”. The manufacturer updated its Pulsar range at regular intervals, despite nothing really being wrong, and the trend continues with the KTMs. It has been just about two years since the RC twins were launched, but they’ve gone under the scalpel already. The bikes weren’t even beginning to feel old just yet, but we guess the boffins at KTM felt otherwise.

Interestingly, the bigger and more powerful RC 390 gets a handful of mechanical updates as well, apart from a new paint job. So is it now more enjoyable as a compact supersport? I rode the new bike at the very venue where I had my first rendezvous with the RC 390, which is Bajaj Auto’s own test track near Pune. Back then we got nearly half a day to ride, but this time around it was just a dozen odd laps. Despite the limited seat time, the findings on track were interesting.

As the norm is, the RC 390 gets fresh decals and a revised paint scheme. It looks fresher, and now gets more black and orange on the tank and fairing. The tail piece features an RC 390 badge apart from stickering on the sides of the fairing to not confuse it with the 200. The cosmetic changes I’m informed are courtesy feedback from customers, who wanted some visual differentiation from the RC 200. The paint is now UV resistant and should offer better fade resistance, and the bike gets what KTM calls the ‘Can Bus’, which is one large hose holding all cables. This makes for a cleaner look, as there’s no loose cables hanging around.

The biggest change visually is the side-mounted exhaust to meet BS IV emission norms, and it is a lot better to look at. What you might not notice is that the fairing’s underbelly is different thanks to the new exhaust. It is slimmer, and offers better ground clearance which should aid when leaned over. It is also possible to miss the bigger front rotor, which is up to 320mm now from the earlier 300mm. Another important change is the adoption of wider stalks for the rear view mirrors – they offer a far better view, and are a lot more useable now. The 390 also gets adjustable clutch and brake levers – they can be adjusted for reach, which is a nice touch and adds to the premium feel. Then there's the AHO (All-time Headlamp On) function. As a matter of fact, the RC 390's headlights were always on, but with AHO, the on-off switch for the headlights is gone now.

Of course not. There’s a host of mechanical updates, and the addition of ride by wire, or an electronic throttle has to be the highlight. The result is a smoother, crisper throttle response, as the throttle is controlled by electronic sensors and not a cable, thereby offering better precision. The throttle also feels lighter, as I discovered. Ride by wire has also made the low speed jerkiness of the throttle go away, which should make for smoother rides in traffic or even when manoeuvring through parking lots.

The RC 390 had a slipper clutch already, and that continues be a boon during aggressive downshifts. The side mounted end can has caused a slight change in the exhaust note, and the bike now sounds slightly quieter. The 2017 RC 390 also gets an ECVAP system (Evaporative Emission Control System) which prevents fuel vapours from the tank and fuelling system from escaping into the air, thereby reducing losses.

How is it to ride?

The mechanical changes do make the RC 390 more enjoyable on track. Bajaj’s test track boasts a longish straight, a couple of fast corners and a whole bunch of slow, tight ones. That’s a good mix for the RC 390, and I was able to see 166kmph on the straight before having to brake for the fast left hander. There’s a slightly more direct feel to the acceleration, whether taking off from standstill or accelerating through gears, and the improved responsiveness is tangible. Throttle openings around corners were noticeably smoother, and thanks to the crisper response throttle control felt more precise too.

Power output is the same at 43.5PS despite the changes to meet BS IV norms, though torque output is up by 1Nm and stands at 36Nm now. Needless to say, you don’t really feel the additional twisting force, though the quicker engine response tries to offer a torquier feel. The side mounted exhaust has added about 6kg to the weight we’re told, but again, that’s something you’ll probably not realise on the go. We couldn’t test the new RC 390 for acceleration, but it could just be a smidgen quicker to 100kmph with its crisper response and additional 1Nm of torque. Admittedly, that’s not a sea change and you won’t realise the difference unless doing a quarter-mile run. The highlight is the lighter, crisper feel from the throttle that should make for better rides.

The changes elicit a more likeable feel, and the RC 390 feels sharper in the performance department. Which means the powertrain now compliments the bike’s handling even more. The RC 390 has benefitted from KTM’s immense racing experience and is easily the sharpest handler in its class. Lest you forget, the Austrian manufacturer is making its MotoGP debut this season! The chassis hasn’t changed and offers the same sublime feel as before, and the bike feels confident when making quick directional changes or flicking from side to side. The firm suspension from White Power continues its commendable job of aiding the class-leading handling characteristics from the chassis, while the Metzeler Sportec M5 tyres offer immense grip and confidence as always, and are one of the biggest reasons behind the bike’s superb handling. The good news is that the tyres are now expected to have a longer life than before, and should last a couple of thousand kilometres more than the older tyres’ average life of 10,000km.

Moving to the brakes, the bigger front disc afforded more confidence and offered more bite, particularly when braking from high speeds. The front brake never lacked a progressive feel, and with the bigger disc there’s more bite now. A VBOX test should help confirm that braking distances are shorter now. The ABS isn’t too intrusive either, and does not take away the progressive feel. The slipper clutch allowed slamming down through the gearbox in a jiffy, especially when slowing down from high speeds, and ensured the rear wheel didn’t start hopping.

If you are in the market for a light, powerful, sharp-handling sportsbike, then certainly yes. The RC 390 in fact now makes a stronger case for itself with the set of updates. If you already own an RC 390, the 2017 model may not really be an upgrade, but if you are moving up from a smaller machine and want a focussed, no nonsense sportsbike that can be quick on track and fun on the road, this is a bike you should consider, especially looking at its value for money quotient. Despite the price hike, the RC 390 is still fantastic value for money at Rs 2.25 lakh ex-showroom New Delhi. The riding position is committed and is more suited for track use than road, but that doesn’t really take away much from the bike’s impressiveness. The changes have made the new RC 390 friendlier, particularly ride by wire and better brakes, and a full road test should help us asses the updates better, particularly on the road.