Barring the M3/M4 this is the closest you can get to a true-blue driver's car in the 3 Series lineup. How is it? 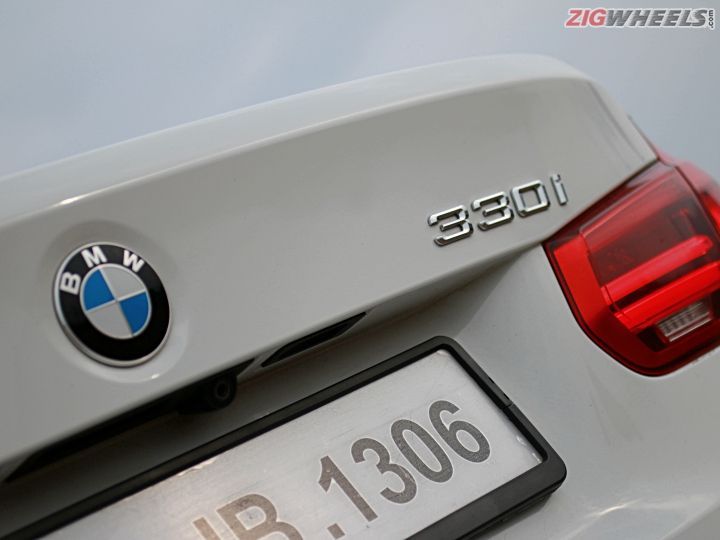 For those who know, the 330i badge is special. Previously, it would mean that you were getting a screaming in-line 6-cylinder engine under the bonnet of a very compact sporty sedan. A generation later, that badge seems to have lost its meaning; the new 330i is powered by a turbocharged 4-cylinder motor.

In a world where the average buyer expects every car to be an all-rounder, it is difficult to cater to the uncompromising enthusiast. Downsizing and turbocharging is the name of the game and so the new BMW 3 Series 330i is powered by a potent 2.0-litre, 4-cylinder turbocharged petrol engine developing 252PS of maximum power and 350Nm of peak torque, paired to an 8-speed automatic transmission. When compared to the 6-cylinder 330i, power has gone down by 6PS, but peak torque has gone up by 50Nm and is spread over a larger rev range. There shouldn’t be any complaints about performance then.

Also Read: This 2.0-litre motor also powers the MINI Cooper S and we have reviewed it!

Depending on your mood you can choose from four different drive modes which change the throttle response, transmission response and activate/deactivate the start/stop or regenerative functions. In order of boring to exciting, these modes are - Eco Pro, Comfort, Sport and Sport+.

Choose the more exciting Sport drive-mode setting and your right foot and the engine seem to become one; every quiver gets a response. The good thing is that these responses are quick but not jarringly so, meaning that you don’t spend any time headbanging if the person behind the wheel gets too excited. The engine revs to its 6500rpm limiter quickly without any indication of when the turbocharger kicks in. In that respect, this 4-cylinder engine is not too different from the 6-cylinder naturally-aspirated motor it replaces. The lack of a turbo kick also means you can take your favourite winding road without worrying about losing power around a sharp turn or dealing with a sudden power surge on the exit.

Slot into Sport+ mode and the car switches off the traction and stability control. There is a bump in the different sensations as you drive the car hard and fast, and you can feel the car moving around, with the rear axle wanting to go in a direction different from the front. Thankfully though, the fatter tyres at the back do a good job of keeping everything under control. Aggressive inputs through the steering may result in some slides, but you need to be pushing like an absolute lunatic to get the back to step out… or worse! The experience of driving the 330i hard will certainly leave a smile on your face.

There could a frown somewhere on that face too. This generation of BMW cars are the ones transitioning from being outright sporty cars to being more luxury oriented. As most first drafts go, there are some rather noticeable flaws. The electric steering lacks feedback, which in a rear wheel drive car is quite surprising. The softer suspension makes the 330i roll into corners and it floats over faster bumps - not the most conducive characteristic of a sporty car.

Also Read: Our expectations from BMW cars have been raised, check out our review of the BMW 520d Luxury Line

And finally, coming to the part about drama - or the lack of it. The BMW 330i is deceptively fast. A 0-100kmph time of 6.3 seconds sure is quick, but you wouldn’t know how fast it’s going till you look at the numbers. You don’t get thrown back into your seats, and neither is there that expected roar from the engine as it propels you to insane speeds.

Also Read: Want more drama? You may want to take a look at the new Skoda Octavia RS

The 330i should be a good daily driver then. Press the start-stop button and the engine greets you with a low, distant growl. Shift it into gear and let go of the brake - the 330i rolls off smoothly. The ride is surprisingly stiff at low speeds, though the ride gets progressively pliant as speeds increase. It’s never uncomfortable, but it certainly doesn’t compare to the luxurious ride of many of its competitors (and some cars which cost much less: for example, the Skoda Superb). There are some vibrations, and while they may not affect the driver as much, rear passengers will certainly notice them as there is nothing else in the cabin to keep them distracted. Blame the low profile tyres. The low profile 18-inchers at the back have little in the way of shock-absorbing rubber.

Also Read: Want a more practical version of the 3 Series without compromising on the petrol engine? Check out the BMW 330i GT M Sport!

The Eco Pro driving mode is designed to make the 330i as relaxed as possible and deliver higher fuel-efficiency figures. The throttle response is numb in comparison to other modes, the system uses regenerative energy recuperation as often as possible, the start/stop system kicks frequently in traffic and the air conditioning cools/heats less effectively. In our tests, the 330i returned 15.39kmpl on the highway and 12.5kmpl in the city; BMW claims a combined efficiency of 16.05kmpl. However, it’s the Comfort mode setting you want when driving in the city. It gives you the smooth throttle response of the Eco Pro mode, without getting penalised with a hotter than usual cabin.

The BMW 330i M Sport doesn’t scream sporty if you view it from the front or the rear. In fact, you’d be hard-pressed to tell that this is anything but a standard 3 Series, and the very generic white exterior colour on our test car did not help matters. The 3 Series looks different from the rest of the sedans in the BMW stable - it is after all the oldest car of the lot. That’s not to say that it looks bad, far from it. It’s ever-so-angry look from the front is actually refreshing in a sea of cars which look more neutral than Switzerland..

Move to the side and the very small M badge on the fender, black window highlights and the 18-inch M Sport alloy wheels are the only indications that this is something special. Delve into more details and you notice the different front and rear tyre sizes -, 225/45 at the front and 255/40 at the rear - another indication of the sportier credential of this 330i. BMW also offers a whole host of cosmetic accessories to spruce up this 3 Series into a real mean looker; everything from black double-spoke 18-inch wheels, carbon-fibre trim to a special racecar-like steering wheel with shift lights, and much more can be had... for a price.

In standard trim the rather slim M Sport steering wheel (with shapely paddle shifters behind it) and the large badge on the door sill continue to hint at the performance lineage that the 330i hopes to emulate. A heads-up display and a new gen BMW iDrive multimedia control system with a touch-sensitive trackpad and new smartphone-like tile display are the only new additions to the car on the inside.

Some features are also strikingly old now - you have to press the buttons on the key to lock/unlock the car, no sensors here. The front seats get extendable under-thigh support, but that’s only manually adjustable. There is no cruise control either; only a speed limiter! While the cabin may look fancy with premium brown leather covering most surfaces, you feel let down by the feature list on a car that costs Rs 45.20 lakh, ex-showroom. There’s also the fact to consider that BMW is set to debut the next generation 3 Series, with a healthy dose of tech borrowed from its larger siblings, in 2018.

The BMW 330i M Sport is certainly a sporty car, the engine is powerful and the transmission is quick. The car’s dimensions and dynamic setup make it feel compact and chuckable. To BMW fans though, that 4-cylinder engine will never feel as special as the six. For new BMW buyers however, the 330i M Sport frees them up from the hassle of buying the 330i Sport and kitting it up with M Sport parts. While it could have redeemed itself as a luxury car with a bit of added performance, being the oldest car in its segment has left it with less than ideal passenger space and some previous-gen features. The BMW 330i should have been special, but it just isn’t.