At the 2016 Auto Expo, Maruti Suzuki has taken the wraps off its new compact SUV – Vitara Brezza. We take a closer look at the car to tell you what to expect 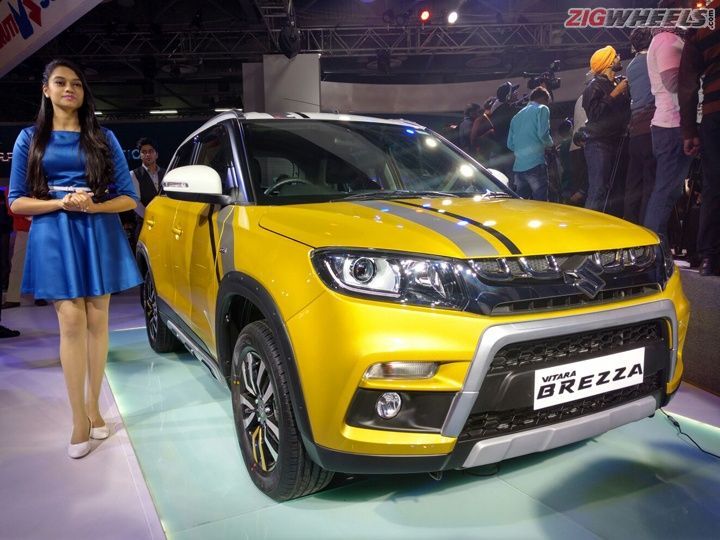 After a lot of speculation, numerous spy shots and some teaser images, Maruti Suzuki finally unveiled the Vitara Brezza yesterday. With this new offering, the Manesar-based car maker steps into the competitive compact SUV class of cars. The Vitara Brezza is possibly one of the most important cars for Maruti Suzuki this year. Although a bit late to join the sub-4 metre SUV party with Ford already reaping its sow and Mahindra recently joining the pack, Maruti is quite hopeful about the Vitara Brezza and rightly so.

The design of the car is one of the most important factors for buyers in this class. And in that context, Maruti Suzuki seems to have got it right. The long bonnet smoothly flows onto the bold chrome grille staying true to its new design philosophy. The pseudo scuff plates ensure that the compact-SUV gets that much needed rugged look. Headlights are projector kind and are expected to provide great visibility.

To ensure that the Vitara Brezza looks young, Maruti Suzuki has smartly given its exterior design a dual-tone approach. Depending on the exterior colour you choose, the car gets a contrasting coloured roof. This floating roof design along with the 10-spoke alloy wheels helps accentuate the rather simple looking profile. From the rear too, the Vitara Brezza looks as smart as its front. The large wraparound taillight, strip of chrome above the registration plate and the light crease above it, make the rear look attractive.

On the inside, the steering wheel and the instrument cluster are a straight lift from other Maruti Suzuki cars like the Baleno. All of this will help Maruti Suzuki keep the costs in check. The dashboard gets a dual-tone treatment and is made from good quality plastic. The seats looked comfortable and well bolstered. Rear seats too seemed wide enough to seat three adults fairly comfortably.

In terms of features, the Vitara Brezza will come heavily loaded. The top-end trim will come fitted with steering mounted controls, button start and keyless entry. The car gets the same touchscreen infotainment system that was introduced in the S-Cross. In fact, the Vitara Brezza will also come with the Apple Car Play feature. Needless to say a car in this class will come with the now standard Bluetooth, AUX and USB connectivity.

Maruti Suzuki will launch the Vitara Brezza with the DDiS 200 engine. This unit makes 90PS of power and 200Nm of torque from the Fiat sourced 1.3-litre diesel. This engine comes mated to a 5-speed manual transmission. Although Maruti Suzuki hasn’t announced anything as yet, they might even bring in the Vitara Brezza with the 1.6-litre diesel from the S-Cross.

Maruti Suzuki will launch the Vitara Brezza by mid-2016. When launched, it will compete against the likes of the Ford EcoSport and the Mahindra TUV300. Considering Maruti’s wide spread service network and reliability, expect the Vitara Brezza to bring in good number for the brand.