So futuristic, you could mistake it for a TRON car 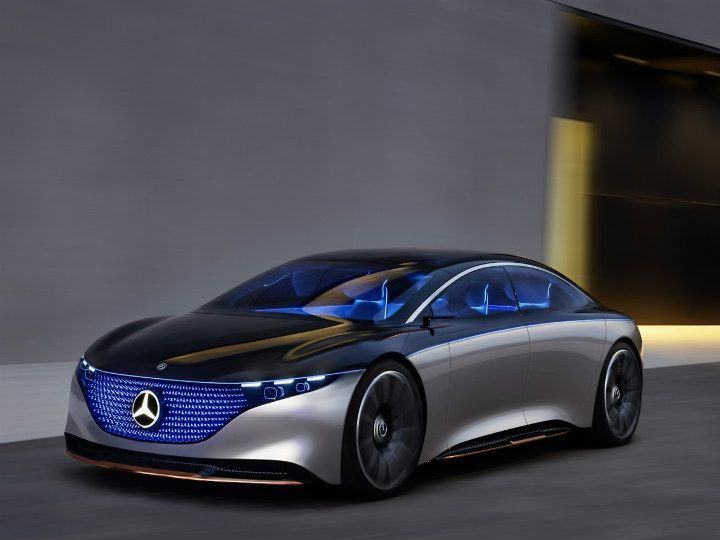 After a long period of teasers and spy shots, Mercedes-Benz has finally unleashed its next EV chapter with the reveal of the Vision EQS. In a nutshell, the new model is essentially Mercedes-Benz’s all-electric iteration of the S-Class. But that’s not all, as the new model features a whole host of futuristic bits.

One of the biggest talking points about the new Vision EQS concept is the exterior. It sports a body design so sleek that you could mistake the model as a one-piece body. It also gets a sleek 360-degree illuminated blue strip that separates the two-tone black finish. But the main talking point is the grille that consists of 188 individual LEDs at the black panel section, along with digital headlights that lends a 3D effect to the front area. The illuminated look continues at the rear with 229 LEDs around the bodywork shaped like miniature three-pointed stars.

The interior sports a concept car layout with a dashboard that blends into the front of the cabin. Mercedes has also equipped the Vision EQS with autonomous systems up to level 3. Other technical gizmos include a future iteration of Mercedes’ MBUX system in there, with digital screens dominating the front layout.

Under the hood, the concept is powered by electric motors at the front and rear, that produce 488PS of power and 760Nm of torque to propel the Vision EQS from 0-100kmph under 4.5 seconds. All the power catapults the concept car to a top speed exceeding 200kmph. It is also pretty efficient as the all-electric concept has an operating range of upto 700km according to the Worldwide Harmonised Light Vehicle Test Procedure. It also comes with a 350kw charging capacity that can recharge the batteries to 80 per cent in just 20 minutes.

In the end, Mercedes-Benz has certainly made a statement with the Vision EQS in design, tech as well as its capabilities as a driver-controlled electric vehicle. Only time will tell whether most of the tech in the concept car is carried forward to future models, but we can safely say that Mercedes-Benz is looking good for the future.