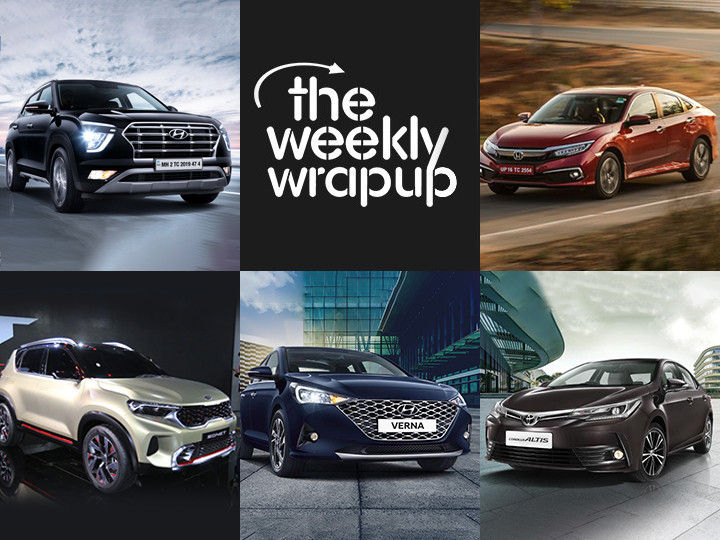 As you all know, the nation is under a lockdown following the COVID-19 scare for a period of 21 days. Nevertheless, last week saw some action from carmakers such as Toyota, Hyundai and Honda. Hyundai revealed the prices for the hotly-anticipated 2020 Verna while we found out that the caramker is working on a 7-seater version of the Creta. Honda pulled the plug on diesel variants of the Civic and CR-V in India but, on the flipside, teased the 2020 Jazz BS6. Meanwhile, Toyota has discontinued the Etios, Etios Liva, Etios Cross and Corolla Altis in India. We also got a glimpse of what the Kia Sonet’s cabin will look like.

Yes, the Honda City’s arch rival, the 2020 iteration of the Verna, is priced from Rs 9.30 lakh to Rs 15.00 lakh in India. You get to choose between five variants, three engines and four gearbox options! The powertrains on offer are a 1.5-litre diesel and petrol along with a 1.0-litre turbo petrol engine good enough for 120PS mated to a 7-speed DCT. All details this way.

7-Seater Hyundai Creta In The Works

Thanks to two spy shots, we now know that Hyundai is actually working on a 7-seater version of the 2020 Creta. No one saw this coming and from what appears, the SUV will also get a redesigned rear end while there are only subtle changes to the front. If it finds its way into India, the upcoming MG Hector Plus and Tata Gravitas has every reason to worry.

Kia’s third offering for India and ticket to the sub-4m space is the Sonet which will be based on the Hyundai Verna. Right now, a couple of spy images have revealed the Sonet’s cabin design which looks funky and feature loaded. A 10.25-inch touchscreen with the Seltos’ flat-bottom steering wheel is also visible. The SUV is expected to debut in India by August 2020.

First up, Honda has pulled the plug on the diesel variants of the Civic and CR-V in India. Both the models share the 1.6-litre diesel engine which might return in BS6 guise. On the bright side, Honda has teased the BS6 version of the Jazz, which will likely retain its existing set of powertrains.

Toyota will be discontinuing four cars from its lineup -- Etios, Etios Liva, Etios Cross and the Corolla Altis. All these cars are powered by the 1.4-litre diesel engine which will not be updated to comply with the BS6 emission norms.

With respect to the Reserve Bank of India’s decision, banks in India are giving an EMI Moratorium (temporary postponement of EMI payments) for car loans for 3 months due to the lockdown. Apart from that, Maruti Suzuki, Volkswagen and Tata have extended the last day for extended warranties for its customers. We also found out that the Detroit Auto Show has been cancelled for the year 2020. On a positive note, the UP state government will temporarily convert the Buddh International Circuit into a quarantine facility for  migrant workers.