It's been a journey spanning nine years for the Murcielago successor 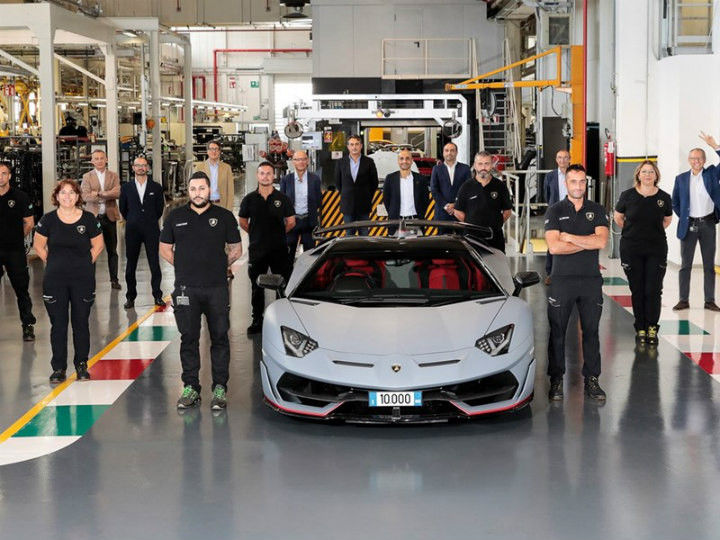 Automobili Lamborghini has achieved a landmark milestone, rolling out the 10,000th unit of the Aventador supercar from its Sant’Agata Bolognese factory in nine years since its debut. The 10,000th example is an Aventador SVJ Roadster, finished in Grigio Acheso (grey), destined for the Thai market.

Dubbed as the successor to the iconic Murcielago, the Aventador started out in 2011 with the  LP 700-4 in coupe form. One of its highlights was the innovative carbon-fibre shell that combined the cockpit, floor and roof of the car in a single structure. It was powered by an all-new  6.5-litre V12 engine that delivered 700PS of power. Paired with a 7-speed ISR AMT gearbox and all-wheel drive, it took 2.9 seconds to go from 0 to 100 kmph and topped out at 350 kmph.

Since then, the Roadster variant of the Aventador was introduced in November 2012, with an even more extreme open-top iteration, called the Aventador J unveiled earlier at the Geneva Motor Show. 2016 saw the last of the standard Aventador with a special edition Aventador Miura Homage made as a tribute to the Miura celebrating 50 years with similar colours and features to the original Miura. Only 50 of these units were made. It also received an spicer SV variant back in 2015 that bumped power upto 750PS, was lighter by 50kg and sported an extensive aero package.

Lamborghini then gave the Aventador an upgrade in the form of the Aventador S, which featured revised aerodynamics, new active suspension, and a boost of 40PS over its predecessor to push out 740PS of power. It also got a new EGO driving mode, which allowed the driver to choose from several additional configuration profiles that could be customised with the preferred criteria for traction, steering, and suspension within the range of the STRADA, SPORT and CORSA settings.

In 2018, Lamborghini went hardcore with the Aventador SVJ. A track-focused iteration of the Aventador S, its 6.5-litre V12 motor pushed out even more power at 770PS and 720Nm. Not only this, it got aero enhancements in the form of a new front bumper with integrated side fins and disconnected front splitter, a tri-dimensional air intake on the hood, a large carbon-fibre rear wing, and a prominent rear diffuser.

It also holds the fastest production car record at Germany’s famous Nürburgring-Nordschleife track, covering the 20.6km lap in just 6:44.97 minutes. Its production was limited to 900 units. Later in August 2019, a special edition Aventador SVJ 63 was introduced to celebrate the founding of Automobili Lamborghini in 1963. As the date suggests, only 63 units were produced. There was also the recently unveiled Xago edition, customised by the Ad Personam studio itself

While the Aventador continues to soldier on, Lamborghini looks to the future with the Sian FKP 37  hybrid supercar and the hardcore Essenza SCV12.