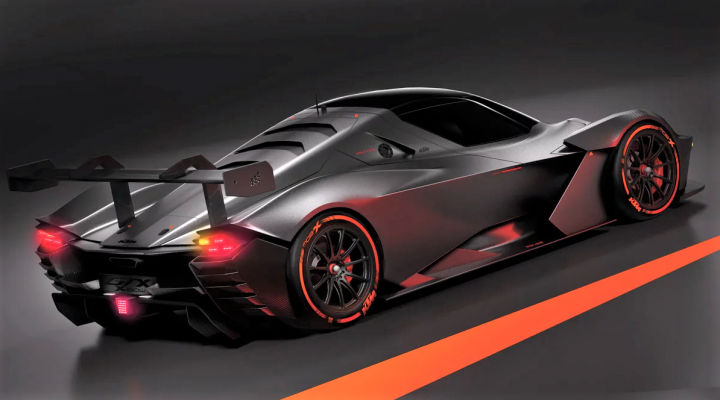 KTM thinks it should take a shot at the GT2 racing class. So, while everyone was glued to its manic orange bikes, the Austrians burned the midnight oil, did overtime, sacrificed some sleep, and came up with this, the X-BOW GTX racecar. Was it worth all that suffering? Well, we think it should do this more often.

The X-BOW GTX is a track-only racecar that will also participate in the GT2 class against Porsche 911 GT2 RS Clubsport and Audi R8 LMS GT2. These are the big shots in the motorsport fraternity and KTM needs potent numbers to go up against them. But, we reckon 600PS coupled with a kerb weight of 1000kg will turn the tables. The Austrians will offer two versions of the car - the GTX and GT2. The GTX will be the unrestricted model (subject to no regulations) for track day use.

An Audi-sourced 2.5-litre 5-cylinder turbocharged engine takes care of the propulsion while the custom chassis is made out of carbon composite. But do note that these are base figures and will be subject to changes once the GT2 regulations come into place this year. The new GT2 class will essentially plug the gap between the GT3 and GT4. In a nutshell, the cars will be similar to the GT3 ones, but with more power and less aero.

Standard X-BOW that debuted in 2008

With the numbers out of the way, we can shift our focus to just how good the X-BOW GTX looks. Now, this is one race car that looks absolutely stunning and purposeful. Every line and design element you see here has an objective and is aesthetically pleasing at the same time. Most of it is down to the short proportions and sharp design language, which does not go over the top. Oh and that swan neck spoiler, similar to the one we’ve seen in the McLaren Senna, looks at home in the X-Bow GTX.

KTM has released only two images of the X-Bow GTX. In fact, we are yet to see its face. But our gut feeling says it's got a striking face if not a pretty one. The X-BOW GTX is yet to receive final homologation. Once that happens, it might also be eligible for other GT2 racing series such as the Nürburgring Langstrecken Serie (formerly known as VLN). KTM is also contemplating a one-make series with the X-Bow GTX in 2021.

The X-BOW GTX is likely to debut in GT2 later this year. We should find out the price and detailed specifications around that time. Meanwhile, KTM has said “the first 20 cars will be available this year.” By the way, KTM, can we please have a road-legal version of this?