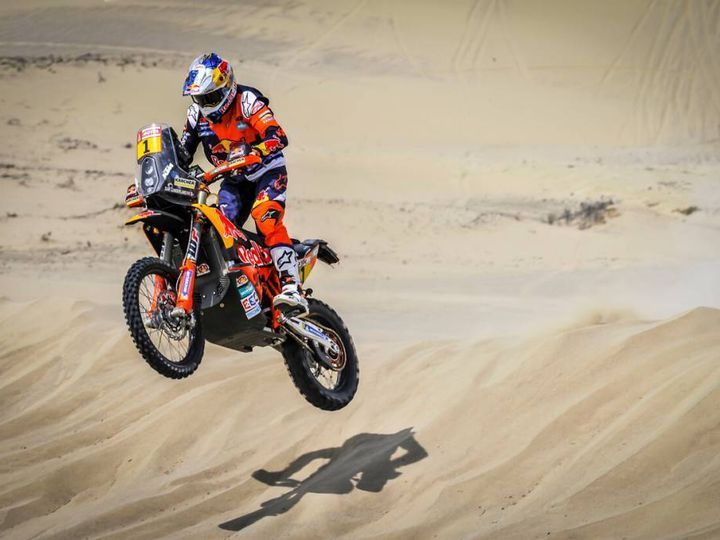 The opening stages of the Dakar 2018 saw competitors head out of the Peruvian capital of Lima. The first few days will take competitors through dunes. This terrain is physically demanding and also demands the riders to be extra sharp in terms of navigation as there lesser obvious landmarks to rely upon.

Sadly the opening stage dealt a blow to Indian team Hero, as Portuguese rider Joaquim Rodrigues had to be flown out of the stage by helicopter after a power launch over the high dunes resulted in a nasty crash. Rodrigues’ Hero teammate C S Santosh completed the first stage in the 13th position. This is the best Dakar finish registered by Santosh in his four-year Dakar run. Oriol Mena, the third Hero rider, started off cautiously before finishing the first stage in 22nd position.

In the second stage, Sherco TVS faced some drama as Joan Pedrero had a breakdown just before the refuelling point. Having to push the bike in sand cost him over ten minutes. Aravind KP did well to sail through the stage at a safe and steady pace. Unfortunately, TVS' rider Adrien Metge was met with an accident, forcing him out of Dakar this year. Now, just like Hero MotoSport Rally Team, Sherco TVS are too left with just two riders.

Hero MotoSport Team Rally’s CS Santosh felt that despite having ridden over dunes in the past the terrain had its own uniqueness. “The sand was really soft and some of the dunes were really massive”, he said. His teammate Oriol Mena now shouldered the additional weight of the responsibility for team Hero well, finishing 27th at the end of Stage 2.

Injured rider Joaquim Rodrigues has confirmed that he is okay and has set his hopes towards the 2019 Dakar, “Thanks to all the friends and my team for the support and wishes. I am doing ok now and will be flying back home soon to complete my recovery. Sorry, my Dakar was short this year, hard luck but I will come back stronger. All the best to CS and Mena to make it to the finish line at Cordoba safely”