Will be offered in three body styles for the first time 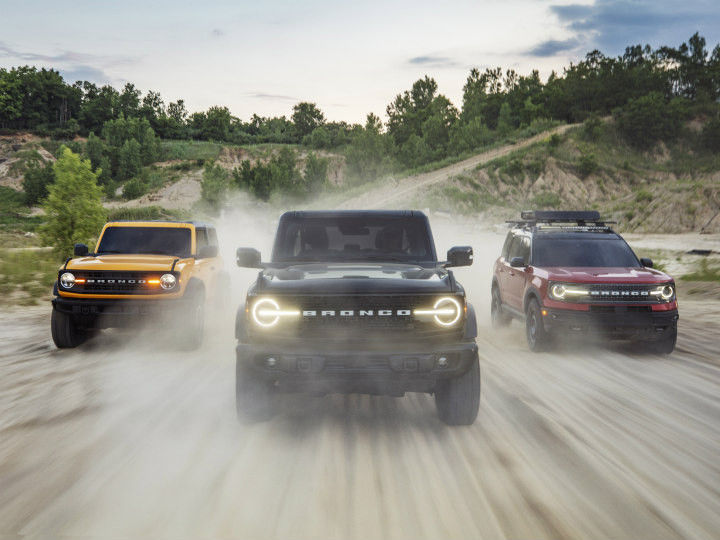 After what seems like an eternity of teasers and spy shots, Ford has officially revived the Bronco after nearly 25 years with the 6th iteration of the iconic SUV.  Aside from the two-door body style, it is also available in the four-door body style for the first time. The third option is a more SUV-like variant called the Bronco Sport.

While all three Broncos feature distinct body styles, there are some common elements like the boxy stance, Bronco lettering on the front and rear as well as a round headlight design that pays homage to the first generation Bronco. But it gets a modern tweak in the form of an LED ring setup. The two-door and four-door variants can go even extreme with bits like a removable roof, frameless door panels as well as bash plates and shields for the engine, transmission transfer case and fuel tank.

Despite their rugged nature on the outside, the Bronco models don’t shy away from creature comforts on the inside. The Bronco Sport gets an 8-inch touchscreen infotainment system with SYNC3 and compatibility with Apple CarPlay and Android Auto. Its two siblings receive bigger 12-inch units with SYNC4 interface, over-the-air updates, FordPass Performance app and a 360-degree camera. Here are ten cool features that make the Ford Bronco desirable.

The Bronco Sport on the other hand is powered by 1.5-litre and 2.0-litre EcoBoost engine options. The smaller mill produces 181PS/258Nm, whereas the 2.0-litre engine makes 245PS of power and 373Nm of torque. Both engines are paired to an 8-speed automatic transmission.

The main talking point of the new Bronco family is of course its off-road prowess. All three models get drive modes codenamed GOAT (Goes Over Any Terrain). While the Bronco Sport gets five modes--- Normal, Eco, Sport, Slippery, and Sand -- its bigger siblings get Mud/Ruts and Rock Crawl modes to play with as well. There are two 4x4 systems to choose from. The first choice is a a two-speed electronic shift-on-the-fly transfer case. The other option is a more advanced two-speed electromechanical transfer case with auto mode. The Bronco Sport is limited to the standard 4x4 setup.

There’s no word yet on whether the Bronco will ever make it to India. But it could be offered like the Ford Mustang as a halo product imported from the USA. If it does make it to India, potential rivals include the Jeep Wrangler and the Land Rover Defender. The Bronco Sport is unlikely to make it to the country.