The GLB is Merc’s answer to the upcoming Audi Q4, BMW X2 and Volvo XC40 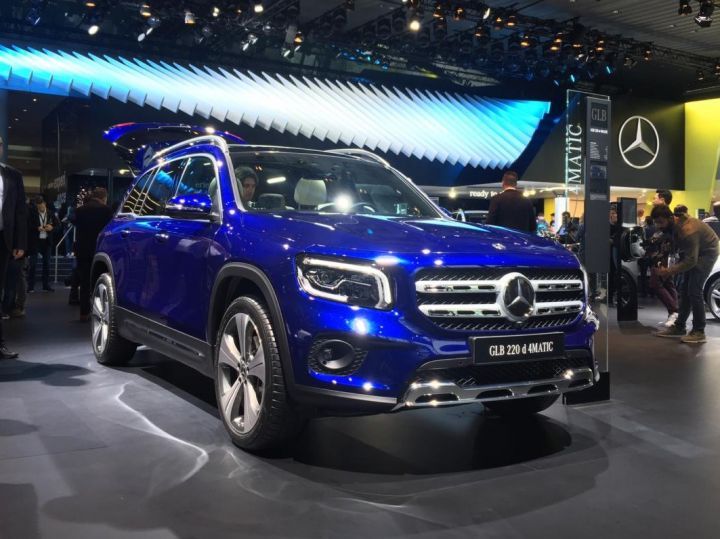 First showcased at Auto Shanghai 2019, the Mercedes-Benz GLB concept set itself apart from the competition with its compact proportions paired with proper SUV-ish, butch looks. In a sea of crossover-ish competitors, the GLB took a different approach to design and also managed to accommodate seven seats without being too large. And now, Mercedes-Benz has officially unveiled the new production-spec GLB, which will slot in between the GLA and the GLC.

The GLB is based on the MFA2 (Modular Front Architecture) platform, which also underpins the A-class and other front-wheel-drive Mercedes. While it may be based on a compact platform, the GLB is a fairly sizeable SUV with seven seats and a significantly large 2829mm wheelbase.  Here’s a comparison with the Volvo XC40 for some perspective:

Looking at the size comparison, it is obvious that the GLB trumps the XC40 in all aspects except width. The GLB is substantially longer than the XC40, which should translate to more space on the inside.

The SUV follows a different design approach in comparison to what we have seen in the GLA and GLC. The coupe-like stance and sweeping roof have made way for a boxier overall design. In fact, it now looks more like its eldest sibling, the GLS. The production-ready GLB stays true to the concept with most of the elements being retained in the final design, except for the off-road additions and large wheels.

The boxy front is dominated by an imposing grille with the three-pointed star sitting in the centre. The multi-beam LED headlamps get an ‘eyebrow’ DRL and a lower DRL element too. The lower part of the bumper houses a traditional set of fog lamps with an air dam in between.

In profile too, especially because of the squared wheel arches, the GLB looks equally butch. The window line features a unique kink, which may or may not appeal to everyone. The rear section also follows a boxy design language with split LED taillamps and an aluminium diffuser.

Powering the GLB 250 is the M 260 2.0-litre turbocharged four-cylinder petrol motor, previously seen on the A-class, which churns out 224PS and 350Nm of torque. The SUV can sprint from 0-100kmph in 6.9 seconds with power being sent to all four wheels via an 8-speed DCT. Standard variants without the 4MATIC all-wheel drive system send power to the front wheels only. There is also the GLB 200 variant, powered by a 1.3-litre, four-cylinder petrol engine developing 163PS/250Nm paired to a 7-speed DCT. As for the diesel variants, the GLB 200D and 220D use the same 2.0-litre diesel in two states of tune - 150PS/320Nm and 190PS/400Nm. The 4MATIC versions come with various drive modes which include the Eco/Comfort with 80:20 distribution, Sport with 70:30 and off-road mode with a balanced 50:50 distribution.

The interiors of the SUV follow the same design language as other Mercs with round AC vents and a 7.0-inch instrument cluster along with a 7.0-inch touchscreen infotainment display. Mercedes-Benz User Experience (MBUX) interface with voice control and various other features comes as standard too. Other optional features include parking assist, Burmester surround sound system, head-up display and others. As for the third row of seats, Mercedes is claiming that these can seat two medium-sized adults comfortably. Mercedes also says that it has made ingress into the third row easier with the EasyEntry system, which folds the second-row seats forward at the pull of a lever.

The world premiere of the GLB SUV is scheduled for this month in Utah with sales set to begin in the US by the end of the year. Expect the GLB to be priced at around Rs 45 lakh (ex-showroom) when it comes to India. The BMW X2, Volvo XC40, and the upcoming Audi Q4, all rival the GLB, but it certainly has an edge with the segment-first third-row seats.