Be it for a daily commute or a weekend spin, almost everyone loves to ride an executive bike. It thus came with little surprise when half-a-dozen such machines were unfurled in the Indian market over the course of the past year or so. From a 150cc cruiser to a 200cc adventure powerhouse, there are some tough contenders fighting it out for the crown in this segment. Here are the nominees: 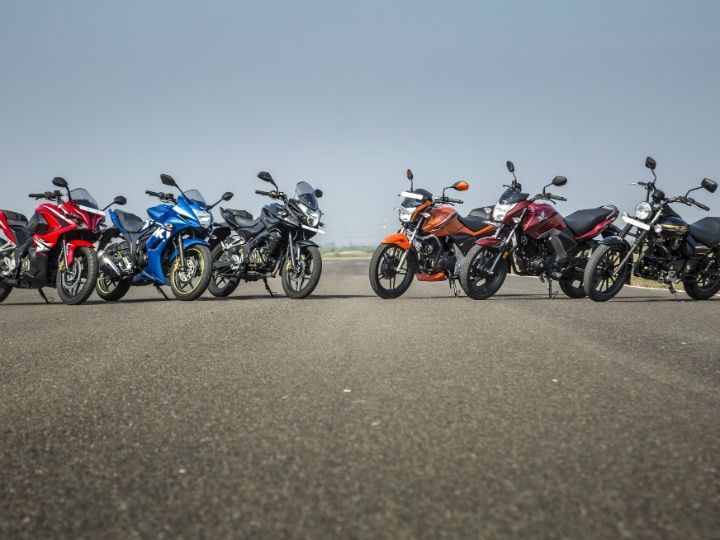 Hero can be credited as the founder for the 150cc market when it launched the CBZ in the late 1990’s. Cut to the recent times, and things had fallen terribly miserable for the Indian manufacturer with the Hero Xtreme. With an aim to turn the tide, Hero thus came up with the Xtreme Sports – it’s most powerful bike in this segment with a 149.2cc, air-cooled single cylinder engine pumps out 15.7PS at 8,500rpm and 13.5Nm at 7,000rpm. Pretty competitively, the new Hero Xtreme Sports was launched at Rs 72,625 and Rs 75,725 for standard and double disc brake variant respectively (ex-showroom Delhi).

A successor to the old Unicorn, the all-new one came with fresh design sporting edgy lines. The large trapezoidal headlight flanked by the small black windscreen gives the front a bold stance. Aside from the difference in the looks department from its older sibling, the CB Unicorn 160 sports a new heart too. The 163.7cc unit makes 14.7PS and 14.6Nm and the new bike is around 10 kg lighter than the outgoing Unicorn. The base variant of the CB Unicorn 160 with front disc brakes was priced at Rs 69,350 (ex-showroom Delhi).

With the unveiling of the new Pulsar AS150, the Chakan based two-wheeler giant hinted at kick-starting a new sub-segment of adventure motorcycles in the 150cc segment. Powering the Bajaj Pulsar AS150 is an all new 150cc motor that took almost two years of development time. The single-cylinder, air-cooled DTS-i motor engine gets equipped with 4-valves. The Pulsar AS150’s mill pushes out 17PS at 9,500rpm and 13Nm of peak torque at 7,000rpm making it the most powerful air-cooled 150cc motorcycle on sale in our country. The bike has been priced at Rs 79,000 (ex-showroom Delhi) which makes it phenomenal value for money given the features it has on offer.

Bajaj came up with another Pulsar - the RS200 in the year 2015, and it claims to be the fastest Pulsar yet. The RS is based on the 200NS. So, it uses the same perimeter frame, the same suspension front and rear, and the same wheels and tyre specifications. As mentioned earlier, the engine on this one is also the same as the Bajaj Pulsar 200NS that makes 23.5PS and 18.3Nm. The engine comes mated to a 6-speed transmission. This pricing of Rs 1.3 lakh (ex-showroom Delhi) for the ABS version also makes the RS200 the most expensive Pulsar yet.

Bajaj was on a roll in this segment; and after the new Pulsars, it created another entirely new 150cc cruiser bike segment in the Indian market by launching the Avenger Street 150. The Avenger 150 Street gets the same design and matte finish as its elder siblings, the Avenger 220 Street and Cruise. In fact, from a distance it is difficult to differentiate the 150 Street from the 220 Street thanks to their identical alloys and matte finish. This 150cc mill has been around for a really long time, and Bajaj has been working on it consistently, each time it has updated a model using the engine. Power output is on-par with most 150cc motorcycles in the market at 14.5PS, while peak torque produced is 12.5Nm. at Rs 75,000 ex-showroom New Delhi, the pricing is another plus on the Avenger Street 150 which is set to take the markets by storm, if not already.

As we had summed it up in our review, the new Suzuki Gixxer SF with its sporty full-fairing, peppy engine, rich ride and dynamics seems to be been designed for soaring success in India. The design is a completely love-at-first-sight one, which is then followed by a welcoming riding posture. Being a variant of the Gixxer, the new Suzuki Gixxer SF continues to be powered by the 155cc single cylinder, SOHC, air-cooled and carburetted engine that also powers its naked sibling. The motor is light and fairly spirited producing 14.8PS of peak power at 8,000rpm and 14Nm of maximum torque at 6,000rpm. At at Rs 96,300 (Metallic Triton Blue on road Pune), the price is slightly on the higher side, but even that hasn’t dented the Gixxer SF’s popularity in the market!