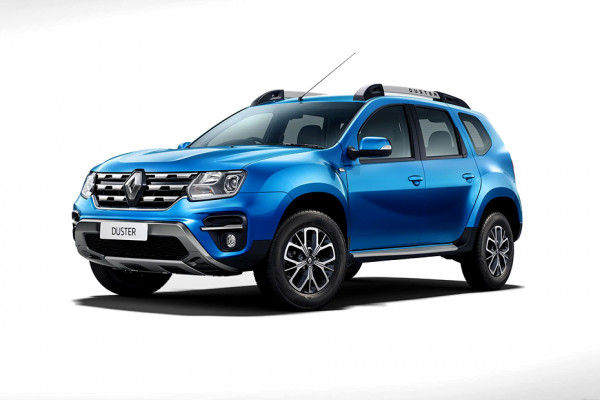 Renault Duster is a 5 seater SUV car launched at a base price of Rs. 8.49 lakh in July 2019 by Renault in India. Duster is available in petrol engine only . Duster petrol is powered by 1498cc engine. It is available in 3 variants and 7 colours.

Renault India has silently launched the BS6-compliant Duster facelift in India at a starting price of Rs 8.49 lakh (ex-showroom Delhi). Only the 1.5-litre petrol engine has been updated with the 1.5-litre diesel being discontinued ahead of the April 1, 2020, BS6 deadline. In addition, the variants have been rejigged with a new top-end RXZ variant for the petrol only Duster priced at Rs 9.99 lakh (ex-showroom India). The Duster no longer has all-wheel drive or a CVT option. The base RXE variant is now around Rs 50,000 more expensive while the RXS variant is up to Rs 10,000 more expensive than its BS4 counterpart.

The facelifted SUV comes with a host of cosmetic changes along with various other additions. The new Duster is also available in two new shades: Caspian Blue and Mahogany Brown. Inside, it gets updates like a new infotainment system with Apple CarPlay and Android Auto support along with a new steering wheel.

You can choose between a 1.5-litre petrol or a 1.5-litre diesel engine. The diesel motor gets two states of tune - 85PS/200Nm and 110PS/245Nm, whereas the petrol makes 106PS and 142Nm. You can choose between a 5-speed manual or a CVT with the petrol motor, and a 6-speed manual or a 6-speed AMT with the more powerful diesel. Our pick would be the punchy 110PS diesel that seems at home on the open highways. Of course, it’s the only crossover in this price bracket to feature all-wheel drive. So, if getting dirty is your thing, the Duster is your only option for now.

If you like your SUVs tough, muscular and rugged, the Duster should appeal to you a whole lot.The facelift brings with it new projector headlamps, LED DRLs, new front grill and chrome accents. The bonnet has a new, twin bump design and there are new alloy wheels as well.

The interiors have received a much needed sprucing up with a new steering wheel, new upholstery and an updated 7.0-inch touchscreen infotainment system. It now features the Android Auto or Apple CarPlay, automatic climate control and cruise control and an Arkamys tuned sound system. Space on offer is par for the course. The high-seating position and comfy seats make the Duster a fantastic road-tripper. The 475-litre boot is among the most cavernous in its class and can pack in a treadmill if you fold the rear seats down. Trust us, we tried.

Maruti Suzuki S-Cross: Maruti's premium crossover suffers from the fact that it does not look like an SUV. It is a premium offering with a good amount of standard equipment, good space for five people and their luggage.

Renault Captur : The Captur brings some style to a segment of boxy SUVs. If you want to stand out in the crowd or while munching highway miles, the big Renault is worth a dekko!

Nissan Terrano : The Duster's better-looking cousin (for some), the Terrano suffers from being too overpriced for its own good. It does get a diesel AMT variant which is a good option for those looking for a convenient urban SUV.

Hyundai Creta: There’s not much wrong with the Creta. It’s spacious, is built well inside out and drives well too. It’s got an appeal very few of its competitors can match.

Ford EcoSport: The EcoSport is back with a vengeance. It looks like a small SUV (and not a big hatch), packs in a healthy amount of kit right from the base variant and has potent motors under the hood. And it’s got tons of swag too. Deal?

Renault Duster Turbo petrol comes with a 1.3-litre engine. It develops 156PS and 250Nm of torque! Comes mated to a CVT gearbox. Renault India has unveiled the Duster Turbo petrol at Auto Expo 2020. It comes with a new 1.3-litre turbo-petrol engine that develops 156PS of power and 256Nm of torque. It’s also one of the first turbo-petrol cars to come with a CVT. Apart from that, the Duster Turbo comes with slight cosmetic revisions to differentiate it from the standard model. For more information on it, watch our detailed walk around review. More on Auto Expo 2020: https://www.zigwheels.com/autoexpo For more details and video reviews of the latest cars/bikes, do subscribe to ZigWheels: https://bit.ly/2T1LJD2 #RenaultDusterTurbo #RenaultDuster #AutoExpo2020