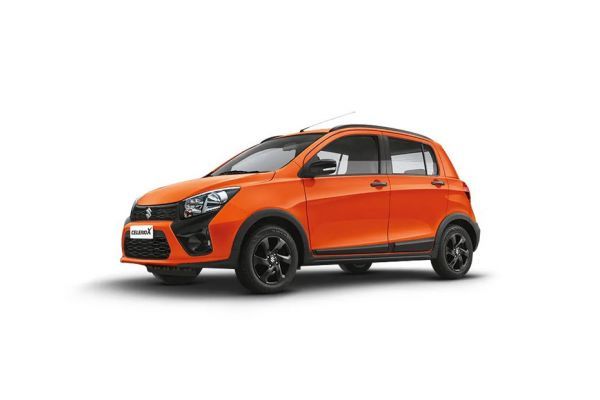 Maruti Suzuki has launched the BS6-compliant CelerioX with prices starting from Rs 4.90 lakh. Prices for the BS6-compliant model have been increased by Rs 15,000. The CelerioX is available in four variants: VXI, VXI (O), ZXI and ZXI (O). The Celerio continues to utilise Maruti’s 1.0-litre petrol engine with mechanical upgrades to meet BS6 emission standards. It develops 68PS of power and 90Nm of torque, figures similar to the BS4 version. The CelerioX is offered with a 5-speed manual transmission and AMT. The CelerioX is essentially a rugged version of the standard Celerio. While it doesn’t have any direct rivals, the CelerioX locks horns with the Hyundai Santro in terms of pricing.

No changes here. It is powered by a 1.0-litre, 3-cylinder petrol engine that puts out a modest 68PS of power and 90Nm of torque. The same engine can be had with either a 5-speed manual transmission or a 5-speed Auto Gear Shift unit, which is popularly known as automated manual transmission (AMT). Unfortunately, the CelerioX isn’t available with the CNG kit. As far as the mileage figure is concerned, Maruti Suzuki hasn’t revealed it yet. Nevertheless, it shouldn’t be too far away from the 23.1kmpl clocked for the standard Celerio.

There are eight variants in total if you consider the optional safety pack and the AMT. Give or take, each variant of the CelerioX costs approximately Rs 8000 more than the corresponding variant from the standard lot. All the (O) variants get basic safety gadgets. That means dual airbags, front seat belts with pretensioners and load limiters and ABS as standard. If want the funky black alloy wheels, only the ZXI (O) MT will fulfill that need. The rest of the lot gets black-coloured full wheel covers.

The X-factor is certainly there. From just about every angle on the outside, the CelerioX is shouty. At the front, the dual-tone bumper, where the fog lamp housings sit within the glossy black section, and the absence of chrome lining on the grille make it stand out. On the sides, the ORVMs, door handles, door beading, 14-inch alloy wheels and the roof rails are all black in colour as well. There’s also heavy use of plastic cladding all around the car, including the wheel arches. The rear bumper flaunts a dual-tone treatment too but also has a faux skid plate to further liven up the exteriors. All in all, the CelerioX will click with someone who is on a tight budget but wants a car with a sporty and rugged dress on the outside.

The ‘sporty’ treatment continues on the inside as well. The all-black interior is accentuated with white-colour accents. The beige seat covers found in the standard Celerio have been ditched for black ones, which come with their own orange-coloured accents. On the features front, driver’s side airbag and seat belt reminder as standard. However, the safety tech can be upped in the recipe as the passenger side airbag and ABS are offered as optional extras in variants where they aren’t part of the standard kit. Nothing else has changed and that means you still get the flimsy but functional ergonomics inside.

Toyota Etios Cross: The Etios Cross is essentially a rugged version of the Etios Liva. Hence, it will be as dependable as ever and probably the roomiest amongst its direct competition. What’s more, with the Etios Cross, onlookers won’t look for a yellow number plate.

Tata Tiago : The Tiago has all the right ingredients to make it an enticing prospect. It is competitively priced, has loads of kit and is certainly one of the peppiest city cars around. Compared to the competition, quality and reliability issues are still prevalent but aren’t as substandard as they used to be a few years ago.

Maruti WagonR: Maruti’s tallboy is as practical as little hatches get. While it doesn’t have a diesel engine to offer, the petrol engine is known to be peppy, refined and economical. The WagonR too offers the convenience of an AMT paired with its petrol engine.

Nissan Micra Active: Among the most successful models globally, the Micra brings a polished recipe to India. Compact proportions, zippy engines and just about enough creature comforts to not let you whine. It is beginning to show its age, though.

The mileage of Maruti Celerio X is 21.63 kmpl. This is the claimed ARAI mileage for all the variants of Celerio X.
View User Reported Mileage

What is the price of Maruti Celerio X Top Variant?

The ex-showroom price of top variant of Maruti Celerio X is 5.67 Lakh (Delhi).

What is the mileage of Maruti Celerio X?

What is the EMI of Maruti Celerio X in Delhi?

What are the top competitors of Maruti Celerio X?

What is the boot space in Maruti Celerio X?

What is the ground clearance of Maruti Celerio X?

The ground clearance of Maruti Celerio X is 165mm.

What are the best financing options for Maruti Celerio X?