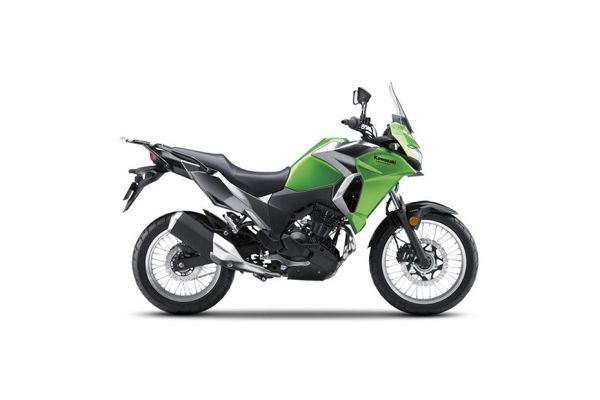 4.4
(6 reviews)
Rate this bike
Alert me when launched Ask A Question

The 2020 Versys X-300 is available in a new white paint scheme. It’s expected to be launched in India next year.

The 296cc liquid-cooled, parallel-twin motor makes 40PS at 11,500rpm. Torque is 25.7Nm at 10,000rpm. It gets a larger airbox and revised intake that gives the motor a stronger mid-range. A larger rear sprocket gives the Versys-X 300 better initial acceleration. The engine is mated to a six-speed gearbox. The front telescopic suspension gets 130mm travel and the rear gas-charged, preload adjustable monoshock has 148mm of travel. The Versys-X 300 gets dual-channel ABS assisted 290mm petal disc up front and a 220mm petal disc brake at the rear.

The Versys-X 300 is an entry-level adventure tourer, with the engine derived from the Kawasaki Ninja 300. In the flesh, the Versys-X 300 looks larger and more intimidating, owing to its adventure ready proportions. The front gets a nearly vertical windscreen, knuckle guards and two LED fog lamps mounted on a large crash bar that wraps around the front of the bike. Interestingly, the Versys-X 300 is 5mm longer and 100mm wider than the Versys 650! Features include a set of LED auxiliary lights, front crash guard, knuckle guards, a single hard pannier and rear luggage rack. The 815mm tall seat is narrow so it is easy to place both feet on the ground. Parts quality and fit/finish are top-notch and the bike feels built to last. The semi-digital instrument cluster feels a bit basic and dated.

Royal Enfield Himalayan : The Himalayan is the most affordable ADV you can buy in India. Built from the ground up it features a tubular frame with long travel suspension and styling that can be termed functional. The all-new 410cc air and oil cooled fuel-injected single cylinder motor is a torquey unit which serves well for off-road excursions. The Himalayan is not exactly known for its reliability and refinement but makes sense if you love occasional off the trail adventures.

BMW G 310 GS: The G 310 GS brings with decent off-road ability as the equipment on offer doesn't make it a hardcore adventure. Instead, it comes across as a more potent tourer with some trailing capabilities. Priced at Rs 3.49 lakh, its the most affordable BMW adventure tourer you can buy. But it's also the most expensive single-cylinder 300cc adventure bike on offer in India. If you are purely looking for a badge value and don't intend to do heavy off-roading, it makes for a good package. But the pricing is still a bit hard to digest.

For a 300cc ADV the Versys X is an expensive proposition, but is it worth its high asking price?

Kawasaki Versys X 300 is going to launch in India with an estimated price of Rs. 4.69 Lakh

What is the expected price of Kawasaki Versys X 300?

What is the launch date of Kawasaki Versys X 300?

What are the top competitors of Kawasaki Versys X 300?