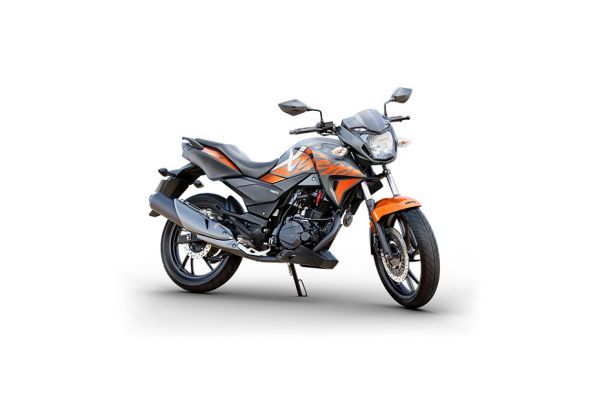 On the spec front the 200R gets an all-new, 199.6cc, air-cooled, single-cylinder engine developed in-house at the Hero’s plant in Jaipur. It makes 18.4PS of power at 8000rpm and 17.1Nm of torque at 6500rpm and is is mated to a 5-speed gearbox. Hero says the engine is designed to deliver more low-end torque and claims a 0-60kmph time in 4.6 seconds and 114kph top speed. Claimed fuel efficiency is 39.9kmpl. The frame is a diamond-type chassis with a 7mm longer rear swingarm. Suspension components include a 37mm telescopic front fork and an adjustable monoshock unit at the rear. Braking is via 276mm front and 220mm rear disc brakes, with a standard single-channel ABS.

In terms of design, the Hero Xtreme 200R is very similar to its younger sibling, the Xtreme Sports; however, it is sharper and sportier looking. Still, the two-tone colour combination and graphics are a bit too dramatic and seem to be overdone. The tail section is much cleaner though the split-seat option makes way for a more conventional single seat. Features include LED DRLs and LED tail-lamps. Highlights are a single channel ABS, a first for Hero. The semi-digital instrument cluster offers basic information such as the speedometer, odometer, fuel-range, a clock and a service indicator.

Bajaj Pulsar NS 200: Taking note of the success achieved by the Apache RTR 200, Bajaj relaunched the NS 200 in India in 2017. The Pulsar NS 200 offers great value for money and performance for its asking price. Muscular looks with new graphics endow the bike with design flair, while engine refinement and build quality has scope for improvement.

Yamaha FZ25: The Yamaha FZ25 is a good option for someone looking at a daily runner that can double up as an able tourer on the occasional highway jaunts. Yamaha’s legendary reliability, good performance from the motor and stylish design make it a great package. Yes, it does command a premium over the TVS Apache RTR 200, but it is well worth the extra moolah.

TVS Apache RTR 200: The TVS RTR 200 is a very capable motorcycle. When compared to the NS 200, the Apache RTR 200 not only is more commuter-friendly but also more economical to run in the city. It is a good option for someone looking for a fun-packed motorcycle with good low-end torque and a dash of performance.

Hero is pitching the new Xtreme 200R at the practical end of the 200cc category. But is that a good enough proposition in this segment?