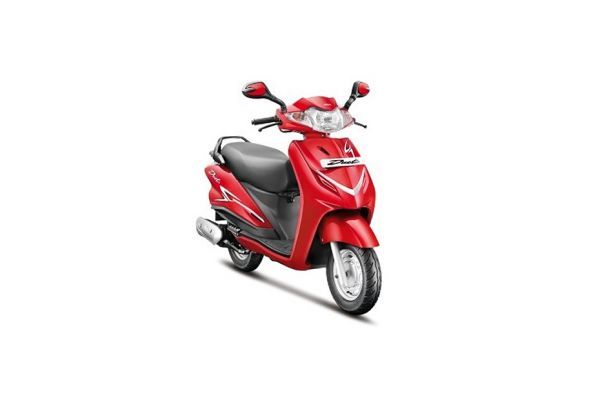 Hero Duet is a scooter launched at a base price of Rs. 48,280 in October 2015 by Hero Moto Corp in India. Duet is powered by 300cc and 110cc engine claiming mileage of 65kmpl. Duet has a liquid cooled, 4- stroke, 4 -valve, dohc engine and a 6 speed gear box with automatic transmission. Hero Duet comes with disc breaks in front and rear with a support of ABS. Hero Duet has wheel size of 254 mm. It is available in 3 variants and 5 colours.

Hero MotoCorp also announced that the new GST tax has reduced prices for its two-wheelers ranging from Rs 400 to Rs 1,800 for its mass market two-wheelers depending on the state of purchase and model. Hero MotoCorp Ltd expanded its scooter portfolio and launched the new Duet scooter in India. Hero had showcased the new Duet. The Hero Duet is based on a new platform and comes with full metal body. The Hero Duet will be the second scooter to employ a non-Honda engine and will be powered by a indigenously developed 110-cc air-cooled, 4-stroke single cylinder OHC engine, producing a maximum power output of 8.5PS at 8,000 rpm and maximum torque of 8.3 Nm torque at 6,500 rpm.

The Duet is powered by the same engine that powers the Maestro Edge, which is a 110cc, air-cooled, four-stroke, single-cylinder powerplant producing 8.4PS of maximum power at 8000rpm, while peak torque of 8.3Nm is delivered at 6500rpm. Bumps and potholes are handled by telescopic forks at the front, whereas a hydraulic shock takes care of the rear. The 130mm drum brakes on both the tyres come with Integrated Braking System. The Duet also gets an external fuel cap and features an under seat bulb along with a USB 3.0 port for charging.

The all-metal body adds a premium feel to the scooter, putting the Duet in a class of one in its segment. Hints of chrome on the front and sides further accentuate its appeal. The Hero Duet gets an analog instrument cluster with a digital odometer. There is also a pass switch on offer. There is a segment-first indicator for side-stand and a service reminder beam on the console.

Honda Activa-i: The Activa-i primarily focuses on women. It’s got a peppy engine and comes with Honda’s quintessential Honda reliability. But the trailing link suspension up front doesn’t help much with soaking bumps as well as the Duet.

Suzuki Let’s: It is styled right and has one of the peppiest engines in the segment. It’s easy to ride in the city and is also the lightest. But the high floorboard limits it from being accessible for taller riders.

TVS Wego: The Wego too has its high points like class-leading features along with a more modern aura. However, it doesn’t feel as peppy as its rivals, although it handles well. It is available in two variants: one with drum brakes accompanied by sync brake system, and the other with an optional front disc brake variant.

Yamaha Ray-Z: The Yamaha Ray-Z is a striking scooter with an eager powerplant. It is comfortable to ride, even for taller riders, thanks to the lower floorboard, and also gets lively handling dynamics. There is a disc brake variant on offer as well.

On the back of handling and the features on offer, the Hero Duet ticks several right boxes despite an understated design language. So if you are looking for a unisex scooter that happens to be not so appealing on the design front, the Hero Duet is a good option to shortlist.