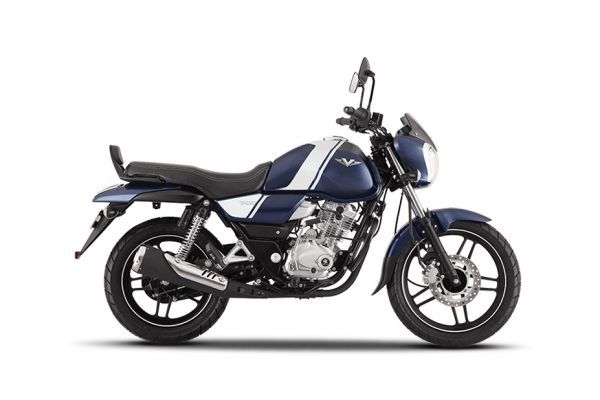 Bajaj V15 is a commuter bike launched at a base price of Rs. 66,739 in December 2018 by Bajaj in India. V15 is powered by 149cc engine claiming mileage of 57kmpl. V15 has a single cylinder, 4 stroke, sohc 2 valve, air-cooled, dts-i engine and a 5 speed gear box. Bajaj V15 comes with front disc break and rear drum break. It is available in 4 colours.

Bajaj will soon be launching the V15 Power Up. This new model makes 13PS and 13Nm of torque which is 1PS and 0.3Nm more than the current V15. While mechanically the rest of the bike remains unchanged, it gets new and larger graphics. The Bajaj V15 has been positioned as a 150cc commuter offering and the fuel tank has been crafted using metal from INS Vikrant, the country's first aircraft carrier.
It has a 149cc air cooled motor that makes 12PS and 12.7Nm of torque. The bike comes with a dual cradle frame and has 33mm front forks and dual rear gas charged shock absorbers. It gets 18-inch front and 16-inch rear alloy wheels fitted with tubeless tyres. Braking is via a 240mm front disc and 130mm rear drum. We expect Bajaj to launch the V15 with a single channel ABS soon.
The V15 will compete with the Honda Unicorn 150 and Hero Achiever 150.

Top Competitors of V15 Power Up

Must Read Questions & Answers Before Buying V15 Power Up

All V15 Power Up Images

The Bajaj V15 is powered by a 149.5cc, air-cooled, single-cylinder motor that delivers 12PS @ 7500rpm and 12.7Nm @ 5500rpm. The new motor complies with BSIV emission norms and is mated to a 5-speed gearbox. The bike employs telescopic front forks and gas-charged twin shock absorbers at the rear. Braking responsibilities are handled by a 240mm disc brake at the front and a 130mm drum brake at the rear.

V15 Power Up Design and Features

The Bajaj V15 looks like a small version of a cafe racer combined with a normal commuter. The trapezoidal headlight doesn’t really gel with the bike but gives it its own persona. In profile, the V15 is more appealing with the sculpted fuel tank, megaphone-type exhaust muffler and the multi-spoke alloy wheels. The fuel filler cap with the INS Vikrant logo is also a neat touch. The rear section gets a contrast-coloured grab rail and a petite LED tail lamp while the instrument cluster features a digital fuel gauge.

Honda Unicorn: The Honda Unicorn has started to look dated now, but what it does offer is a frugal and bulletproof engine. The Unicorn 150 is a good bet if you spend most of your time riding in city traffic and the engine refinement offered is still the benchmark in the segment. The only downside is the Unicorn’s price, which is significantly more than its rivals.

Hero Achiever 150: The Hero Achiever 150 has always been overshadowed by it rivals. But Hero has given it a new lease of life by launching an all-new model. The Achiever 150 is the only bike in its segment to get start-stop technology and boasts the best mileage figures for a 150cc bike. While the styling won’t please all, Hero’s enormous dealership network and killer pricing does make it an interesting option.

Bajaj has positioned the V15 as a 150cc bike for the price of a 125cc motorcycle. With its cafe racer-inspired styling, the V15 does manage to stand apart from its rivals, which is among the primary reasons for its success. While it has a frugal nature, the Performance from the engine is decent. Overall, the Bajaj V15 is a bike that will help you gather some eyeballs like no other commuter motorcycle currently on sale.

All V15 Power Up News

V15 Power Up Price in India