Mercedes-Benz has launched the C 43 AMG to slot in below the explosive C 63 AMG, as a rather affordable sports saloon. A few hot laps in the new AMG were more than welcome 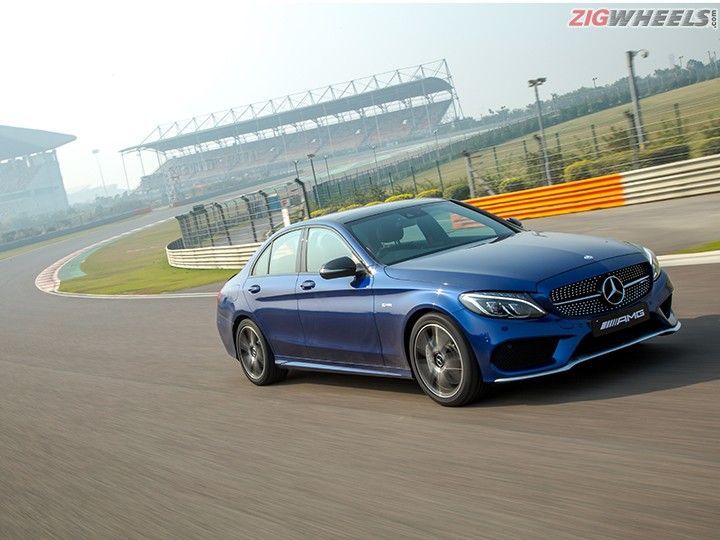 Abbreviations like AMG and BIC when used in unison can send hearts fluttering with excitement and we, like all enthusiasts, are very always open to the idea. And (thankfully for us!) Mercedes-Benz has made a habit of launching the go-faster, AMG versions of its cars at the premier racing circuit. So it wasn’t surprising to learn that the venue for the launch of the new Mercedes-AMG C43 was the Buddh International Circuit. The C 43 essentially sits below the rabid beast that the C 63 AMG is, so I was also hoping the experience of driving around the circuit would be a more fulfilling one, since it would be easier and thus more fun to drive. And that the car has been priced at Rs 74.35 lakh ex-showroom Delhi, seems to only sweeten the deal further.

The conditions were rather perfect, as it was a warm and sunny winter afternoon, and while I waited in the pits to head out, I felt slightly confused about the looks of the C 43 AMG. When you think of an AMG, the first image that flashes in your mind is of an angry looking beast in an outlandish colour with flared nostrils, flared wheel arches, rear wheel drive and an intimidating bellow from the exhausts. The C43 however, is a far cry from all that. It is in fact quite subtle. It looks a lot like the standard C-class which means it looks quite friendly. The key differences between the two aesthetically are redesigned bumpers with a brushed aluminium lip, larger air dams for the bigger engine, AMG wheels, AMG brakes (larger and visible obviously), rear bumper fins, quad exhaust tips and a tiny spoiler on the boot lid.

The cabin too features subtle sporty touches rather than a complete overhaul. The AMG flat-bottom steering wheel is in place and seats are covered in Alcantara on the seat backs and the squab generously. You could also opt for red seat belts to add to the sporty appeal. The clocks feature a chequered flag inlay on both the speedo and the tachometer, while a 5.5inch multi-information display sits nestled between the two clocks. Carbon-fibre inlays have been skipped to keep the luxury quotient intact. So you get complete leather upholstery with red stitching all round, along with brushed aluminium and wood inlays. The COMAND system too is in place with a large display screen, scroller and track pad. There are a couple of interesting buttons and switches, but we’ll come to that in a bit.

Thankfully, it doesn’t take long before it’s my turn. Get in and park yourself in the driver’s seat and you realise you are sitting quite low. And with a helmet on, the roof feels inadequate, especially for taller drivers. Turn the key, and the 3.0-litre twin-turbo V6 comes to life with an audible growl and a timed misfire before settling down quickly. I am instructed to slot the 9-speed G-Tronic transmission into drive and we start rolling. Instructions also include keeping the car in comfort mode (one of five you can select including an individual mode for specific settings) for the first of two laps and then switch to Sport+ on the next one to feel the difference in the car’s dynamics. Exit the pit lane, we floor the throttle. Though the free revving engine makes 367PS of max power and 520Nm of peak torque, it doesn’t feel too aggressive, unlike its larger siblings. Even in comfort mode, the car accelerates very quickly but sans the ferocity.

The AWD system works well, and provides ample grip even when you feel you might have overcooked the corner a bit. The suspension is well tuned too, and takes on the kerbs with ease. There is a bit of noise from the damping that’s transferred to the cabin but you rarely feel the bumps. I switched to Sport+ on finishing the first lap via the driving mode toggle switch on the centre console and the car seemed to have transformed into a different one instantly. Throttle response became sharper, gearshifts were quicker and the suspension stiffened up rather noticeably, while the steering weighed up to provide all of the feedback that was missing previously.

I attacked the second corner a lot faster this time, and was quick to realise that body roll was down by a big margin. The 31:69 torque split works to ensure the car follows the intended line, and helps cut oversteer. Out of the corner, I went hard on the throttle and the car catapulted forward as the engine unleashed all 367 horses, while my head dug into the headrest. Next corner, hard on the brakes with ABS, ESP and 360mm front discs working overtime, I flung the car into the right hander, riding the kerbs as the inside front tyre kissed the apex, and accelerated out with a confident heavy right foot. And that’s the beauty, all that drama and it didn’t bite back once.

The car gave me the feeling of being in control, and I could push it around corners without having to worry about ending up in the gravel traps. The C43 AMG is the new breed of tier 2 performance cars that attempt to strike a balance between track and road performance. A couple more laps and I was rather sure, the C 43 knows how to strut its stuff on track. Laying down the power was rather easy, the electronics keeping the rear in check, while corner exit were certainly quicker thanks to the 4MATIC system distributing the power well all round. The big AMG rotors offered ample bite at all times, and the paddle shifters certainly helped me stay in charge of the gear changes.

You don’t have to be a track veteran or an experienced driver to be able to use all the power and grunt the C 43 offers. It’s a car meant for enjoying a bit of enthusiastic driving without worrying about making a mistake, thanks to its forgiving nature. What’s noteworthy is how easily the car changes character, and that’s something that impressed me the most. We’ve only had a chance to drive the car on track, and it remains to be seen how the C 43 AMG will feel on our roads. That said, Comfort mode did seem apt for city driving, and I expect the suspension to be pliant, probably just a shade stiffer than the regular C-Class. Performance should be usable too, and I do not think the C 43 AMG should have a hitch in turning into your everyday saloon. Switch to Sport+ and there’s lots of fun to be had on a race track or your favourite hill road. And as I mentioned, the price tag of Rs 74.35 lakh ex-showroom is a good deal for what the C 43 AMG has to offer in terms of comfort, luxury and not to forget, the performance. Of course, the C 43 AMG is a car that will not strike terror in your mind when you hear AMG and BIC together in a sentence.