Kia’s second offering is both a completely new breed of four-wheeled transport for us and also Kia’s Indian flagship for the foreseeable future. Naturally, we have a lot of questions: is it comfortable? Is it versatile? More importantly, how easy would it be living with something this large? 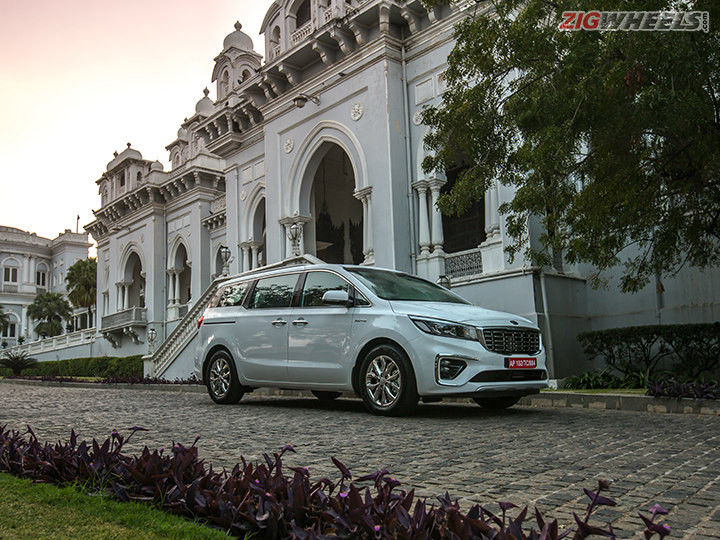 The Carnival is BIG. On size, space and practicality. It also promises a premium cabin experience for every occupant. It’s more than a match for the current MPV standard - the Innova - and could even outdo the much higher positioned V-Class in some areas. And since we’ve not really seen anything quite like this beast before, we’re going to break up this first drive into the view from a few different perspectives.

In the eyes of the onlooker, the Kia Carnival is about as good looking as a vans could get. It does this by keeping things simple. Kia’s signature ‘tiger nose’ aluminum finished grille, large LED projector headlamps (with daytime running lamps) and ‘ice cube’ fog lights make for a handsome face.

Strong and straight character lines on the side emphasises its 5.1-metre length, while the 18-inch chrome alloys add some bling to the profile. But, we’re not quite sure the blingy wheels are in tune with the rest of the design.

Viewed from the rear, the Carnival keeps it simple with large, rectangular tail lights that house some LED elements, and a subtle chrome strip.

In terms of dimensions, it's almost 400mm longer and 155mm wider than an Innova, and sits on a much longer wheelbase as well. The Toyota is a little taller, though. And while Kia hasn't released ground clearance figures, it appears that the Innova has it beat here as well.

From The Driver Seat

From the driver’s perspective, you see a conventional design for the dashboard and the instrument cluster. Where the Carnival takes things up a notch, however, is in the finishing. Everything feels premium with soft touch materials on the dash, a leather-wrapped steering wheel and nappa leather seats in this range topping Limousine variant.

In terms of features it packs in a lot, so there’s a 10-way adjustable, powered driver seat which is also ventilated, wireless charging and three zones of climate control. Infotainment is through an 8-inch touchscreen up front (with navigation and Kia’s UVO connected car tech) and two 10.1-inch touch screens in the second row. There’s Apple CarPlay and Android Auto for the front screens and the systems is even wireless CarPlay enabled. There’s even two sunroofs and plenty of luggage space with the ability to fold away seats to free up even more.

The first big question that anyone has with driving anything of this width and length is, of course, how easy is it to manoeuvre in tight spaces and crowded streets. And our fears were quickly put to rest on this drive. With the seat set high and the tilt-telescopic adjustable steering wheel set to a comfortable driving position, visibility all around is fuss-free.

It also appears to have a tight turning circle for a car its size: a couple of U-turns on a dual carriageway and negotiating a tight circle was no problem at all. We’d love to give it a go in tightly packed mall parking lots, though!

On the move the Kia Carnival is also very easy to drive. In fact, all the controls: the steering rate, the gentle throttle response and the brakes, all force you to drive sedately. With 200PS and 440Nm of torque, it definitely has the legs for the highway. However, you will have to plan your overtakes given the sheer size of the Carnival. At around 100kmph, the engine is ticking over at a very gentle 1500rpm and those speeds, engine noise, wind noise and road noise are kept in check. Kia credits extra sound-deadening material in key areas for this.

That said, the brakes could’ve been stronger. They’re on the spongy side so this forces you to drive more cautiously and lift off well in advance. And, unless you hurry it, the 8-speed automatic is smooth and shifts are practically imperceivable. There’s an eco mode too and Kia claims a fairly impressive 13.9kmpl ARAI-certified mileage for the Carnival. That’s quite believable, too, considering that after a lot of static running and a lot of walking speed drives around a parking lot for the shoot, our test car only dropped down to 10kmpl. We’ll still put this claim to test when we get our hands on one for a proper road test.

So, the Carnival isn’t a drivers delight but it isn’t giving them any unnecessary headaches either.  And this forced relaxed driving style has a completely positive effect on the comfort in the rest of the cabin. With all this gentleness making the passenger experience all the better for the second, third and even fourth rows.

It’s pampering occupants with a comfortable ride quality too. Our drive in Hyderabad was over mostly good roads with just a few bad patches and we had no problems over them either. Side to side motion, which is always an issue on long vehicles, is well controlled. Even in the third row, changing lanes doesn’t give you that uneasy feeling. However, taking corners even a little faster than normal will have third row passengers complaining.

It would be interesting to see how this super long wheelbase and comfortable suspension setup handles really bad roads and large speed breakers. That said the initial impression is that it still rides head and shoulders above any MPV and even the most premium SUVs on sale today.

Boss seat in an MPV? In the top-spec ‘Limousine’ variant, you get versatile ‘VIP’ captain seats in the second row. They slide forward and back, adjust for tilt and also have leg-rests that extend down (all manually). The seats can also be moved outwards or inwards to allow for better ingress for third row passengers. Pick the seven-seater configuration in the other two variants and you miss out on the VIP seats. But the second row can ‘stand up’ against the front passenger seats, allowing an even wider and more comfortable access to the third row.

Experientially, the VIP seats are super comfortable, but the leg rest is a bit gimmicky. To make full use of them would require a little more room than there is and tall passengers will find their feet fouling with the front seats.

There’s also two touch screen infotainment screens that are standard in the Limousine variant. These can be paired with your smartphone to stream content over and above the usual USB, HDMI and Aux-In inputs. There’s also  a 220V AC power socket in the rear, a smart air purifier, and powered sliding doors. Climate controls for the passenger area are curiously placed on the right side of the headliner over the driver’s head and within reach of only the right second row captain seat. This curious placement is seemingly done to allow for them to be in easy reach of the driver.

There’s also the larger of the two sunroofs over the second row, and this combines with the front sunroof to make the cabin all the more airy. The large windows on the sliding doors also help and these even open and close with a one touch function.

Kia’s acing the space game in the third row. Even with three abreast, you could cover a good distance without too much discomfort. There’s ample headroom and legroom with the ability to tuck your feet under the seat in front. You can even recline the row to make things even more comfortable. The third row also gets its own privacy blinds, a USB charger and roof mounted air con vents as well. It’s by far the best third row experience for adults we’ve seen in anything on sale currently bar none.

With all three rows in place, there's 540 litres of space: enough for four medium sized hard cases to fit with still more space to put stuff on top. You can also fold the third row in a 60:40 split, or completely fold them away and free up enough space to move house and still carry four in comfort.

With the third row folded down flat, there’s a monstrous 1624 litres. And if you really need to, you can unbolt the second row and free up a massive 2759 litres. Enough for a motorcycle, we reckon. Also, the tailgate is even powered in the top two variants and features a hands-free function as well.

We spent a majority of our time in the Carnival Limousine, the flagship variant. You could also choose between the base-spec Premium and mid-spec Prestige variants, and among 9-, 8- and 7-seat options.

The 8-seat configuration is similar to the seven-seater except that the wing seats are now a bit smaller and are joined by a removable pod that sits between them. This doubles up as both a reclining seat and it can also be folded down to form an armrest with cupholders.

With the 9-seater configuration, there are some signs of a compromise. The third and fourth row is a little cramped and you’d have to ‘adjust’ in the first three rows to fit nine adults in the car. The captain seats get successively smaller as you move rearwards and the fourth row takes up all the luggage space. The second and third captain seat rows slide forward to adjust leg room, while the fourth row can be folded down to leave six captain seats and a flat storage space at the back. So, there is some flexibility to this configuration too.

Kia is positioning the Carnival as its flagship premium offering and we don't see it being priced below the Rs 30 lakh mark (ex-showroom). Its head and shoulders over the current set of MPVs in the Indian market in terms of sheer space and luggage option as well as giving you a premium, bordering on luxury cabin experience. And so we’re sure it's also going to give a lot of popular premium SUVs a good run for their money in terms of comfort and space. Kia Carnival Price

But now that we have a fair idea of what the Carnival is about, it's actually the Kia Carnival that's really asking us a question - how far can we stretch our imagination to make the most of its broad set of abilities? Update: The Kia Carnival was launched at Auto Expo 2020 and is priced between Rs 24.95 - 33.95 lakh. 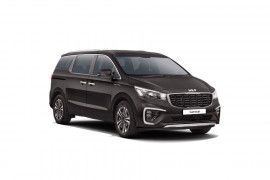 All Comparisons of Carnival

View All
View All
Trending Kia Cars
All Kia Cars