A new SUV arrives in India's SUV-friendly market. It also undercuts its nearest rivals, the Fortuner and the Endeavour, by almost three lakhs. But, will it excite? 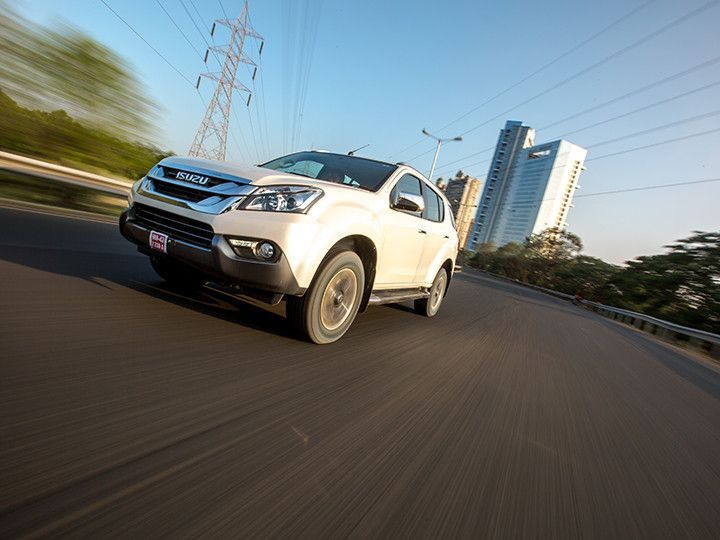 By now you would have heard about this Japanese manufacturer which recently launched the D-Max V-Cross (pickup) last September. The MU-X from Isuzu now replaces the discontinued MU-7 SUV that was launched early in 2013. Isuzu will be hoping the MU-X will continue in the footsteps of the popular V-Cross and bring in the sales numbers that its improved dealership network can handle. They are known for their reliable and frugal engines, and with them having just launched the MU-X at a very attractive price of 23.99 lakh (2x4) and 25.99 lakh (4x4), we were curious to see how big a splash it could make in the segment.

There are some SUVs that make an impression with bold, over the top styling and then there are those that prefer to take big strides quietly. The MU-X prefers the second approach, with some very clean body lines, and even though there is a healthy dollop of chrome in the recipe, it has a certain understated charm to it. A fair share of that chrome is in the front grille and the face that carries forward the looks of the V-Cross fascia, with some subtle differences. The Isuzu badge is now set further back between the first two slats of the grill and that, with the darker background, makes the logo more visible. The two-tone bumper (body colour and black plastic) houses a set of fog lights and the daytime running LEDs as well.

The side profile is a clean look with a straight shoulder line connecting the two slightly flared wheel arches, and from this angle it shows its relationship to the Chevrolet Trailblazer. The 17-inch alloys are quite attractive and come shod with Bridgestone Dueler H/T tyres (Highway Terrain) that hint at the more road-focused intentions of this SUV.

The all-black dash of the MU-X contrasts rather nicely with the light cream seats and headliner. It's not love at first sight though, and that's mostly down to the fact that almost everything you see is plastic. That said, the plastic is all textured and doesn't feel too bad in use. Climb into the driver’s seat and you're greeted with a nice leather-wrapped steering wheel and leather armrests on both sides and you feel your initial impression start to improve. The seats are roomy and comfortable and the driver’s side is electronically adjustable for reach, incline and height.

The second row has ample legroom for full-sized adults and though they are only adjustable for recline, I don't see this being something passengers will complain about. The third row, however, will only fit small adults for short journeys with a low-ish seat height and very little legroom. Passengers in the third row will at least remain cool in the heat with their own dedicated rear ac vents in addition to two vents for the second row. The climate-controlled air con functions beautifully too, cooling down the cabin in all three rows fairly quickly on the very hot day of our drive.

The 7-inch touch screen infotainment system is a bit of a let-down, with poor sound and a slightly complicated user interface. Isuzu has thrown in a 10-inch dropdown video screen for the second and third rows and this brings some 'wow' factor to the experience, for passengers at least.

There are some really practical touches to the design and ergonomics. It is packed with convenient storage spaces all round and the way the rear seats fold down to allow access to the third row and even the ease at which you can drop or fold up the third row shows that it is a well thought-out, practical SUV. Unfortunately, it's no match for the likes of the Fortuner and Endeavour in the luxury department and this is where we think that Isuzu have made a mistake. Internationally, there is a new, facelifted MU-X (with improved interiors) on sale and this could have been a better bet considering that the major players in the segment have recently moved the bar up a few notches.

Both the 4x2 and four wheel-driven MU-X get the same 3-litre, four cylinder, turbodiesel mated to an automatic transmission. The engine puts out 177PS and 380Nm of torque and has sufficient grunt for most situations on the road, letting you make smooth progress. The diesel burner drives forward in a linear manner, with a variable geometry turbo helping smooth out the power delivery. But while smooth and powerful, both in town and on the highway, there is a lot of engine noise that creeps into the cabin as revs increase, but more on that later.

The way the gearbox behaves took some getting used to for me. The thing I found a little strange was, when you lift off the accelerator at speeds of up to around 60kmph, the transmission seems to disengage and the engine, now unloaded, drops to idle (800rpm). There is no engine braking at all and it feels like you're coasting along in neutral. The transmission has been designed like this to boost the fuel efficiency I believe, but it also means that you can't lift off to slow down in traffic; you have to move from throttle pedal to brake to slow down. Or you could shift into sequential mode and it will then hold the gear you select. It’s not something to be worried about and it does help drive efficiency up to a claimed 13.8kmpl. That’s quite impressive for a three-litre engine and a near-three-tonne SUV. There is an intelligent adaptive grade logic control that cuts in on ascents and descents, holding gears on the way up and providing engine braking while coming down slopes.

The four wheel drive system is a switch-on-the-fly one between 4x2 and 4H (up to 100kmph if needed) while shifting to 4L needs you to be in Park before you can select the low ratio mode. Look out for a complete road test soon with more off-road running to really comment on how the 380Nm of torque pushes the two and three quarter-tonne SUV around when the going gets mucky.

For a ladder frame chassis the MU-X is a fairly composed beast. There is a fair deal of body roll when taking corners but there is a healthy bit of understeer built into the chassis too. So it prefers to drift wide (the safer alternative) rather than want to come around on you when pushed over the limit. Over small and big bumps the suspension is well composed, absorbing the impacts with not much pogoing after. The suspension is also very quiet and there is no crashing coming from the wheel wells even on really large bumps or speed breakers. The cabin is also super quiet when on the move and the engine revs are low, but as soon as revs cross 1800rpm which is where the engine starts producing its peak torque, the cabin is filled with the drone from the engine.

The steering is a little vague at the centre point but manoeuvring in traffic is easy with the light weighted wheel. As speeds go up on the highway the steering weighs up well though the vague feeling lingers on at the central position.

Isuzu has proved that it can make a reliable off-roader with the V-Cross, which has been lauded for its reliability and durability in the markets it runs in. More proof came early this year as a nearly stock V-Cross finished third in the 2017 Desert Storm - a rally raid famous for being a gruelling test on machinery. So there is no reason to believe that the MU-X won’t bring this reliability to the table. It’s a very practical package too, with well thought out design and feel to the bits inside. The Fortuner and the Endeavour may have moved the goalposts quite far away for the competition but the MU-X does undercut the big players in the segment by nearly 3 lakh rupees at their starting prices and a whole lot more for the automatic versions, gaining points for value for money. But we feel that the facelifted (new interiors and 6-speed transmission) MU-X on sale in other markets may have been better suited to take the fight to the competition.