We also got a glimpse at the cabin, and it seems premium and feature-loaded 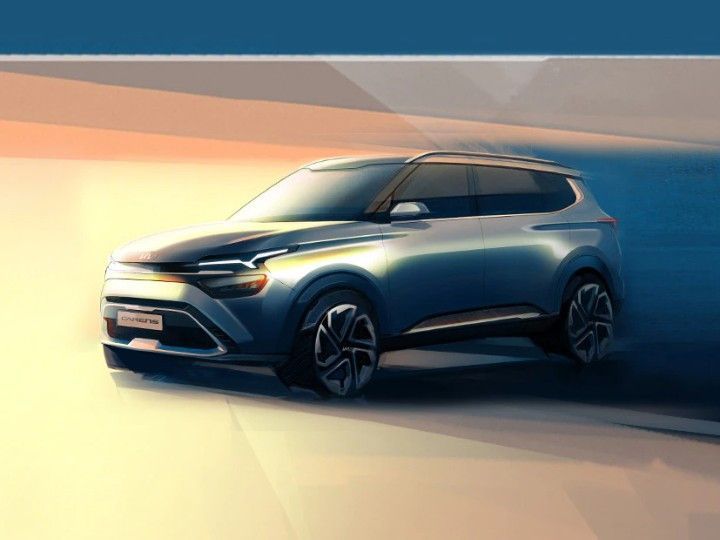 Barely a week after Kia dropped the first teaser of the Carens, the carmaker has released design sketches of the upcoming Alcazar-based three-row SUV, giving us a better idea of what it could look like in production form. And if first impressions are anything to go by, a good-looking car is coming our way.

The Carens debuts Kia’s new ‘Opposite United’ design language in India. It seems like the SUV sits pretty high and has a pretty clean silhouette. There are two defined character lines lending it the SUV-ness. The face appears upright with Kia’s latest iteration of the traditional tiger nose grille and quirky LED DRLs that are in line with the carmaker’s latest models abroad.

Don’t expect the obscenely large five-spoke alloy wheels in the production model, however, we reckon it’ll sport a similar design. The rear stands upright, with new connected tail lamps and a muscular bumper. Completing the exterior design is the body cladding that starts from the chunky front bumper extending to the rear.

While the teaser image has cleverly hidden a fair bit of the cabin, Kia has hinted at a packed feature list. The cabin should be upmarket with plenty of different textures and finishes. At the centre of a wraparound dashboard there’s a 10.25-inch touchscreen infotainment system which should come with Android Auto and Apple CarPlay as well as UVO connected car tech.

Aside from a slew of steering mounted controls, expect a i20-like digital instrument cluster, a Bose sound system, a sunroof, a wireless phone charger, and ventilated front seats. Aside from a 7-seater layout with bench seats for middle row occupants, expect a 6-seater option  with captain seats. Multiple airbags, ABS with EBD, front and rear parking sensors, electronic stability control, and  blind spot monitoring are likely to be some of the safety features on offer.

We also spotted an automatic gear knob (likely to be a 6-speed torque converter) in the cabin sketch. The other gearbox will likely be a 6-speed manual. Expect them to be paired with the Alcazar’s 115PS 1.5-litre diesel and 159PS 2-litre naturally aspirated petrol engines. A 115PS 1.5-litre naturally aspirated petrol engine might also be on the cards as well.