Husqvarna is Developing A 170PS+ Vitpilen! 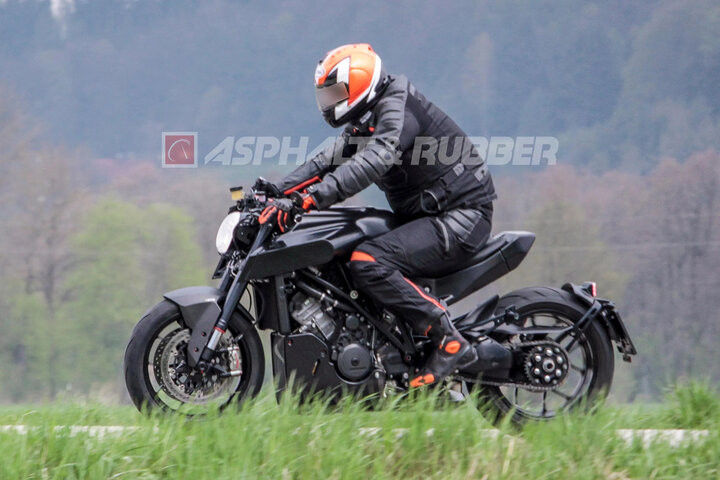 Images of what could possibly be the Husqvarna Vitpilen 1301 have surfaced on the internet. Now, we all know that the Swedish bikes are based on existing KTM motorcycles, but a cafe racer powered by the manic KTM 1290 Super Duke? Heck, bring it on, we say!

The test mule appears to be in the initial stages of testing, and bears no mark of either brands. However, a closer look reveals quite a lot. For starters, the fuel tank is the most obvious bit that confirms the bike is indeed a Husqvarna. Then comes the new belly pan, which resembles a bigger version of the one seen on the Vitpilen 250. And though there isn’t a head-on shot of the mule, the circular headlight is a typical Husky element.

The frame, swingarm, alloy wheels, and the suspension and braking components are lifted straight off the KTM 1290 Super Duke. However, Husqvarna has changed the subframe with a stubbier unit and changed the exhaust end can, though the header pipes and catalytic converter is the same as the flagship Duke.

KTM has been pushing the limits with the 1290 Super Duke, with the RR model dishing out 182PS and 140Nm and tipping the scales at 180kg! We expect Husqvarna to dial the performance down by 8PS to 10PS. Bummer, right? But fret not, someone else wanted to push the envelope further.

And that’s Brabus. Yes, the same brand that has been sprucing up Mercedes’ cars since 1977 has been enticed by the Super Duke and has begun testing the bike. Trademarks for the Brabus 1300 R were filed last year, and the first set of spy shots give us a glimpse of what to expect from Brabus’ first motorcycle.

Though the headlight of the mule appears to be of a Husqvarna, the Brabus Monoblock Z Platinum Edition alloy wheels are a dead giveaway. Furthermore, the generous use of carbon fibre, and the brake-cooling vents aren't really Husqvarna’s style. In fact, the Brabus 1300 R is almost 6kg lighter than the Super Duke as per the type-approval document.

As much as we’d love to see the Husqvarna 1301 and Brabus 1300 R grace our shores, these bikes won’t be coming to India. But it’ll be interesting to see KTM’s LC8 engine in two new avatars.