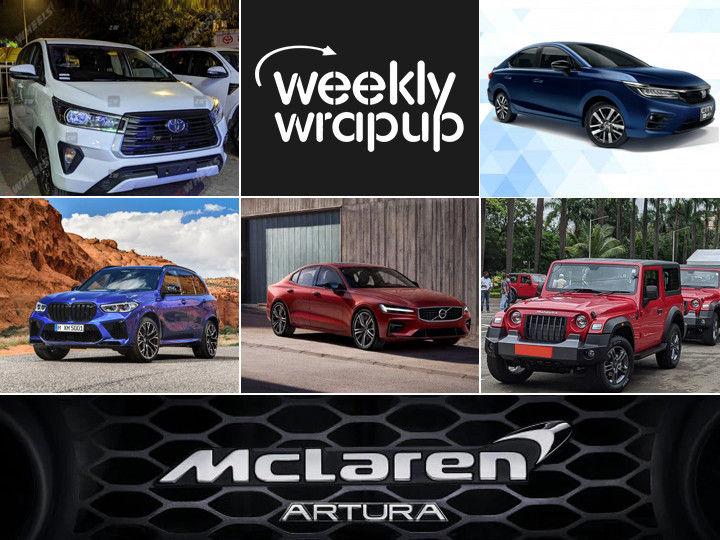 The festive season has ended but the past week has been anything but quiet. The events ranged from a bunch of launches and unveilings to a different kind of name for McLaren’s new supercar. So without further ado, let’s dive right in.

The Toyota Innova Crysta has arrived in its latest avatar. After numerous spy shots, the changes to the MPV, especially the front, were finally confirmed. For prices, powertrains, and variants of the facelifted Innova, head here.

Honda has launched the hybrid version of the City in Thailand. With the Japanese carmaker planning on launching a mass market hybrid car in India, could the Honda City Hybrid reach our shores? Head here to find out.

The Lamborghini Urus and Audi RS Q8 see a new competitor in India. The new BMW X5 M Competition gets a 625PS 4.4-litre V8, M-specific upgrades, and can go from nought to 100 in a blistering 3.8 seconds! Head here for all the details on the newest German super-SUV.

The second-gen Thar has created quite a stir since its launch on October 2. The iconic SUV’s latest version is now booked until May 2021. The good news is that since its 4-star Global NCAP rating, Mahindra is planning on introducing the safer front-facing rear seats in the base-spec variants once bookings resume.

The latest version of the Swedish carmaker’s entry-level sedan in India has finally debuted, after a long wait. Built on a new platform and powered by a 190PS 2.0-litre petrol engine, the S60 will be available for booking from January 2021. Head here for the complete scoop on the S60.

McLaren has revealed the name of its upcoming hybrid supercar, and no, it is not another number. Yes, the latest offering from Woking will be called Artura. It will be powered by a twin-turbo hybrid V6 and sit between the GT and the 720S. Check it out here.