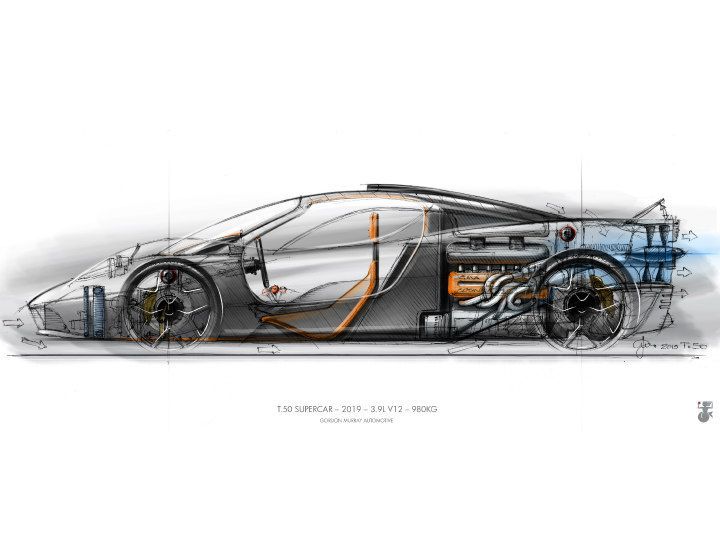 Legendary designer Gordon Murray has been an important figurehead when it came to innovation in car designs over the last 50 years. From the revolutionary ‘Fan’ car of the 1970s  to the creation of what is arguably the most important hypercar ever in the world, the Mclaren F1, Gordon Murray has a highly decorated CV. The man who gave us all these legendary cars over the last few decades is now planning to add to his prolific CV with the reveal of McLaren F1’s spiritual successor, the T.50.

Gordon Murray has revealed the early sketches of the T.50. Almost three decades post the McLaren F1, this ambitious project is now underway.

To be manufactured by Gordon Murray Automotive (GMA), the new T.50 will be a mid-engined, rear-wheel drive supercar. At 4.4m, it will be slightly longer than the Mclaren F1, but will still be smaller than the Porsche 911.

The T.50 will be powered by a naturally aspirated 3.9-litre V12 petrol engine that has been developed in collaboration with Cosworth. It will make 650PS of max power along with 450Nm of peak torque. At the behest of secret clients, the engine is mated to a six-speed manual transmission developed by Xtrac.

It will weigh a measly 980kg, which is 120 kg lighter than the McLaren F1, and will be considerably lighter than its other hypercar counterparts. The T.50 will have a power-to-weight ratio of  672PS per ton, which exceeds any other road-going naturally aspirated sports car. The braking system, also provided by Xtrac, combines lightweight alloy calipers and carbon-ceramic discs for effective stopping power.

The T.50 will get an all-carbon fibre tub like the McLaren F1 and even the body panels will be forged from carbon fibre. Its suspension components and the 19-inch front and 20-inch rear wheels will be made from aluminium. Dr Murray claims that carbon fibre components won’t deliver the durability that he requires. Safety features on the T.50 will include a single airbag for the driver, ABS and traction control. The T.50 will trademark its extreme nature with very few driver assists, in line with Murray’s car design philosophy aiming for maximum driver control.

In terms of aerodynamics, the T.50 takes inspiration from the McLaren F1. The most interesting aerodynamic innovation is a 400mm electric fan at the back of the car. This is a concept which will help generate underbody downforce and cornering stability by literally sticking the car to the road. It is a throwback to one of Murray’s earlier innovations in Formula One called the ‘Fan Car,’ specifically the 1978 Brabham BT46B where it debuted. Thanks to it, the BT46B so thoroughly dominated the one and only race it competed in that it was immediately banned from the competition. Such is the price of innovation!

The T.50’s interiors will retain the fighter-jet style driving position from the McLaren F1 with a passenger seat on either side. Access to the cabin will be achieved using dihedral doors. To save space, the seats won’t be heavily padded.

Gordon Murray has almost finalised the T.50’s design and has announced that it will be produced in the UK, with an expected sticker price of 2 million pounds (Rs 17.56 crore). It will be limited to a production run of 100 units.

The legendary Mclaren F1 was a masterpiece of its time and can never be replaced. But will the T.50 actually succeed in replicating the magic that was the F1? We will find out when the T.50 rolls out by early 2022.