Next-Gen Bentley Flying Spur To Be Revealed On June 11

New Flying Spur could be the sharpest Bentley sedan yet! 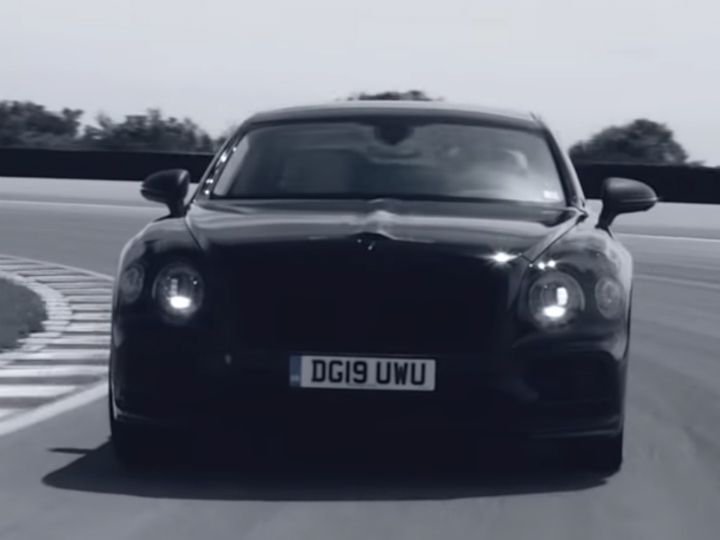 British carmaker Bentley will celebrate its 100th year anniversary by revealing the next generation Flying Spur on June 11. It had recently released a teaser of the luxury sedan driving around a racetrack. This suggests that the new Flying Spur could be sportier than ever before. The teaser also highlights the tech upgrades it features under the skin. Read on to know what to expect from the upcoming limo.

The next-gen Flying Spur gets major changes under its skin. While the platform details haven’t been revealed yet, it’ll feature all-wheel drive steering which is a first for a Bentley. Just like the previous iteration, this car also gets all-wheel drive. But this time around, 100 percent of the power is directed to the rear wheels and while a slip is detected, the power is directed to the front. The Flying Spur also features ‘Bentley Dynamic Ride’ which changes the stiffness of the suspension based on the conditions to minimise body roll.

While the engine details haven’t been revealed yet, the Bentley Flying Spur is expected to feature the plug-in hybrid powertrain from the Bentayga SUV. The 3.0-litre V6 engine is mated to an electric motor producing a combined output of 449PS, the SUV is capable of hitting 0-100kmph in 5.5 seconds. Expect the sedan to hit the ton faster. Apart from the hybrid powertrain, the Flying Spur is likely to borrow the 4.0-litre V8 and the 6.0-litre W12 motor from the 2018 Continental GT. On the grand tourer, the V8 motor churns out 550PS of peak power and 770Nm of torque. The W12, on the other hand, makes 635PS of power and 900Nm of torque. Both these engines come mated to an 8-speed dual clutch automatic transmission.

The design of the upcoming Flying Spur is more of an evolution rather than a revolution. It features a huge rectangular mesh grille and Bentley’s trademark twin circular headlamps. But this time around, the larger units are placed are placed closer to the grille while the smaller units sit on the edge. The teaser also reveals that the carmaker will ditch the front logo in favour of a flying ‘B’ that pops up from the hood a la Rolls Royce Ghost. Moving on to the side, the Flying Spur gets clean lines with a muscular haunch that starts above the rear wheel arch and flows cleanly to the boot. The rear end is where most of the changes lie with the number plate housing now moving to the rear bumper. A sleeker set of LED tail lamps and twin oval exhausts are the icing on the cake.

While the next-gen Flying Spur’s interiors haven’t been revealed yet, we expect the carmaker to borrow plenty of design traits from the Bentayga and Continental GT. It will also feature the latest tech from the carmaker. The teaser also reveals that the Flying Spur will feature a digital driver’s display as seen on all luxury cars. Also, being a Bentley, expect the carmaker to drape the cabin with expensive pieces of leather, wood and metal with various customisation options as well.

The upcoming Bentley Flying Spur is expected to launch in international markets by the end of this year. While it’s yet to be confirmed for India, we expect the carmaker to bring the latest Flying Spur to our shores by 2021. Considering the amount of tech upgrades the new Flying Spur gets, we expect it to be priced at a premium compared to the current car, which retails from Rs. 3.22 crore to Rs 3.41 crore (ex-showroom Delhi). The Bentley Flying Spur will take on the likes of the Mercedes-Maybach S600 and the Rolls Royce Ghost.

Stay tuned to ZigWheels for more details of the next-gen Flying Spur.