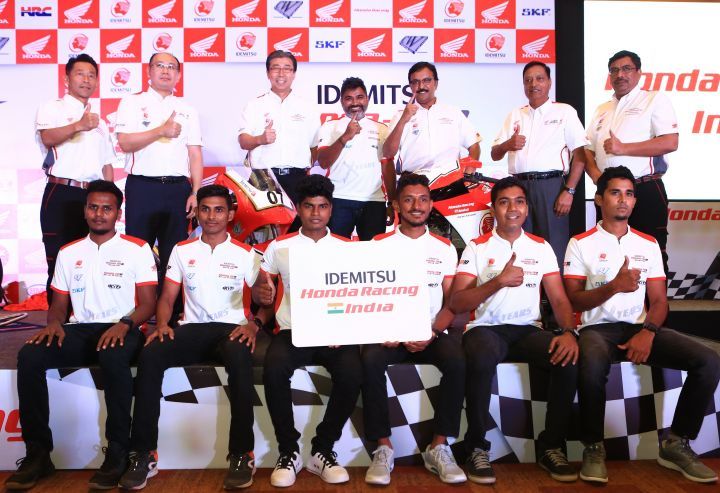 IDEMITSU Honda Racing is set to take Indian motorsports by storm in the second round of the MRF MMSC FMSCI as it will introduce its acclaimed Moto3-spec NSF250R in the domestic racing division. It will also enter the ProStock 201-300cc category of national championship. The move aims at expediting the growth of eight young riders by giving them exposure to global motorsport standards.

To shed some light, the Moto3-spec Honda NSF250R features a high-revving 249.3cc, DOHC, liquid-cooled, single cylinder engine that puts out 48.2PS of power while weighing mere 84kg (kerb). Eight lucky riders will have the opportunity to gain hands-on experience with this bike, which will help nurture them for more competitive international races. The list includes rider from Thailand Talent Cup, namely Mohammad Mikail and Kritik Habib, 12-year-old Sarthak from Pune, Varoon, Charan T, Geoffrey, Kavin from Chennai and Mohsin from Mallapuram.

Moreover, the brand will also enter the ProStock division with 13 riders to increase its lead even further in the national championship. A total of 19 riders will participate in the NSF250R and CBR150R class of the IDEMITSU Honda India Talent Cup.

More details available in the press release below:

This weekend, Honda brings the World to India in Round 2 of INMRC

Sharing overview of Honda’s game-changer plans for Indian motorsports, Mr. Prabhu Nagaraj, Vice President, Brand & Communication, Honda Motorcycle and Scooter India Pvt. Ltd. said, “This weekend, Honda starts the new era of Indian motorsport. The structured development platform of Talent cup is giving a 360-degree boost of Indian motorsport, right from identifying potential iconic riders of tomorrow who are as young as 12-year-old today, to accelerating their development on a world class machine like NSF250R. Parallely Honda is on an overdrive to continue its domination in the PS165cc class of national championship while taking on the new challenge of entry in PS201-300cc class. With riders like Rajiv, Sarath, Anish and Aravind leading the charge and newcomers like Mikhail and Kritik fast learning in Thai Talent Cup, Honda is bringing new energy to Indian racing.”

Starting Round 2, Honda brings out the big guns and for the first time ever, Indian two-wheeler racing will match global standards. The structured development platform of IDEMITSU Honda India Talent Cup now gets more muscle with the Moto3 machine NSF 250R in addition to CBR 150R.

IDEMITSU Honda India Talent Cup–NSF250R class will fast-track development of 8 future stars of racing and propel them to international stage from an early age. The riders include Thailand Talent Cup riders Mohammad Mikail and Kritik Habib in addition to 12 year Sarthak from Pune and Varoon, Charan T, Geoffrey, Kavin from Chennai and Mohsin from Mallapuram. Committed to structured development of young riders, Honda has rigorously trained these young guns on their physical fitness, mental strength and their race-craft.

Eyeing leadership in national championship Honda is fielding 13 riders from 4 teams in 2 classes.