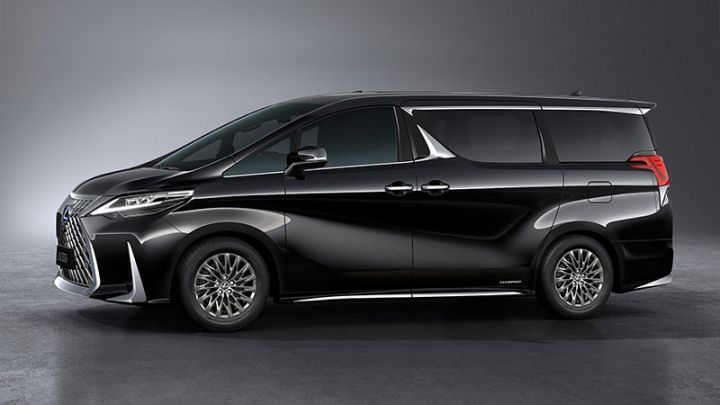 Lexus, Toyota’s luxury arm, has unveiled its first-ever MPV, the LM, at the 2019 Auto Shanghai motor show. Based on Toyota’s Alphard MPV, the LM has been launched in China and will go on sale in other Asian markets later this year.

Let’s start with the most striking element of the LM - it’s face. The LM gets a massive spindle grille flanked by sleek LED headlamps and sharp LED DRLs. The fog lamps sit on the lower half of the bumper and gets a large L-shaped chrome applique. The side profile of the LM looks similar to the Alphard. However, the slab-sided MPV does get a few chrome elements to distinguish it from the Toyota. This includes a chrome strip below the front windows that kinks at the B-pillar and flow on top towards the rear of the MPV. The dual-spoke alloy wheels are quite stunning, to say the least. It also gets more muscular wheel arches to make it look less like a panel van and more like a luxury ocean liner on wheels. At the rear, the LM gets a connected LED tail lamp with a thick chrome underline that reduces visual bulk.

But the cabin is what truly sets the LM apart from the Toyota it is based. While the Lexus LM can be had with seven seats, it’s the four-seat version that took our interest. In this configuration, the LM seems more like a private jet than an MPV thanks to the front and rear rows being separated by a glass screen which is inspired by Chinese screens. Being a Lexus, the cabin is draped with high quality leather and wood finishes. You get a full home theatre-like TV display at the rear on which you can watch your favourite movies on. The two independent seats at the rear can put your couch at home to shame. Talking about the equipment on offer, the LM comes equipped with Leysonson 19-speaker Leysonson sound system, double layer noise reducing glass and a 14-litre refrigerator. There is also a rear touch display through which you can operate all the features like the air conditioning, entertainment and others.

Lexus has given the LM two powertrain options. The LM350 gets a 3.5-litre V6 while the LM300H gets a 2.5-litre, 4-cylinder hybrid with a combined power output of 283PS. The MPV can be had with either front-wheel drive or all-wheel drive configuration.

With the launch of the Mercedes V-Class earlier this year, there is a possibility that Lexus could introduce the LM here in India to attract business people and luxury fleet owners. If launched, expect the Lexus LM to be priced around Rs 70 to Rs 85 lakh mark.