Lamborghini brings out the big gun to retake Nurburgring record 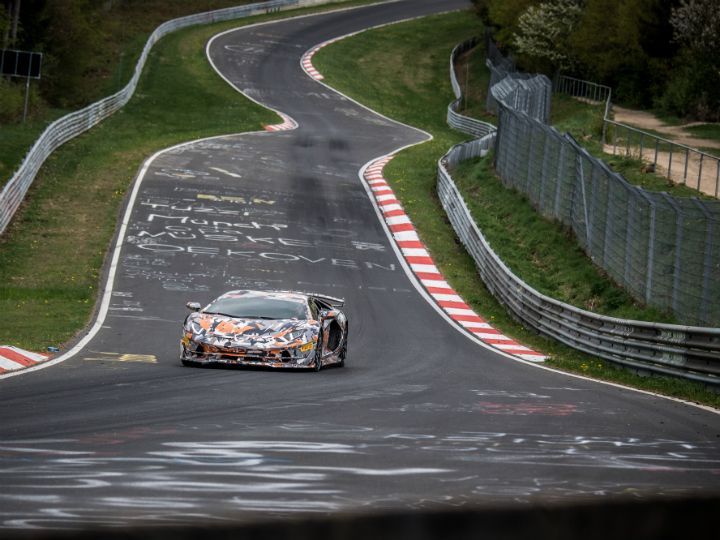 Lamborghini’s back at the Nurburgring with a vengeance. After being allowed to bask in the glory of having the quickest production car around the revered Green Hell by Porsche for a mere six months, the company has taken the king-of-the-ring title back. Lamborghini did it with the yet-to-be-unveiled Aventador LP 770-4 Superveloce Jota (SVJ for short), one of the last huzzahs for the Aventador before it is eventually replaced with a hybrid supercar in a couple of years.

Driven by Lamborghini factory driver Marco Mapelli, who also set the previous record in the Huracan Performante, the Aventador SVJ set a new record time of 6:44.97 minutes - 2.38 seconds faster than the Porsche 911 GT2 RS. It is also faster than the all-electric Nio EP9. You can check out the video below:

The Aventador SVJ will be revealed in the flesh at the Monterey Car Week at California in August 2018, and this record should give it even more cred at the event. If you are wondering, ‘Jota’ is a type of fast-paced Spanish dance routine, and a suffix used by Lamborghini on some of their fastest cars - a tradition which began with the Miura P400 Jota in 1970!

The Lamborghini LP 770-4 SVJ takes many of the concepts of the Huracan Performante and adds more power to it. It features an improved version of the Aerodinamica Lamborghini Attiva (ALA) active aerodynamics package which debuted on the Huracan for better handling in the corners and faster top speeds in the straights at the same time. There’s also the four-wheel steering which improves grip in fast corners and reduces turning radius in the slower ones.

Lamborghini had to re-engineer the suspension, tyres, steering, electronics and, of course, the engine. The 6.5-litre, naturally-aspirated V12 now develops 770PS of maximum power while shrieking at 8,500rpm and 719Nm of peak torque at 6750rpm - but what these numbers don’t tell us is how the power delivery range has increased over a wider rev band. The engine is still paired to a single-clutch 7-speed automated manual transmission (yes, an AMT), with power sent to all four wheels. Specifically designed tyres from Pirelli were issued for the record run. These will be available as an option for potential customers who want to enjoy the thrill of driving one of the sharpest Aventadors of all time.