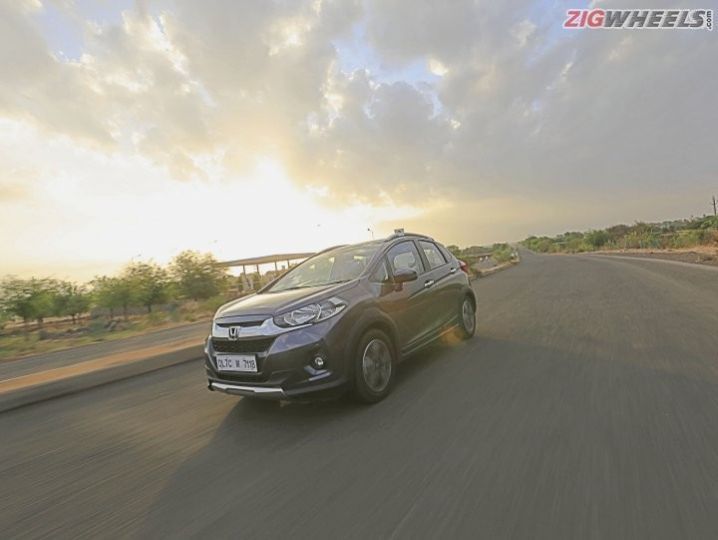 Honda announced today that it has sold over 50,000 units of its compact crossover, the WR-V, in its first year in the Indian market. The Japanese carmaker says that the crossover based on the Jazz accounted for 28 per cent of total sales during the past 12 months. In fact, while other cross hatches such as the Hyundai Elite i20 Active, the VW Cross Polo and the Fiat Avventura have failed to light up the segment, the WR-V, with its rugged cladding, a high and flat bonnet, and acres of space, has managed to give compact SUVs such as the Ford EcoSport a run for their money.

“This is a very proud moment for us. The Honda WR-V has witnessed great success in the Indian market and the 50,000 sales milestone validates its strong presence. It has emerged as a strong volume model in Honda’s model lineup striking the right chord among young urban customers who are looking for status, comfort and have an active lifestyle,” said Yoichiro Ueno, president and CEO of Honda Cars India Ltd.

Unlike most crossovers which do well only in Tier I and Tier II cities, the Honda WR-V seems to be a popular choice across the country. This could be down to the fact that the WR-V boasts an SUV-rivalling ground clearance of 188mm, which is a boon for most buyers in Tier III cities. Apart from this, the fact that it is larger on the inside than the Jazz and other direct rivals like the Maruti Suzuki Vitara Brezza, the Ford EcoSport and the Mahindra TUV300 is also likely to have contributed to its popularity. And except for the WR-V, none of the other cars mentioned here offer a sunroof, and boy do we know how much Indians love a sunroof on their cars!

The Honda WR-V is offered with a choice of two engines - a 1.2-litre i-VTEC petrol motor developing 100PS and 110Nm and a 1.5-litre i-DTEC diesel engine that puts out 100PS and 200Nm. While the petrol motor is mated to a slick 5-speed manual gearbox, the diesel motor is paired to a highway-friendly 6-speed manual. Honda says that the diesel-powered cross hatch accounts for 58 per cent of the total sales figure, which isn’t surprising since the sticky fuel is still cheaper than petrol at today’s market rate. The diesel motor, although a tad too noisy, is one of the most fuel efficient engines sold in the country. It has an ARAI-certified fuel efficiency figure of 25kmpl. The petrol motor, on the other hand, returns 17kmpl.

According to statistics provided by Honda, the WR-V is most popular in the north followed by the west, south and east zones, respectively. It has proven to be the ideal city runabout in Tier I cities like Delhi NCR thanks to its high driving position and good ground clearance. The WR-V’s strong sales figures have taken some of us in the office by surprise. While many thought it would fail to do better than other cross hatches, the WR-V has left them in the dust and poses a serious threat to established nameplates such as the Ford EcoSport. While we thought the cross hatch looked a bit ungainly and the diesel motor a bit unrefined, its sales figures suggest otherwise.

Now comes the burning question: has Honda found its mojo back? Well, yes and no. While the Japanese carmaker has two proven products that are known for their reliability in the City and the WR-V, all their cars fall short when it comes to the quality of materials and the overall fit and finish used in the cabin. Its rivals, especially Hyundai, is catching up in terms of reliability, efficient powertrains and features on offer. And with Hyundai set to bring backup in the form of its sister company, Kia, it is high time the Japanese carmaker pulls up its socks and offers something for enthusiasts like it did with the launch of the Honda City VTEC Type-Z back in 2000. The all-new Civic, which was showcased at the Auto Expo 2018, could be a good place to start, don’t you think?