Spotted testing in India, the iconic muscle car with sharper looks will be launched later this year 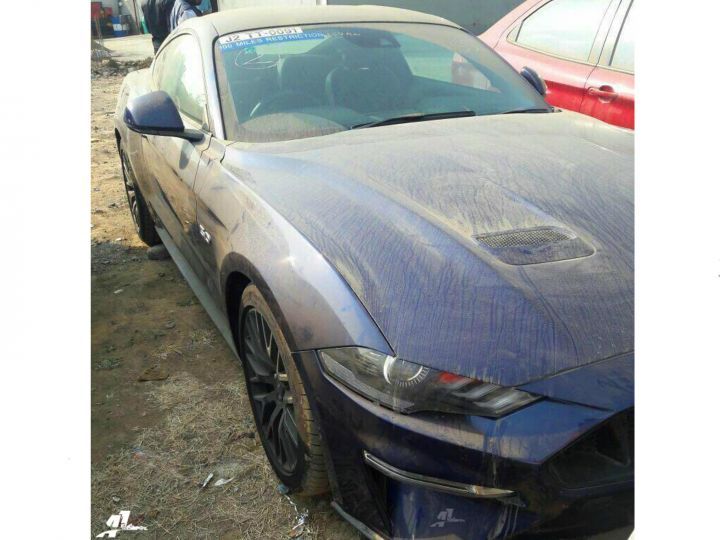 If you go weak in the knees everytime you spot a Mustang, you are not alone my friend! We are in the same boat as you. And today, we have some good news! The 2018 Ford Mustang has been spotted in India. The updated version of the muscle car was spotted at a stockyard in its blue shade without any camouflage and is expected to pack 446PS under the large bonnet. Earlier, there were reports that the updated version of the pony car would come to India in 2018. This picture makes those rumours credible. However, since Ford has decided to stay away from Auto Expo 2018, we expect the carmaker to officially reveal the updated Mustang before the event, which commences on February 9, 2018. Meanwhile, Ford is expected to launch the pony car by Q3 this year.

The 2018 Mustang GT continues to be powered by the same 5.0-litre, naturally-aspirated V8 motor. However, both the power and torque figures have received a bump this time around. Compared to the current model’s 441PS/542Nm figures, the new one makes 466PS of power and 569Nm of peak torque. And though this engine is available in global markets with a 6-speed manual, we will most likely get an automatic gearbox, which could very well be Ford’s latest 10-speed 'SelectShift' automatic transmission. Expect the 2018 car to feature the 'Drag Strip' driving mode as well. By selecting this mode, the car’s brain automatically manages the engine torque, gear shifts and available grip to give you the best launch possible. But, if you crave for more performance, you can opt for the 'Performance Pack' that gives you custom-designed Michelin Pilot Sport 4S tyres. This makes the 2018 version the quickest Mustang ever with a 0-60mph (0-96.56kmph) time of 'less than 4 seconds'.

Now, there is a chance that we might get the car in a lesser tune than the one described above. This is primarily down to the fuel quality in the country. The current model suffers from the same issue as well.

When it comes to the looks, the 2018 Mustang is sharper than the older version. This is because of a redesigned bonnet, grille and bumper. The 2018 model also packs all-LED lighting which includes LED DRLs, headlamps, indicators and fog lamps. At the rear, the LED taillights have been tweaked ever so slightly and, if you want one, Ford will equip it with an optional spoiler too! Also, we believe the new Mustang could be offered with a new orange shade too. We also expect Ford to offer different wheel designs this time around. In the global market, the Mustang is available with 12 different wheel designs. Will all of them be offered in India? Well, we’ll just have to wait and see.

When launched in 2016, the Ford Mustang was an instant hit in the Indian market thanks to its aggressive pricing. So, expect the 2018 model to fetch the same attention as its predecessor. Hence, we expect Ford to give the muscle car a price tag of around Rs 75 lakh.