Eyeing the Ford Freestyle? Check out these points first. 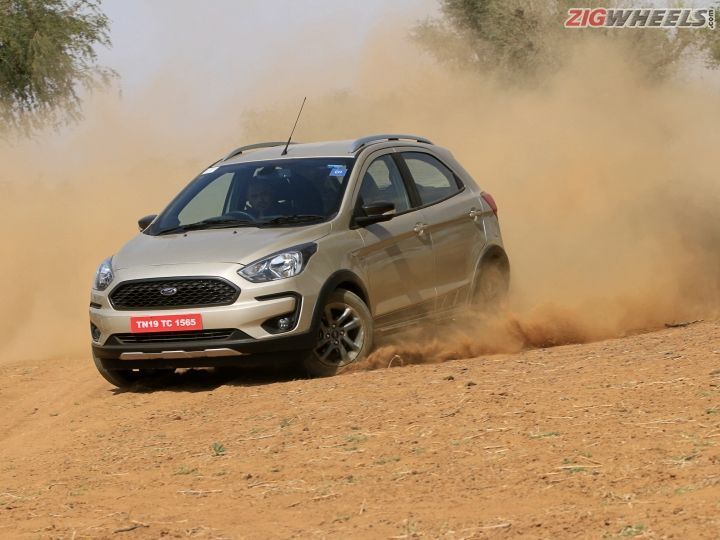 Cross hatchbacks are a thing. They are not particularly popular, but serve as a good option for people looking for a premium hatchback that can take some beating. The latest entry in this space is the Ford Freestyle. Based on the Ford Figo facelift (yet to be launched in India), the Freestyle raises the Figo, adds cladding, and thus makes it look tougher.

Here are 5 things you need to know about the soon to be launched Ford Freestyle.

1. Based on the upcoming Figo

Though we are still waiting to get the facelift Figo, it has been unveiled in foreign markets already. It gets similar looking bumpers, headlamps and a similar looking new front grille. The difference then lies in the way they have been set up. The Freestyle gets a raised ground clearance, gunmetal alloy wheels and a grey grille. Where the Figo facelift has a lot of chrome, the Freestyle gets almost none of it.

Even on the Inside, the Freestyle is the same as the facelift Figo, save for some cosmetic touches like the dual tone dashboard and upholstery. Its gets a host of new features too, but we will get to that bit in the later points.

Like the EcoSport, even the Freestyle gets the new Dragon Series of petrol engines from Ford. Here, it's the all-new 1.2-litre, 3-cylinder Ti-VCT petrol engine which produces 96PS of power and 120Nm of torque. And along with these figures, Ford claims an efficiency of 19.0kmpl. Gearbox is a new 5-speed manual with light, quick and sure-slotting shifts.

We have driven the new petrol-powered Freestyle - check out the review here.

The diesel engine is still the 1.5-litre 4-cylinder diesel which produces 100PS of power and 215Nm of torque. Even this comes mated to a 5-speed manual and the claimed efficiency stands at 24.4kmpl.

That's right, Ford calls the Freestyle a 'CUV'. And to back it up, it has given the glorified hatchback some SUV-ish traits. Like for example, it gets 190mm of ground clearance, just 10mm shy of the EcoSport, and a 16mm higher ride height plus a 30mm wider track over the standard hatchback. And to balance all this out, its gets a retuned suspension too, to stop it from wobbling around. Also, the roof rails aren't just for show; they support up to 50kg of weight.

Even when it comes to electronics, there are features like Active Rollover Prevention, which consist of hill launch assist, TCS and ESP. It cuts off power from individual wheels to prevent the car from, as the name suggests, rolling over. The usual ABS and EBD are present as well. And like other Fords, it also gets 6 airbags and Emergency Assist, which cuts off fuel supply in the event of a crash and shares your location with emergency services.

Ford has not cut corners when it comes to equipping the Freestyle with features. You have a 6.5-inch capacitive touchscreen (borrowed from mid trims of the EcoSport) which runs SYNC3, acts as a reverse camera display and supports both Apple CarPlay and Android Auto. You also have push-button start, automatic climate control, automatic headlamps, rain-sensing wipers, electrochromic IRVM and 4 speakers. These features are spread across 4 variants - Ambiente, Trend, Titanium and Titanium+.

Ford also claims that the Freestyle’s service will be 20 per cent cheaper than other hatchbacks in the segment and a best-in-class service interval of 10,000 kilometres. Also, Ford will pay your entire bill if you are overcharged by the service station!

There is the Hyundai i20 Active, Toyota Etios Cross and the Honda WR-V. As the Freestyle is based on the less expensive Figo (as compared to Jazz and Elite i20), we expect it to undercut the competition by a good margin. But keep in mind that the above-mentioned cars pack more features and are more spacious as well.