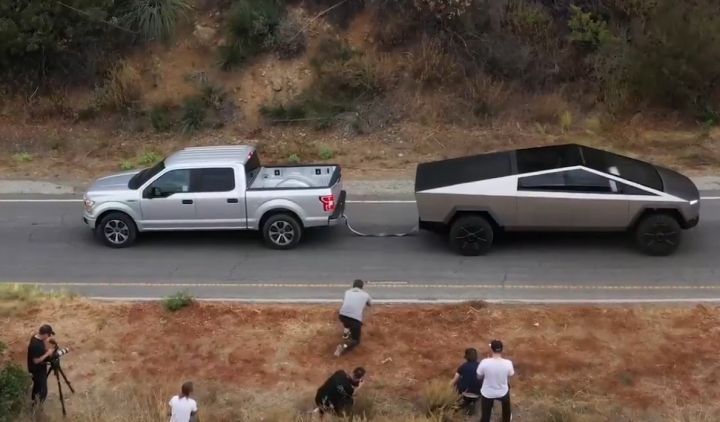 Tesla unveiled the Cybertruck in Los Angeles on November 22, gaining the attention of potential buyers and internet trolls alike. An all-electric truck, a Tesla at that, with a starting price of USD 39,000 (Rs 28 lakh) is an incredible value, isn't it? The company's owner, Elon Musk, posted a video to his Twitter page showing the truck winning a tug-of-war against a Ford F-150. What seems like a marketing gimmick has pushed Ford to call for a rematch. Sundeep Madra, the Vice President of Ford X, called for an apples-to-apples comparison, which Musk accepted. Will Ford put the steel-bodied, funky-shaped Cybertruck in its place? Let’s get into the mechanics of towing to find out.

Remember those videos of SUVs and trucks towing commercial aircraft? Recently, an electric version of the F-150 was seen pulling an entire goods train. Two factors determine how much a vehicle can tow, and neither has much to do with the powertrain. Number one is the normal reaction, or how much weight the towing vehicle has. The higher the weight, the more engine torque can be put to the ground without spinning the wheels. We don’t know how much the Cybertruck weighs. But it would be reasonable to assume it weighs more than a Model X, which weighs 2,509kg in the top P100D spec. That outweighs the F-150’s steel and aluminium frame 1850-1950kg.

Next, there is the coefficient of friction, both static and dynamic. It is easier to pull an object with wheels already in motion than one which is stationary. In Musk’s video, we can see that the Cybertruck starts pulling the F-150 first. The latter, already going backwards, tries to claw back but ends up just spinning its wheels. Also, the F-150 has two driven wheels while the Cybertruck most likely has four. Even worse, the F-150’s driven wheels are the ones with an empty bed over them -- very little weight. So, this is not really an apples-to-apples comparison.

It goes without saying that the differentials, axles, and driveshafts are put under a lot of mechanical stress when towing a heavy load and should be capable of taking a beating. Clutches burn out and torque converters heat up. The Cybertruck has shown that it does not break when undertaking the Herculean task of towing a braked 2000kg trailer, and it has the potential to be an effective pickup truck.

Stunts like this tug-of-war or the F-150’s train pulling or commercial aircraft being towed are carefully engineered events aimed at impressing an uninformed crowd. In the real world, the Cybertruck’s towing capabilities and risks are still unknown, while the (combustion) F-150 proves itself every day.