If you thought that the DC Avanti was going to be a flash in the pan, then you were very much mistaken. DC will soon have two sports cars on sale in India when it launches the TCA in October 2018. The TCA will have a limited production run of just 299 cars, each personally signed by Dilip Chhabria. 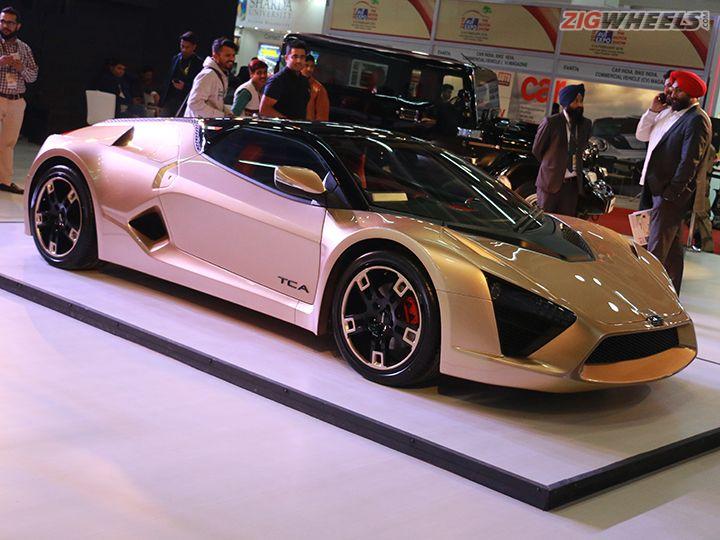 The TCA (which is an abbreviation of Titanium, Carbon and Aluminium) is powered by a 3.8-litre naturally aspirated mid-mounted V6 engine that will drive the rear wheels through a 6-speed automatic gearbox and is good for 320PS. DC claims that the TCS can complete the 0-100kmph sprint in 5.5 seconds, so performance should be fairly brisk.

No weight figures have been specified, but DC claims that it will be lighter than the 1,562kg heavy Avanti. This is possible with the use of titanium in the chassis components and carbon and aluminium in the body panels. The car on display was rolling on 20-inch rims, but DC tells us that the production model will get a 21-inch set. Airbags and ABS will also feature as standard.

DC let a few names drop when it came to speaking about its design and claimed that the TCS has been inspired by the La Ferrari and the Pagani Zonda. In the flesh, it bears a family resemblance to the Avanti and the face is quite nicely done. Even the side profile is quite attractive with a large air intake at the lower rear corner of the door, just in front of the rear wheel.

The rear tail lamps are also nicely designed and sweep all the way across the top edge of the tail section. The rest of the rear though is a combination of a number of air vents and cutouts that seems a little overdone and doesn't quite gel with the rest of the car.

The interiors weren't on display, but DC says that it will be much more luxurious than the Avanti. Head to Hall no 1 at the 2018 Auto Expo to get a glimpse of the TCA