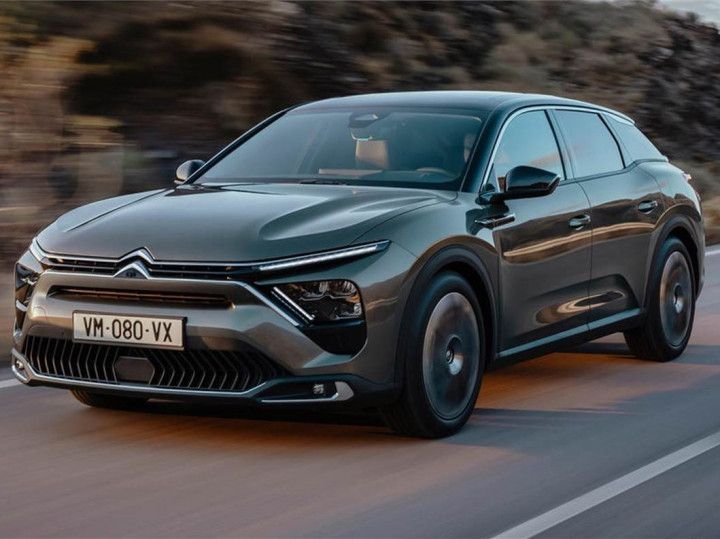 Citroen has revealed the C5 X, a premium crossover that gets the looks, the tech, and the fancy goodies. Offered with a plug-in hybrid option as well, the C5 X makes for a family-pleasing practical option. What’s interesting is the C5 X is a combination of a sedan, an SUV, and an estate. Here are five things that stand out in Citroen’s new flagship model:

The C5 X definitely has the looks! The crossover gets a stand-out design, setting it apart from conventional large SUVs in the market. It sports a sleek design, V-shaped LED lighting, and curvy edges. It also gets a muscular bonnet and some defining character lines running the length of the car. It stands on a massive set of 19-inch alloy wheels and gets an SUV-esque ride height. Despite being 10mm longer than the Fortuner, at around 4.8m, the C5 X doesn’t have that in-your-face appearance but it still manages to leave a lasting impression.

The C5 X promises superior comfort thanks to its Advanced Comfort seats and active hydraulic suspension. The active suspension offered with the plug-in hybrid version gets three modes too. Citroen has focused on ride quality over kerbs, potholes and bumps, as is evident with the C5 Aircross. The C5 X is sure to surpass even the C5 Aircross’ impressive ride quality.

The C5 X gets a large-scale full-colour head-up display, with phone calls and navigation displayed directly on the windshield. The augmented reality-based feature, which is projected within the driver’s field of vision, reduces the possibility of distractions from the road.

One of the main highlights of the C5 X is that it offers level 2 autonomous technology which includes adaptive cruise control and lane keep assist. Safety is also covered by blind spot detection, a 360-degree camera, rear cross traffic alert, and automatic proximity central locking.

While Citroen is yet to reveal complete details of the powertrains on offer, we know the C5 X will get a plug-in hybrid version with a 13.2kWh battery, which is capable of providing 50km of pure electric drive. The setup consists of a 1.6-litre turbo-petrol engine which, together with the gearbox-mounted motor, produces 225PS.

We really hope this crossover makes it to India and Citroen does have something lined up for us now that it has launched the C5 Aircross. The Stellantis-owned French carmaker intends on offering a made-in-India Magnite-rivalling sub-4m SUV, which is likely to arrive early next year.