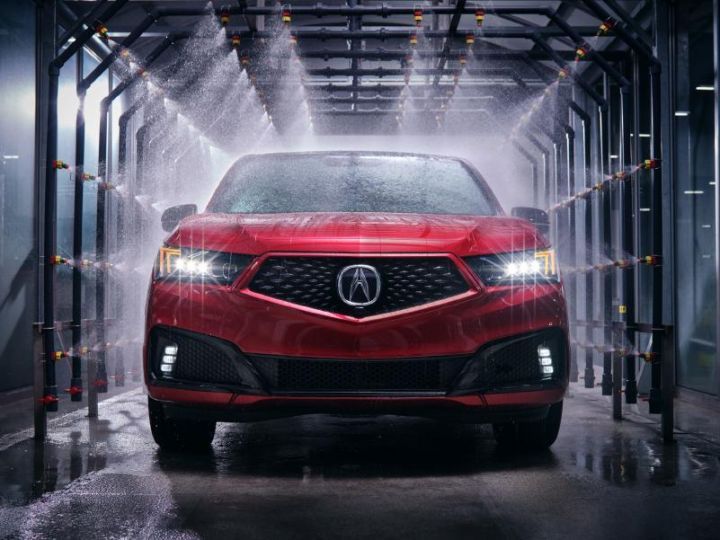 Acura, Honda’s luxury car division, revealed the MDX PMC Edition at the 2019 Los Angeles Auto Show. The MDX PMC Edition is built by hand at Acura’s Performance Manufacturing Center (PMC) in Marysville, Ohio. It is the same place where the legendary NSX sports car is being made. The MDX PMC Edition is limited to 330 units only. It also comes with a handful of exclusive design elements and features to distinguish itself from the standard SUV.

This limited edition MDX is finished in Valencia Red Pearl, Acura’s trademark colour. The fascia is dominated by Acura’s Diamond Pentagon grille with gloss black honeycomb inserts. It is flanked by the jewel-eye LED headlamps that looks mean to say the least. In profile, the SUV stands on blacked-out 20-inch 10-spoke alloy wheels that look sporty and contrast well with the red. The contrasting blacked-out effect can be found in the door handles, wing mirrors, exhaust tips and the roof as well. At the rear, the SUV comes with split-LED tail lamps, dual exhaust tips and a diffuser.

Inside, the MDX PMC Edition comes with sports seats that are draped in Milano leather with red stitching and a dash of Alcantra. The chunky 3-spoke steering wheel comes with a flat-bottom design and is finished in perforated leather with red stitching. There 's an individually numbered serial plaque in the central console denoting that this a limited edition MDX as well. In terms of features, the MDX PMC Edition comes with a 10-speaker Acura ELS sound system, Android Auto and Apple CarPlay, a colour multi-info display, GPS-climate control, blind spot information system, rear cross traffic monitor as well as a 360-degree camera.

Under the hood, the MDX PMC Edition comes with a 3.5-litre direct injection i-VTEC V6 engine that develops 290PS of peak power and 392Nm of peak torque. It comes mated to a 9-speed automatic power and sends it power via all four wheels. Sweet!

We again reiterate. This MDX PMC edition is limited to 330 units. The carmaker has said that 300 vehicles will be allotted to the US while the rest 30 vehicles is for the Canadian market. Prices for the Acura MDX PMC Edition is expected to be in the mid-$60,000 Range (Rs 43.05 lakh). We would also like to see some Acuras in India to take position as Honda’s flagship cars. Acura, are you listening?