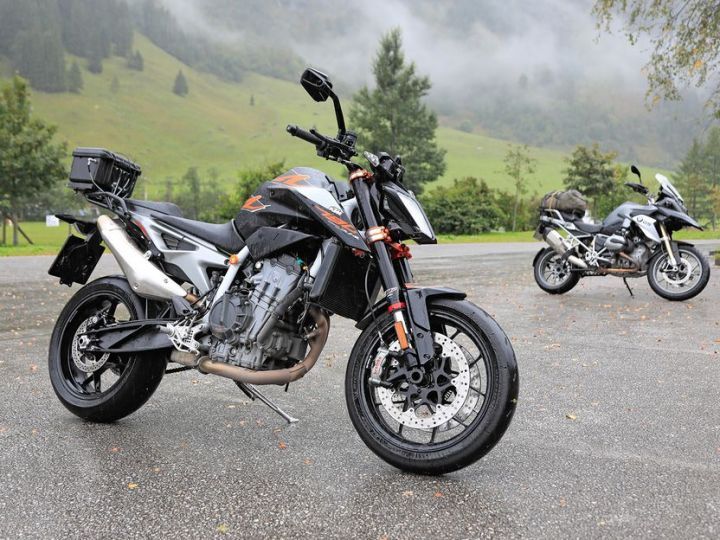 A little over a month ago, we had reported that KTM was working on a sportier version of the 790 Duke with a truckload of mechanical upgrades. From the looks of it, the bike has now moved from KTM’s test track to public roads and seems to be near production-ready.

Almost nothing’s changed from a design standpoint. However, it gets additions such as ‘R’ badging, which seem to be stickers picked off of the 1290 SuperDuke R and placed on the Scalpel at random.  The frame gets a white paint finish as opposed to the black scheme seen on the standard model. But that isn’t the talking point here.

Take a closer look and you’ll notice grippier Michelin Power Cup rubbers instead of the standard Maxxis Supermaxx ST tyres, billet triple clamps, an adjustable WP Apex Pro suspension setup and rearset footpegs that can be adjusted to suit the rider. The braking setup has also been updated with top-spec Brembo Stylema calipers. Though these updates hint towards a more hardcore ‘R’ variant, we’d like to point out that the aforementioned equipment list can be fitted to the standard model as optional extras. So is this is just a kitted out KTM 790 Duke?

What forces us to think otherwise is the bikes engine bay. The exhaust headers, for instance, have two additional sensors apart from the conventional O2 sensors. The wire looms for these sensors are routed under the seat and lead towards the data logger which is stored in the black box mounted on the bike carrier. While the engine looks identical to the unit that powers the standard 790 Duke, it’s likely to be Euro5-compliant. We believe that KTM could be testing different engine maps in a bid to achieve a better balance between more power and lower tailpipe emissions.

That said, this could very well be the 890 Duke that KTM’s been rumoured to be working on in order to meet strict Euro5 emission norms. Not only would this open up a range of possibilities for the brand, but the increased displacement will also help the company retain the 790 Duke with its current levels of performance. All said and done, there’s no official word from the company, so we’d have to sit it out until EICMA 2019 to figure out what the company has planned for the near future.