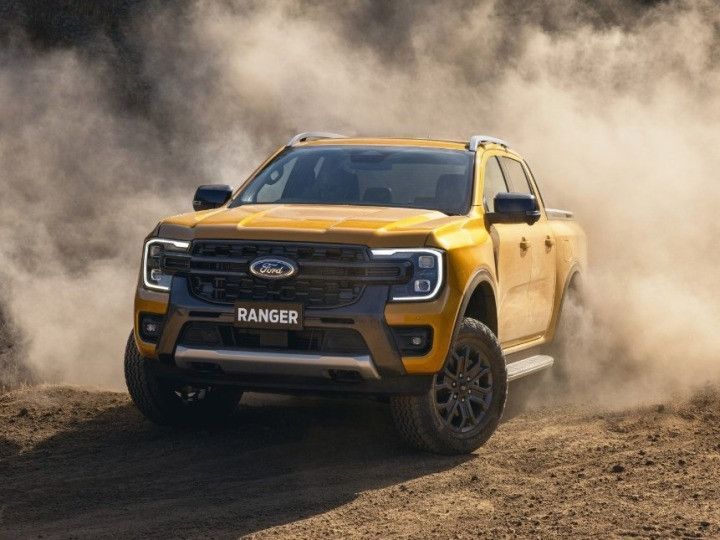 Ford Australia has revealed the next-generation Ford Ranger pickup truck that will be available globally. It is larger and wider than the previous-generation Ranger and comes with a new engine and updated features. Moreover, now that Ford will exclusively sell CBU vehicles in India, the carmaker may consider importing a few trucks to our shores as well.

From the front, the 2022 Ranger immediately seems distinct from its predecessor’s Endeavour-like front fascia. In fact, it resembles the smaller Ford Maverick pickup truck a bit, don’t you think? It has a 50mm longer wheelbase and the truck is 50mm wider than before, with a wide grille and larger Matrix LED headlights. At the rear, the tailgate is embossed with the ‘Ranger’ logo and the taillights are LED units while the cargo bay is a bit bigger too.

Inside, the new Raptor features Ford’s SYNC 4 infotainment system and a 12-inch portrait-style touchscreen (10-inch display on mid-spec variants). The driver gets a fully digital instrument cluster and electronic ‘short-throw’ gear selector. Larger cabin storage units accompany the truck’s size upgrade, and it also has an exterior lighting system that can be operated with the FordPass smartphone app.

Many of the vehicle controls can only be accessed from the touchscreen now, such as the off-road mode. But the essential operations such as audio volume, dual-zone climate control and 4x4 controls for auto, high, low and 2-wheel-drive are still controlled by traditional dials and buttons. That’s right -- it has a full-time all-wheel-drive mode in addition to a part-time 4x4 system (depending on the setup selected). The new Raptor also gets a wireless phone charger, 360-degree camera and USB-C ports.

Under the bonnet, you get a new 3-litre turbo V6 diesel engine paired with a 10-speed automatic transmission but its output is not yet disclosed. It replaces the 3.2-litre diesel that was available in India in the Endeavour prior to the enforcement of the BS6 norms. In the Australia-spec Ranger, it made 200PS/470Nm, but the new 3-litre V6 is expected to produce more power still. Alongside the V6, 2-litre turbo and 2-litre twin-turbo diesel engines will continue to be offered. 6-speed manual and 6-speed torque converter automatic transmission options will also be available. A 2.3-litre EcoBoost turbo-petrol engine is also expected to be on offer, but engine choices will vary for different markets.

The 2022 Ranger previews the new Endeavour SUV, too (known as the Everest in other markets). But after Ford shut down the Endeavour’s production in India, a comeback is not on the cards. If the 2022 Ranger-based Ford Everest does come to India, it is only likely to be brought in as a completely built vehicle, so it’ll be exorbitantly priced against rivals such as the Toyota Fortuner and MG Gloster.

As for the Ford Ranger pickup, we’ll have to wait to see if India is one of the 180 markets that’ll get the pickup truck. It is likely to be priced higher than its predecessor that retails in Australia for the equivalent of around Rs 29 lakh to Rs 40 lakh. Given the sky-high prices of fully built imports in India, we are more likely to see top-spec or niche variants. Would you like to see the Jeep Gladiator and Toyota Hilux-rivalling next-gen Ford Ranger Raptor in India? Let us know in the comments.