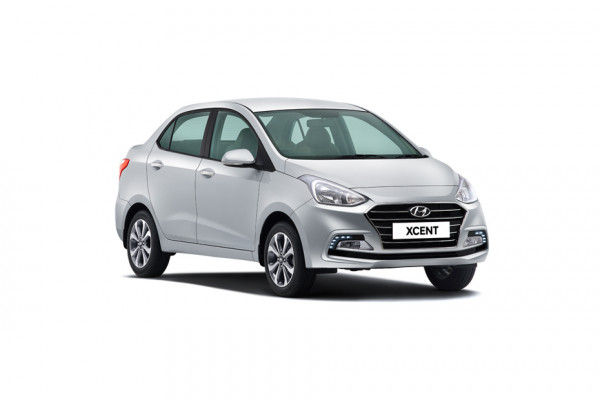 Hyundai Xcent is a 5 seater sedan car available at a price range of Rs. 5.81 Lakh to 8.75 Lakh in India. It is available in 10 variants and 5 colours. Hyundai Xcent comes with petrol and diesel engine options. The Xcent has a boot space of 407 litres while it's ground clearance is 165mm. The petrol engine of Xcent is a 1197cc unit which generates a power of 82bhp and a torque of 114nm. The 1186cc diesel engine of Xcent puts out 73.97bhp of power and 190.25nm of torque. The Xcent is available in 2 transmission options: manual and automatic. The mileage of Xcent ranges from 20.14 Kmpl on petrol to 25.4 Kmpl on diesel.

The 2020 Hyundai Xcent is expected to debut at the 2020 Auto Expo and is likely to cost more than the current car which is priced from Rs 5.72 lakh to Rs 8.77 lakh (ex-showroom Delhi).

Where the petrol motor is buttery smooth, the diesel is equally gutsy. Both motors are 1.2-litre units, but while the petrol produces 83PS/114Nm, the diesel generates 75PS/190Nm. A 4-speed automatic or a 5-speed manual transmission is offered with the petrol engine. The diesel, on the other hand, is available only with a 5-speed manual gearbox. No points for guessing, it is the diesel that’s more frugal of the two. Its ARAI figure is rated at 25.4kmpl, compared to the 20.14kmpl for the petrol engine. Sure, the engines aren’t the strongest in the segment but they compensate by delivering one of the best fuel efficiency figures in the segment.

The variant nomenclature reads E, E+, S, SX and SX (O). Further bifurcations amongst these variants cover the choice of automatic and manual transmissions and, metallic and non-metallic body paints. Let’s make it perfectly clear that the entry-level E variants aren’t recommended. The attractive price might lure you but it doesn’t have much to offer on the comfort, features or convenience front. If you’re after features like the fancy infotainment system, ABS and height adjustable driver’s seat, you’d need to start your evaluation from the SX variant. The range-topping SX (O) is where you’ll get features like 15-inch alloys, shark-fin antenna and automatic climate control.

The design is not exactly outlandish. That said, it is well proportioned and looks better in the flesh than in photographs. The large hexagonal grille flanked by swept-back headlamps gives the Xcent a distinctive look. However, the inverted-L shaped DRLs placed around the fog lamps feels like an afterthought. Apart from the swanky 15-inch alloy wheels, the side profile has little to shout about. The rear is probably the best section of the car to look at. The new wraparound split taillamps blend in nicely with the dual-tone bumper, which has built-in reflectors, and the shark-fin radio antenna sits atop the rear windshield. In short, the three-box package has enough in its kitty to flaunt about.

The dual-tone interior keeps expectations from a car of this size and price at bay. That said, it is one of the most sorted ones out there. The fit and finish is nearly on par with Germans and that’s high praise. Ergonomically, everything is placed where you’d expect it to be and the 7-inch infotainment supports Apple CarPlay and Android Auto. There’s automatic climate control on offer too, with a dedicated vent for rear passengers, which is quite effective. The low rear seating position isn’t as comfortable as some of its rivals and the narrow width doesn’t help either. However, at 407 litres, the boot space is plentiful to gallop enough stuff for a weekend getaway for four. Also, the absence of ABS in most of the variants gets a big thumbs down from us. That said, dual airbags come as standard in all variants.

Honda Amaze : Honda’s workhorse is beginning to show its age. Despite the recent facelift, the Amaze fails to wow. That said, it still is among the most accommodating cars you can buy in this segment.

Ford Aspire : The oldest car in this comparison, the Aspire remains the value buy in this segment for the space, performance and comfort it offers. The age does show through; the Aspire is the only car in the segment to not get a smartphone-compatible touchscreen infotainment system. It leads the pack in terms of safety though, with features like 6-airbags and emergency assist system.

Maruti Suzuki Dzire: The new Maruti Dzire sits at the top of the compact sedan segment quite comfortably. The new generation has improved by leaps and bounds, and is among your best bets if you’re looking at a compact sedan.

Tata Tigor : Tata’s new sub-4 metre sedan isn’t just great to look at, it also undercuts all its rivals in terms of price. The feature list is impressive too but the lacklustre powerplants let it down. And did you know it has a larger boot than the Hyundai Creta?

Volkswagen Ameo: The Polo with a boot isn’t exactly a treat to the eye but the German build quality is certainly top notch. Plus, it is the only car in its segment to feature a 7-speed dual clutch automatic transmission, which comes mated to the most power diesel mill (110PS/250Nm) in the subcompact sedan category.

The price of Hyundai Xcent starts at Rs. To Be Announced and goes upto Rs. 8.75 Lakh. The price of petrol variant of Xcent ranges between Rs. To Be Announced to Rs. 7.82 Lakh. The prices of Xcent diesel variants start at Rs. 6.73 Lakh and the top-end diesel is priced at Rs. 8.75 Lakh. Hyundai Xcent is available in 10 variants and 5 different colours.

What is the price of Hyundai Xcent Top Variant?

The ex-showroom price of top variant of Hyundai Xcent is 8.75 Lakh (Delhi).

What is the mileage of Hyundai Xcent?

What is the EMI of Hyundai Xcent in Delhi?

What are the top competitors of Hyundai Xcent?

What is the boot space in Hyundai Xcent?

The boot space in Hyundai Xcent is 407 L. View full specification of Xcent

What is the ground clearance of Hyundai Xcent?

The ground clearance of Hyundai Xcent is 165mm.