Ford recently showcased their upcoming compact sedan at their plant in Sanand. We pitch it against its sub-4 metre rivals to find out where it stands, at least on paper. For more information on the Ford Figo Aspire log on to zigwheels.com 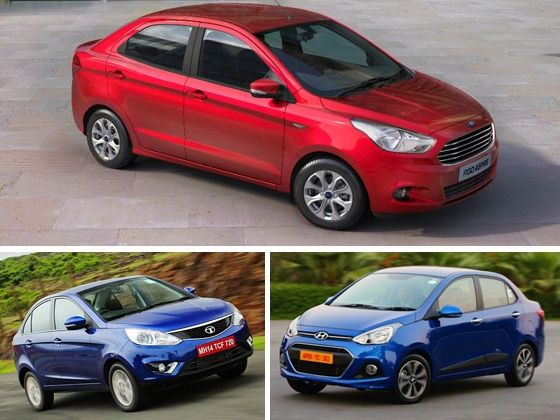 The sub-4 metre sedan class of cars have been observing the most movement in recent years, especially since the time manufacturers have started getting excise duty cuts on these cars. And to make the most of this benefit, manufacturers have been bringing in new offerings in this segment. The latest to be unveiled and set to enter is the Ford Figo Aspire, but where exactly does it stand as far as its competition is concerned.

Engine: When it makes its way to the market, the Ford Figo Aspire will be launched with a 1.2-litre naturally aspirated petrol unit that will make 70PS of peak power and 102Nm of peak torque. In comparison, the Hyundai Xcent makes 83PS and 113Nm while the Tata Zest makes the most power and torque at 90PS and 140Nm. In diesel form the Ford Figo Aspire will sport a 1.5-litre 4-cylinder mill that makes 90PS and 204Nm. Meanwhile its rivals in discussion, the Xcent makes 72PS and 180Nm and the Zest makes 75PS and 190Nm. Now keeping in mind that it is a diesel and the fact that it boasts of better power and torque than its rivals, the diesel trim will probably be the one that brings the number for Ford. While all cars come mated to a five-speed gearbox, the Zest has a diesel AMT on offer while the Xcent comes with an automatic option in the petrol variant. Ford hasn’t revealed any plans of brining in an automatic just as yet.

Features: Aside from looks, space and efficiency, buyers of this class of cars pay equal attention to the features on offer. The Xcent has quite a comprehensive list of features in that regard with features like keyless entry, button start, Electric folding ORVMs and rear view camera with parking sensors among other things. It also gets USB, AUX and Bluetooth connectivity. The Tata Zest on the other hand gets projector headlamps, Daytime Running Lamps, Touch-screen Display and in terms of safety it gets Electronic Brakeforce Distribution aside from ABS. Well aware of the number of features its competition offers, Ford will have to load the Figo Aspire with a long list of features as well. It will come equipped with Voice-Activated SYNC system that allows you to control apps, music and your phone. And if other products from Ford are anything to go by, the Aspire will come well equipped. In fact, the top of the line Figo will have both driver and passenger airbags combined with a host of passive safety features like built in side impact protection and crumple zones.

Interiors and Space: On the inside, the Ford Figo Aspire will borrow the dashboard from the sub-4 metre SUV EcoSport and it sure does look good. With its prominent V design, the Aspire’s dashboard houses an infotainment screen and an array of buttons with phone and media controls. As opposed to the Xcent and the Zest, the overall layout of the dashboard is better designed. In terms of quality though, it might just fall second to the Hyundai.

Keeping in mind that much of the interiors in the Ford Figo Aspire have been borrowed from the EcoSport, space is one aspect that is currently in doubt. But to make a fair statement, the wheelbase of most cars in this class is more or less the same thanks to which enough knee room even at the back. The front seats of the Ford Figo Aspire though have been sculpted in order to create more space at the back, something that a lot of manufacturers have started doing off late.

Efficiency and Price: The Hyundai Xcent boasts of an ARAI claimed efficiency of 19.2kmpl for the petrol and 24.4kmpl for the diesel while the Zest claims 17.6kmpl and 23kmpl respectively. Ford too will have to ensure that the Figo Aspire’s efficiency is promising for it to succeed in the Indian market. Aside from the efficiency the price will also have a part to play. And that especially with cars like the Tata Zest starting from as low as Rs 4.86 lakh going right up to Rs 8.07 lakh for the top-end AMT diesel variant. The Hyundai Xcent is priced between Rs 4.96 lakh to Rs 7.74 lakh. Ford too will have to price the Figo Aspire in the Rs 4.75 lakh to Rs 8 lakh range if they want to compete on the sales charts with such able rivals.

Recommended Variant : Figo Aspire 1.5 TDCi Trend
Was this article helpful Yes No
Sorry about that