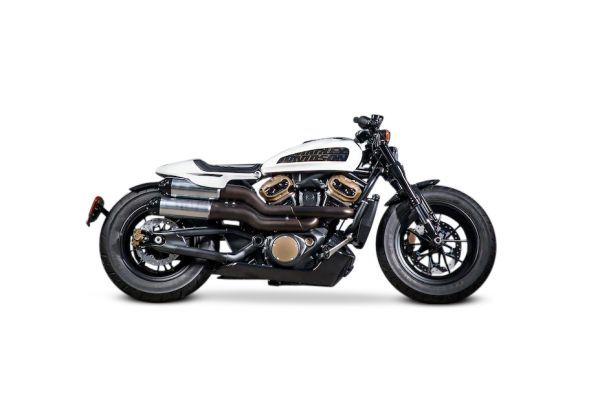 Harley-Davidson announced its grand plans of revitalising its whole business by venturing into new segments. The Milwaukee-based bikemaker plans to launch two adventurer tourers for the first time, along with a streetfighter and an electric motorcycle range. Apart from these, Harley is also going to launch the all-new Custom range in which there will be 5 bikes with engine capacities ranging from 500cc to 1250cc. The planned launch timeline for the Custom range is from 2021 to 2022. The overall design is reminiscent to that of a flat-tracker, with similarly designed exhaust pipes as well. The prototype image of the 1250cc Custom looks lean and mean, with a fat 160-section up front and 180-section rear Pirelli Night Dragon tyres. Riding on 17-inch front and a 16-inch rear alloy, the motorcycle comes to halt using disc brakes on both ends. Harley has used upmarket upside down front forks and the rear monoshock is neatly hidden behind the silencers. The 1250cc V-twin is liquid cooled and is likely to offer punchy performance like the Street 750. The riding position seems to be forward biased, and the lighting system is all-LED. Chief rivals for the upcoming 1250cc Custom would be the Indian FTR 1200 which is scheduled to be launched in 2019.

Harley Davidson Custom 1250 is going to launch in India with an estimated price of Rs. 15 Lakh

What is the expected price of Harley-Davidson Custom 1250?

The price of Harley-Davidson Custom 1250 is expected to be Rs. 15 Lakh.

What is the launch date of Harley-Davidson Custom 1250?

The estimated launch date of Harley-Davidson Custom 1250 is November 2021.