Finally we get our hands on one of the most important cars for Volkswagen India, the Ameo! We tell you how this made in India, for India Volkswagen is to drive 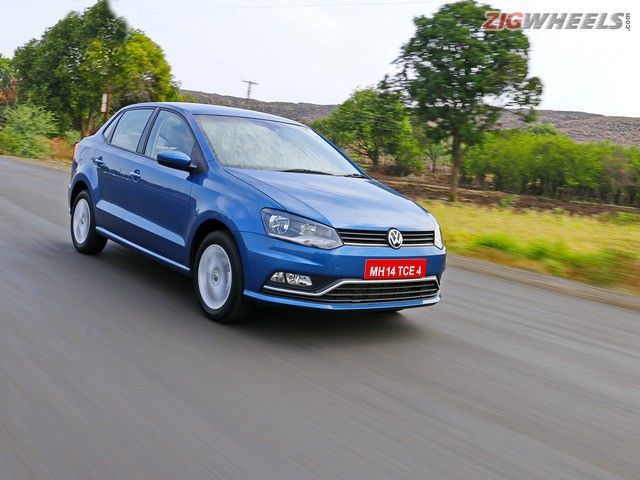 As Indians we have a lot of unique things about us. Be it our food habits, culture or diversity across the nation to name a few. Unsurprisingly, our car market is pretty unique too and the biggest example of this are the sub 4-metre sedans on our roads. The status symbol that a sedan is, we prefer a three-box saloon even if it isn’t as spacious as an equally priced hatchback! Now that’s something that isn’t going to change for a while – perhaps why Volkswagen decided to develop a car specifically for the Indian car market, the Ameo.

It’s exactly a year since Volkswagen confirmed plans of launching a sub 4-metre sedan developed specially for India, and we got to see the car first a day prior to the 2016 Auto Expo. And then came the pricing, along with the elaborate feature list which we’re sure has got other players thinking. We’ve finally spent a day driving the car, so here’s what it feels like in reality.

The Ameo looks identical to the Polo and Vento from the front. This is a good thing since it thus gets the ‘family face’ but on the flip side I was disappointed that there’s nothing to distinguish it from other Volkswagens. There’s subtle differences though, but they are so minute, I learnt about them only during product presentations. For instance, 35mm of the Polo’s front overhang has been reduced, which enabled Volkswagen to add length to the rear, since that’s where it matters more.

So the front bumper is shorter than the Polo’s, but that’s hard to notice. Also, if you look carefully, the Ameo’s front bumper is creased above the fog lamps, which isn’t the case with the Polo. The front wheel arches and 15-inch wheels are the same as the Polo, but the car is different from the A-pillar onwards. The roofline has been lowered by 50mm to make it look proportionate to the rest of the car. Major changes obviously are the back, especially with the distinctive design of the tail lights, which along with the lines on the bootlid attempt at giving the rear a wider appearance, along with the pronounced ‘lip’ for the lid.

The rear looks more proportionate than some of the cars in the segment, particularly the Swift Dzire, though the rear could have looked sportier. There’s some interesting cues though, such as the laser welded roof which looks a lot classier than other cars, more expensive ones included. The paint has a nice even sheen to it, which gives the Ameo a more premium feel. On the whole, this is a well-executed design.

Considering that we’re talking sedans measuring less than four metres in length space is a bit of a premium but Volkswagen has ensured they maximised interior space. The back of the front seats have been scooped out to improve rear kneeroom. I’m just an inch under six feet in height, but even with the driver seat set to my size, legroom and kneeroom at the back was decent. It is also worthwhile to mention that the Ameo’s 330-litre boot is smaller than the Honda Amaze’s 400-litre boot but the loading bay is pretty wide which means loading luggage shouldn’t be an issue.

Moving onto interiors, the Ameo sure looks more expensive than it is from the inside. Interiors are the same as the Polo, and in that sense the Ameo feels familiar, especially from behind the wheel. The clocks, flat-bottomed steering wheel, touchscreen infotainment system are all the same. What’s really nice is the arm rest for the driver, with a storage space inside. That said, the Ameo surprisingly does not a rear arm rest! The interiors feel nice overall – plastics are hard but nice to the touch and fit-finish levels are good, and switchgear quality in fact is better than some of the competitors.

The Ameo is the latest entrant to the sub 4-metre sedan party, which means Volkswagen has had a good amount of time to take a deep look at the offerings of other cars and then create its own list. And the German car maker has done just that – cramming in everything they could think to offer at the Ameo’s price. The list includes segment firsts like ABS and dual airbags as standard across the range, cruise control and rain sensing wipers to name a few.

Then there’s one touch up and down power windows on all four doors, with anti-pinch. The one touch function is something even more expensive cars don’t get for all four doors, and is a boon. Of course, the list doesn’t end at that – the Ameo also gets a rear air-conditioning vent, automatic climate control, a cooled glovebox and an auto-dimming inside rear view mirror. A lot for a sub 4-metre, budget sedan, no? In fact, with its kind of kit, the Ameo is perhaps the most feature-rich car in its segment. Apple CarPlay in the top variant in the Highline variant would have been a nice cherry on the cake though.

Under the hood is the familiar three-cylinder, 1.2-litre petrol for now. The diesel will come in later, which will be the 1.5-litre four cylinder motor. The three pot petrol is refined, but performance isn’t exactly what would make you go bonkers. Performance is decent and the Ameo though not the sprightliest, offers decent acceleration – be it from standstill or through the gears.

The engine has a nice tone to it at the top of the rev range, but at low and mid revs it doesn’t sound too good, sounding a bit gruff like a typical three cylinder engine. The five-speed manual transmission is slick to use and gets quite a workout around twisties or when driving through traffic, as swift overtakes calls for a downshift or two. I expect the DSG gearbox to find its way into the Ameo later though.

Ride and ease of driving 4/5

Suspension setup is on the firmer side, but that doesn’t really translate to a harsh ride. Volkswagen seems to have perfected the balance between ride and handling rather well here. It likes to soak in bumps well, though ride quality isn’t exactly cushy. That said, undulations aren’t really transmitted to occupants, and the Ameo offers a rather good ride on most surfaces.

What’s more, its compact dimensions mean driving or manoeuvring the Ameo around tight spots isn’t much of an ask, and to make your task easier you’ve got the convenience of a reverse camera and rear parking sensors. Add to that a steering that’s light at low speeds and you have a car that’s easy to negotiate most of your mundane stuff like parking slots in malls and city traffic with ease.

Volkswagens are known to be sporty, precise handlers and the Ameo isn’t any different. I like the feel and feedback from the steering – there’s a sense of accuracy and the wheel even weighs up slightly as you build speeds. The firmness of the suspension aids handling well too, as do the MRF ZVTV tyres. That said I would have loved to see the Ameo get the 16-inch tyres we saw on the car displayed at the Auto Expo instead of the 15-inchers our test car had.

The car does offer a predictable feel around corners and is sure footed even when pushed hard, which should help it find favour with the younger lot of buyers. The brakes offer good retardation, and hauling the Ameo down from speeds is easy. Likeable behaviour on the whole from what is supposed to be a rather inexpensive three-box saloon.

The petrol powered Ameo is on offer in three variants. Pricing ranges from Rs 5.24 lakh for the Trendline to Rs 5.99 lakh for the Comfortline to Rs 7.05 lakh for the full-loaded Highline. All prices are ex-showroom New Delhi, and the pricing undercuts not only every other sub 4-metre but also the Polo hatchback! That’s a great price for the features on offer, especially the Highline variant. Also, Volkswagen is claiming 17.83 kmpl for the Ameo, which isn’t too frugal but is decent.

The Ameo on the whole is a pretty nice car, especially when you consider the equipment you get for the money you pay along with the fact that it is a Volkswagen, and is thus a very well-engineered car. Volkswagen has learnt from its previous mistakes and is offering a bucket load features this time which adds to the Ameo’s value for money quotient.

Build quality and quality of materials used is pretty good, which gives the Ameo a more premium feel. What’s more, it is a familiar looking car though that’s something which works in its favour but could also be a bit of a turn off for some. Not a deal breaker though, especially since it drives well, has a good balance of ride and handling, and of course the fact that this car has been made specifically for India. A little thing to be proud of, no?

Recommended Variant : Ameo 1.5 TDI Comfortline
Was this article helpful Yes No
Sorry about that